Football
News
How Neville shook off 'Big Red Nev' to become one of the pre-eminent voices in football broadcasting
Joey Mills
15:00, 18 Feb 2022

Loved by Reds, hated by everyone else: it’s fair to say Gary Neville divided opinion as a player. Often the nucleus of the storm during Manchester United’s on-pitch tussles, he was booed at every ground in the Premier League apart from Old Trafford. Neville was one of those players you adore if he plays for your club and loathe if he doesn’t. Which makes his transition into broadcasting all the more remarkable.

While innumerable ex-players jump from the pitch to the desk, few have done it with the success of Gary Neville. The ex-England right-back has moved beyond being a former footballer brought in to add colour when one of his old sides plays to a voice of real authority. Neville does not just participate in the football discourse, he drives it. Alongside Liverpool legend Jamie Carragher, a link-up that would have been unthinkable at the peak of the “Gary Neville is a Red, he hates scousers” ditty, the 47-year-old sets the agenda for the week’s football debate on Sky’s Monday Night Football.

All of this is a far-cry from the on-pitch Neville. The defender embodied Manchester United at a time where everyone universally hated them. Part of the exalted Class of 92, Neville was the chest-beating heart of the club at a time when Sir Alex Ferguson’s charges hoovered up trophies for fun. With England’s hopes and dreams often pinned to teammate David Beckham, and a quiet appreciation for the abilities of Ryan Giggs and Paul Scholes prevailing, a lot of the hatred for the Red Devils was directed Neville’s way. And he absolutely loved it.

An incident in 2006 best encapsulates Gary Neville, the on-field character. A late winner from Rio Ferdinand at Old Trafford saw United beat Liverpool. Neville’s passionate celebrations in front of the travelling Liverpool support would attract a £10,000 fine for the full-back, the pearl-clutching derision of pundits and the undying hero worship of a generation of United supporters. For Gary Neville the footballer, to be incendiary was as natural as breathing. 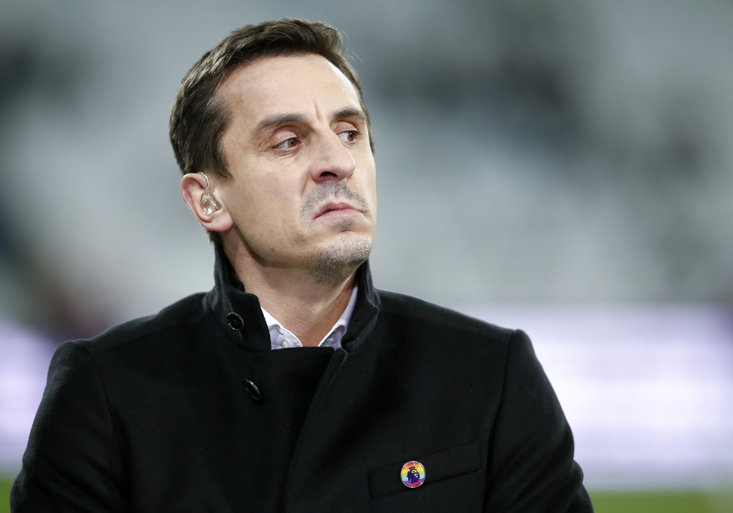 For Neville the pundit though, a decade into a broadcasting career interrupted only by a disastrous stint as Valencia manager, balance is the watchword. Many neutral fans feared the worst when ‘Big Red Nev’ first took up a seat in the Sky Sports studio. But instead of the expected pro-United rhetoric they got an even-handed, thoughtful interpretation of the game. For a player defined by passion, Neville is a pundit of deep and informed tactical insight.

The fact his broadcast career has dovetailed almost perfectly with United’s sustained decline could have tested his loyalties. Instead, Neville has rarely minced his words when describing what his beloved United have become. There was some creeping evidence of his friendship with Ole Gunnar Solskjaer when his former teammate was in the United dugout, but nothing like the ebullient love and praise Rio Ferdinand afforded the Norwegian. For the most part, Neville has been as quick to laud the rise of Liverpool and Manchester City as he has to deride the downfall of United. When the On Air light comes on, it is clear Gary Neville sees himself as a broadcaster first and an Old Trafford icon second.

The evolution of Gary Neville stands in stark contrast to Roy Keane. This is not to criticise the latter’s approach, but it shines a light on the different paths a player-turned-pundit can take. While Neville has disarmed fans with a radically different on-screen persona, Keane is the same glowering presence that patrolled Ferguson’s midfield for over a decade. Like Neville, Keane will criticise United. But he does it in the same withering way he would have done when turning to a colleague on the field, or while giving a controversial MUTV interview. Neville has succeeded as a pundit by defying expectations. Keane has succeeded in the same role by living up to them.

It has been quite the transition for Gary Neville. From an intense on-field presence to a level-headed, iPad-bothering voice of the people. Neville’s views and partnership with Carragher bring as many eyeballs to Monday Night Football as the week’s fixture. A Premier League weekend is not complete until the two former rivals dissect it while pulling little dots around a touchscreen. He’ll always be ‘Big Red Nev’, but Gary Neville has shown us he is so much more.