Kevin De Bruyne turns 31 today and while he can expect no shortage of presents, he is a man with more gifts than most players on the planet. One of the sharpest passers around, an intelligent reader of the game and a player as adept at starting moves as finishing them; ‘KDB’ is the complete package. Coming off the best goalscoring season of his career, with Manchester City looking stronger than ever and a World Cup on the horizon, De Bruyne’s 32nd year could be his most rewarding yet.

De Bruyne may find himself having to adapt his game this season. With no out-and-out striker in the side last season, the Belgian shouldered some of City’s scoring burden. “Some” might be doing the midfielder a disservice in fact. De Bruyne netted 15 Premier League goals, the highest total in the squad.

De Bruyne is unlikely to be the main source of goals in Pep Guardiola’s side next season. City have splashed out £51 million on Erling Haaland. The arrival of the most sought-after young striker in world football is likely to transform City’s attack. While Guardiola is known to appreciate the flexibility of a false nine, something De Bruyne has benefitted from at times, he must now realise the time is right to go orthodox.

While this could slightly curb De Bruyne’s goal output, the 31-year-old was still a consistent scoring threat when Sergio Aguero used to lead the City line. The idea of a KDB-Haaland axis is also a mouth-watering one. De Bruyne already has 86 assists in 210 Premier League appearances. Imagine how many more he can rack up while serving the ball to a man who netted 86 goals in 89 games for Borussia Dortmund. 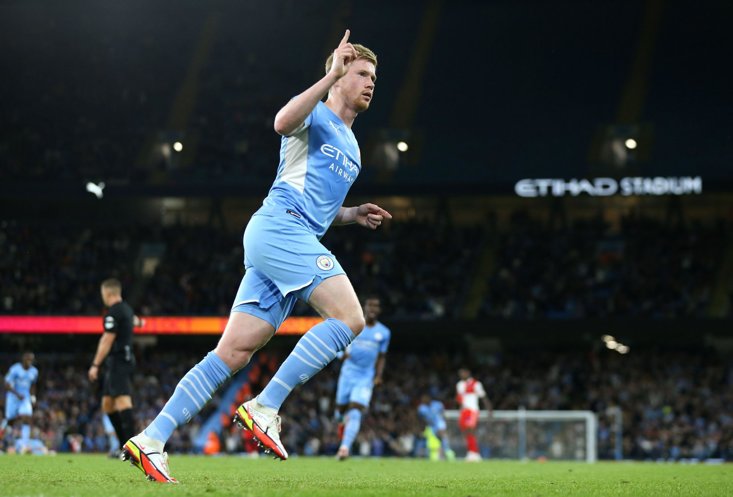 Not content to put the fear up the entire Premier League, De Bruyne will also be making a few international defences nervous this winter. The group stage of the 2022 World Cup in Qatar sees Belgium face Canada, Morocco and Croatia. While the vaunted “golden generation” never quite came to pass, and nobody is making Belgium favourites this time, they remain seventh-favourites with Betfred* to win the 2022 World Cup. This at least means ‘KDB’ is expected to still be strutting his stuff in the quarter finals. A few drops of the inspiration he showed this season will perhaps take Roberto Martinez’s men a step or two further.

While Gareth Bale has just traded La Liga for the MLS at the age of 32 and Sadio Mane has abdicated his position at Liverpool at 30, Kevin De Bruyne at 31 looks a lot like the Kevin De Bruyne we’ve grown accustomed to during his last seven years at the Etihad. He remains not only a consummate professional and a quiet but respected leader but also one of the brightest creative sparks in European football. This year, both Manchester City and Belgium could benefit from that more than ever.