Football
News
Kane wouldn't be the first to take to the fairways if that is his next calling
Conor Keane
08:00, 15 Jun 2022

When you think of footballers who are into their golf, your mind instantly goes to Gareth Bale and that famous banner - Wales, Golf, Madrid. But the Welshman is not the only professional footballer who is a big fan of the sport, and Tottenham Hotspur’s Harry Kane is another keen golfer in his own right.

The prolific goalscorer and England captain featured on Sky Sports’ coverage of The Masters in April shortly after playing against Aston Villa which further confirmed his interest in golf. The 28-year-old is set to feature in the Icon Series in the US at the end of this month as he boasts a scratch handicap.

Kane once made public an interest in becoming an NFL player after football, but when asked whether he would consider becoming a pro golfer when he hangs up his boots he answered: “Never say never.”

If Kane were to make the swap, he wouldn’t be the first footballer to do so. Here are the trailblazers whose footsteps he would be walking in should this ever come to fruition.

Back in the 90s, Dicks was an intimidating left-back who played for the likes of Liverpool and West Ham United. When a serious knee injury ended his career at the age of 29, he turned to golf and developed his talent for the sport. He had a brief professional career as a golfer, competing on the European Professional Tour, but it wasn’t long until his knees derailed his hopes for success on the fairways. 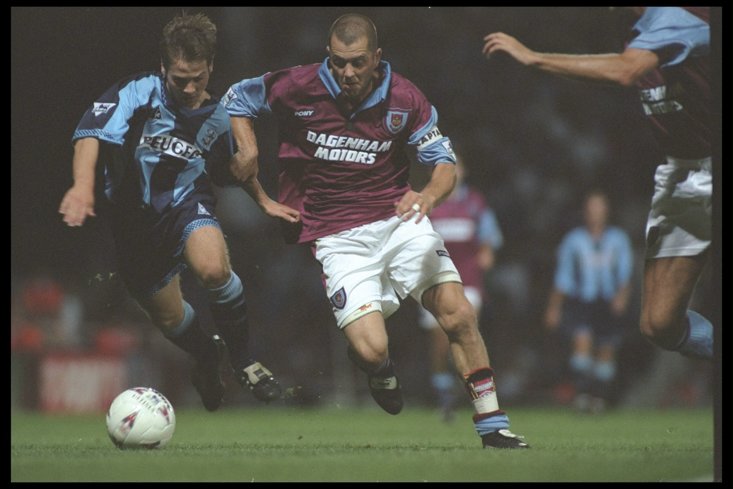 DICKS TURNED TO GOLF AFTER INJURY ENDED HIS FOOTBALL CAREER

Former Manchester United and England footballer Sharpe was always keen to play golf in his spare time during his playing career and stated that Sir Alex Ferguson wasn’t happy about it. He became a professional golfer in 2020 and his handicap fluctuates from one to four. He's played in three tournaments already, including the Ian Woosnam Invitational Day, in which Sharpe finished tied for 23rd, level with the former Masters champion.

American Wegerle, who played for the likes of Chelsea, Coventry City, Queen’s Park Rangers and Luton Town switched the pitch for the green upon retiring from football. He turned professional in 2001 and qualified for the 2002 Dunhill Championships, competing alongside the likes of Ernie Els and Retief Goosen - quite the experience, even if he did finish rock bottom.

The former Shamrock Rovers star retired from football at the age of 27 so he could turn his full attention to becoming a professional golfer. The winger turned swinger is still yet to make it at the top having never made it through the European Tour Q-School Second Stage, but he still feels his golf is good enough to compete.

The Ukrainian legend has been known to be quite the avid golfer and not only does he have quite a talent for it, he competed in the 2013 Kharkov Superior Cup - a pro tournament. His areer didn’t last very long but he continues to play, regularly making appearances on the pro-am circuit across Europe.