Harry Kane continued his glorious scoring form against Everton by netting a brace which put him ahead of Robbie Fowler in the all-time Premier League goal charts but was forced to settle for a point as Tottenham had to fight back after going ahead to earn a 2-2 draw at Goodison Park.

The striker was at his clinical best to net Spurs’ opener midway through the first half, brilliantly controlling a bouncing ball with his toe before slicing a volley home with his left foot. It was Tottenham first real attack of the game and further empathised just how vital the striker’s potency in front of goal is to Jose Mourinho’s side.

However, the lead lasted just four minutes when Sergio Reguillon was adjudged to have clumsily brought down James Rodriguez and Everton were awarded a spot-kick. Gylfi Sigurdsson stepped up against his former club and coolly slotted home the penalty to level the scores. 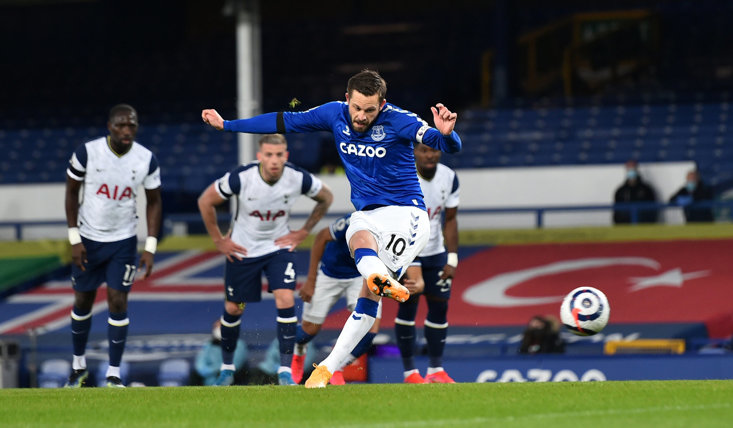 GYLFI SIGURDSSON SCORES FROM THE SPOT FOR EVERTON

Both sides attacked with more verve and energy in the opening 15 minutes of the second half and probed, Spurs enjoying more of a threat but the Toffees looking dangerous and it was the home side who next had the ball in the net.

After Spurs had seen a deflected shot loop onto the top of Jordan Pickford’s goal, Richarlison put the ball past Hugo Lloris but had made an error with the timing of his run and was caught out for offside.

Then came a moment of inspiration from the bench which led to a stunning Everton goal just after the hour mark. Carlo Ancelotti took Alex Iwobi off and introduced Seamus Coleman who took the captain’s armband and made an instant impact. The 32-year-old was full of energy and combined well down the right with Richarlison before putting in a direct cross which Sigurdsson finished exquisitely to put the Toffes ahead.

However, this was a game where advantages didn’t last long and Tottenham equalised six minutes later. With Kane lurking you cannot afford to make mistakes but Michael Keane and Mason Holgate failed to communicate and the former’s clearance hit the back of the latter and the Spurs striker was on hand to fire the loose ball past Pickford.  This was his twelfth goal in 13 games against the Blues and he now boasts more than a goal a game at Goodison Park.

The two teams continued to toil for the remaining 20 minutes and the action was end to end without any real chances being carved open and so it ended all square. Spurs will be worried, as will England fans too, as Kane hobbled off in injury-time after appearing to hurt his ankle and will need to be assessed as Spurs gear up for the League Cup final.

Sadly for Everton, having worked hard to get level and then get ahead, this felt like self-sabotage. So many opportunities they have spurned at home this campaign and this was another. For Spurs too, they have dropped too many points, that’s now 20 from winning positions this season, and they have handed full control to West Ham, Chelsea and Liverpool.

A share of the spoils was no real use to either side and Champions League qualification likely won’t be achieved by either come May - while Everton are six points off fourth, Tottenham are five but have played a game more than the Hammers who occupy the coveted fourth spot.