Be careful what you wish for, because you just might get it. Manchester City were determined to see Harry Kane play his football at the Etihad Stadium this past summer, and the England star finally arrived. It was a successful performance, featuring sublime creative passing and two crucial goals to hand his team the win. Unfortunately for die-hard Cityzens everywhere, this performance came in the colours of Tottenham Hotspur.

Spurs looked strong on the counter early on, with Kane effectively operating in a playmaker role. The Tottenham talisman was playing at a stadium he once wanted to make his home, and the City hierarchy would have been forgiven for looking enviously at the 28-year-old’s work.

Kane unlocked the door for Spurs’ opener, with a superb first-time ball through to Heung-Min Son. The Korean forward battled well and squared for Dejan Kulusevski to slot home. It was a wonderfully worked move from the away side, with Kane at the centre.

Pep Guardiola’s men battled back effectively. Joao Cancelo was a constant threat, and he engineered a superb slalom through the Spurs back line before firing just wide. The full back then worked the space beautifully to find Raheem Sterling. The England winger played in Ilkay Gundogan, who rattled the post with his strike.

Cancelo continued to cause problems getting forward from his full back berth. The Portugal international fired wide from distance, leaving Hugo Lloris at a standstill. The Spurs keeper would falter again shortly afterwards, spilling a whipped Sterling cross into the path of Gundogan, who equalised for the home side. The goal had looked inevitable considering how City had pressed Spurs after the opening goal, but the nature of it will anger Spurs boss Antonio Conte.

Sky Sports Premier League
@SkySportsPL
"The man Manchester City desired has come back to haunt them!" 👀
Harry Kane's brilliant first time finish puts Tottenham BACK into the lead at the Etihad! 😮 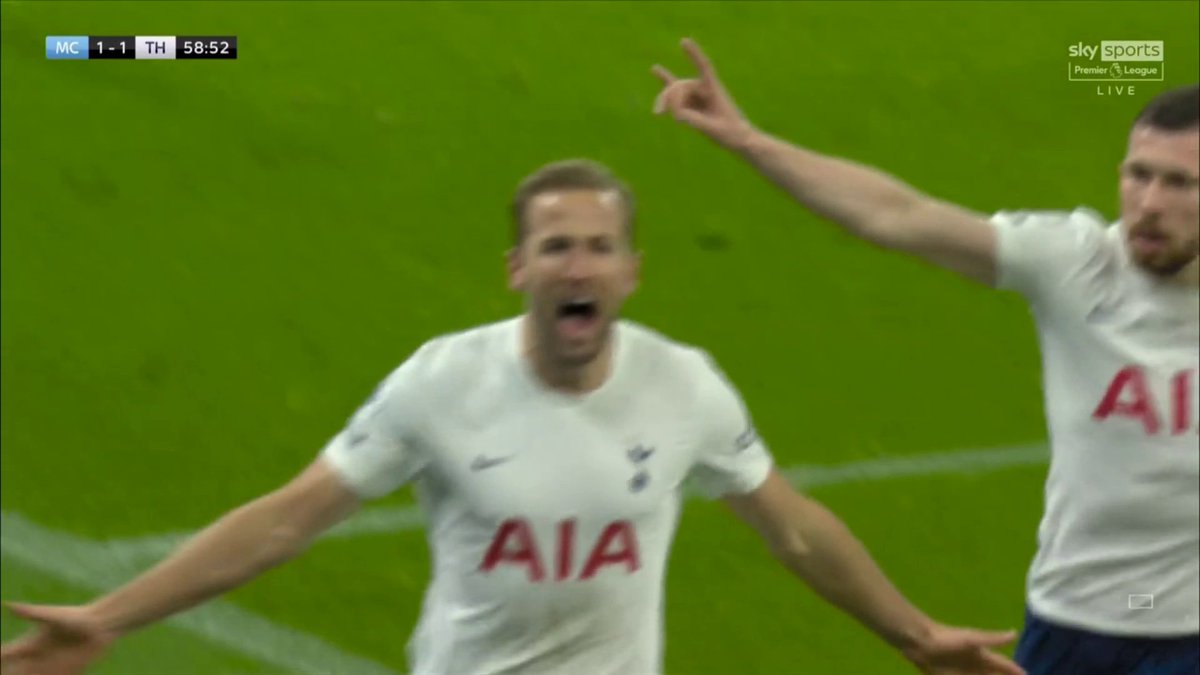 First, Kane threaded an excellent pass through for Son, who had a shot from outside the box saved. Next, the England captain was found by an excellent Son cross, and finished with aplomb to give his side an unlikely lead. These moments of decisiveness in the 18-yard box are exactly why Pep Guardiola is such an admirer of Kane’s abilities. He nearly doubled his tally moments later, when another moment of creative inspiration from Son put him one-on-one with Ederson. The goalkeeper moved quickly to close down the striker, and saved brilliantly to keep City within touching distance.

Kane was denied a second once again, after firing in from a Kulusevski cross. The Swede was adjudged offside when receiving the ball before assisting Kane, and the goal was chalked off. City’s were galvanised by having their goal breached, even illegally, and they fired back like a prizefighter aghast at tasting their own blood. In amongst the attacking maelstrom they created, their frustrations crept in. This anger was typified by Kevin de Bruyne’s petulant foul on Emerson Royal.

There was a late handball claim against Cristian Romero as Bernardo Silva fired a cross in. The Spurs defender was sliding to block the cross when it struck his arm. The penalty was awarded and Riyad Mahrez stepped up to the spot in stoppage time. The pressure never told, as the Algeria international fired his kick into the top corner to draw City level.

This remarkable contest still had one more twist in the tail, and it could only be one man who engineered it. Five minutes into injury time, Kane rose at the back post, out-jumping Kyle Walker to put Tottenham in the lead for the third time in the game. This time, finally, it was enough to beat Manchester City in what represents the finest result of Antonio Conte’s time in charge. A vital moment in Spurs’ campaign to finish inside the top four, and perhaps a lifeline for City’s title rivals, Liverpool.