The picture has been doing the rounds for a while now. You’ve probably seen it. Harry Maguire in France with his mates, watching England take on Slovakia at Euro 2016. It’s a largely unremarkable image of lads on tour, following their team abroad on a mission that was perhaps doomed from the start. Except one of them is now out there on the pitch instead, looking to right previous wrongs.

Together with another picture from after the match against Panama, where he reconvenes with that same group who have come out to Russia to watch him play, it’s sealed Maguire’s reputation as something of an England fan favourite. His impressive performances have helped too of course, but he possesses an indescribable everyman quality that’s hard not to fall for. He even turned up for England duty with his gear in a bin bag.

Playing for his country in a World Cup has capped off Maguire’s journey from a promising young centre back, who made his name in League One with Sheffield United, to someone who now looks established at the top level. It hasn’t been without its difficulties but he’s demonstrated considerable mental strength and technical ability at every step of the way.

Two years ago he was just an England fan, the idea of playing international football little more than a distant dream. One year ago he was relegated from the Premier League with Hull City but made enough of an impression to earn a £17million move to Leicester City. Many saw it as a risky investment in an unproven player. A great season on a personal level has easily justified the deal.

Harry Maguire
@HarryMaguire93
Get in there!! Great character shown from the lads. We go again. @England 🏴󠁧󠁢󠁥󠁮󠁧󠁿🦁🦁🦁 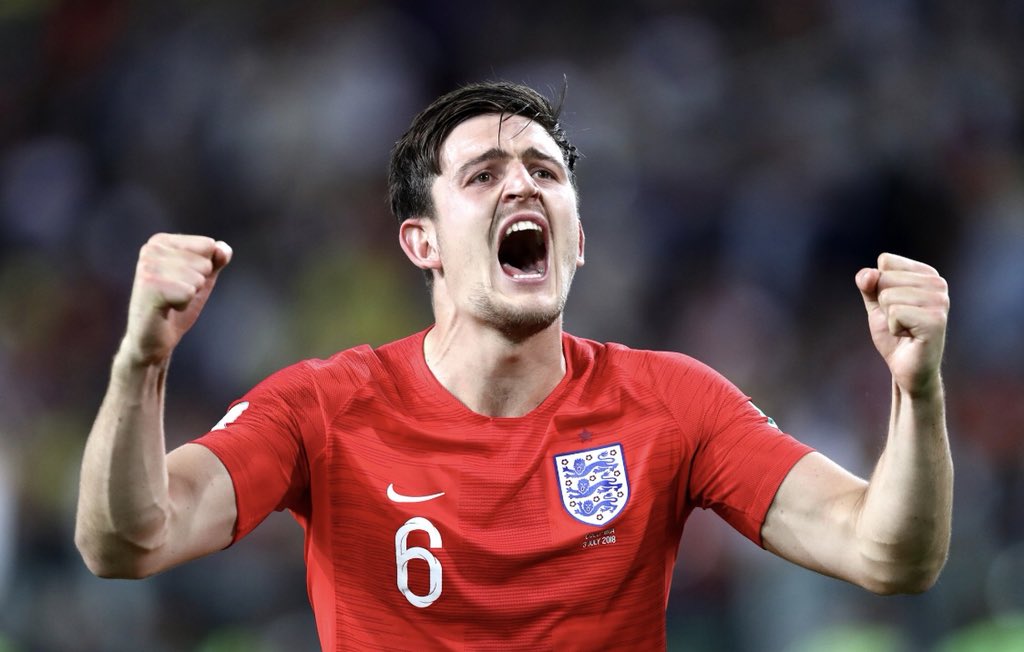 Maguire has made great strides in the last 12 months. He was named as Leicester’s player of the season and forced his way into the England squad. Remaining on the bench during his first call-up, the strapping centre half made his debut against Lithuania in the final qualifying match for the World Cup. It was Gareth Southgate’s first experiment with playing three at the back and a trio of Maguire, Michael Keane and John Stones kept a clean sheet in Vilnius.

Excited by the possibilities that this tactical change offered up, the manager persevered. Maguire played the full 90 minutes against Germany and Brazil in November’s friendlies, as two more clean sheets, and composed performances to accompany them, sealed his place in Southgate’s plans. More experienced defenders like Gary Cahill and Chris Smalling were pushed down the pecking order.

Tall, broad and a little ungainly looking, Maguire is a surprisingly elegant footballer. As well as traditional defensive attributes like strength and heading ability, he’s comfortable in possession too. His ease at bringing the ball out from the back has made him a significant part of Southgate's team. He can both pick a pass, and embark on a rampaging run into space if no option presents itself.

A penalty against Tunisia in the opening group game was the first goal England had conceded with Maguire in the side. It was his sixth cap and he made a telling contribution to clinching the winner late on, when he won the original header from which Harry Kane scored. Last night was another strong display in a pressurised environment.

Maguire’s relative lack of experience might even be a point in his favour. Unlike so many before him, he seems to relish the opportunity to play for England. The novelty factor is still so far from wearing off and as a newcomer to the team he’s unburdened by previous failings. He sees to be enjoying himself, and deservedly so. While many feared that he would be found out at international level, Maguire’s remarkable rise continues.

Curtis Davies #33
@TheCurtisDavies
Four years ago these two students signed for @HullCity…
Four years on they've got better gear and haircuts but also one has played in a champions league final and the other has just reached the World Cup Quarter-finals. Two true inspirations to any young players in the game👏🏽 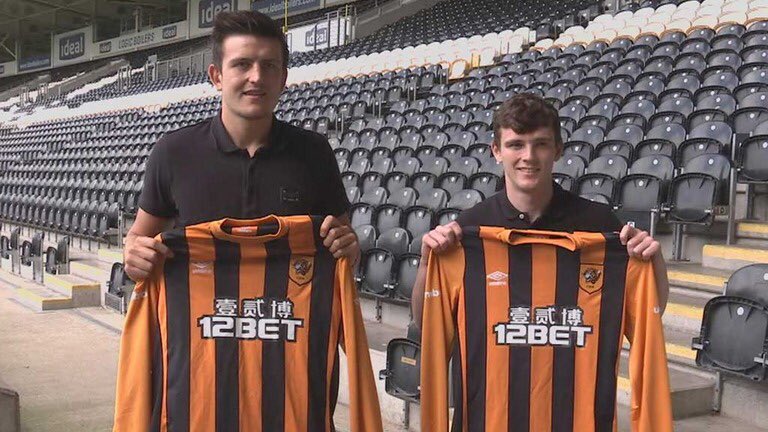 3762
16705
More
football
The Lionesses Who Helped Lead The Charge In Lyon's Coupe De...
For the second time in less than a fortnight, Olympique Lyonnais and Paris Saint-Germain faced off in [ ... ]
football
Five Premier League New Boys That Are Set To Take Next Season...
A swift summer transfer window is on the cards, with just 48 days between Premier League seasons due [ ... ]
football
Bobby Robson And The Most Glittering Chapter In Ipswich Town’s...
Few in Ipswich could have predicted what was to come when Bobby Robson replaced Bill McGarry at the [ ... ]
football
How Tearing Down The Twin Towers Destroyed The Magic Of Wembley
On July 26, 1998, plans for a new Wembley were revealed to the world, promising a national stadium [ ... ]
football
Here's To The 2019/20 Premier League Season: Five Moments That...
It all began on August 9, 2019. 353 days later, a fortnight shy of a full entire year, the 28th Premier [ ... ]
football
Why Figo To Madrid Is Still Football's Most Controversial Transfer...
We’ve had Neymar, Sol Campbell and Carlos Tevez but on this day in 2000, Luis Figo completed the [ ... ]
football
Remembering Laurie Cunningham: The Football Pioneer Whose Legacy...
In 2016 the English Heritage scheme erected a blue plaque in Stroud Green, North London to celebrate [ ... ]
football
Book Review - King Eric: Portrait Of The Artist Who Changed...
Leeds. Irwin. £1million. Title. Double. Palace. Kick. Ban. Seagulls. Return. Liverpool. Double. [ ... ]
football
Replacing Rapinoe And Morgan? The Ladies Who Can Light Up The...
Write off 2020. The best thing about it is remembering how good 2019 actually was. One of the undeniable [ ... ]
football
Wembley Woe: When England Lost To Germany At Euro ‘96
In the summer of 1990 England tasted their first ever penalty shootout heartbreak when they went out [ ... ]
football
Get Ready For A Nostalgia-Fest With Italia '90 Podcast Vincerà!
Hosted by Mark Godfrey and running from June 8th to July 8th, Vincerà! is a 24-part podcast series [ ... ]
football
Harry's Heroes, Vinnie Jones And Revenge At The Battle Of San...
When Vinnie Jones started crunching San Marino players left, right and centre, it was clear the friendly [ ... ]
football
Prodigal Talent Of The German Game Is Turning RB Leipzig Into...
This article first appeared in The Sportsman on 07/12/19 What were you doing at the age of 28? If it [ ... ]
football
''I Was Really Wasted'': When Jurgen Klopp Woke Up Hungover...
This article first appeared in The Sportsman on 05/09/19 Anyone watching the Amazon Prime documentary [ ... ]
football
Book Review - Yer Joking Aren't Ya?: The Story Of Middlesbrough's...
In 1997, Middlesbrough Football Club reached the finals of both the League and FA Cup, had the might [ ... ]
football
Carragher's Brilliant Podcast Shows The Greatest Games Are The...
What’s the greatest football game you’ve ever seen?  Jamie Carragher doesn’t [ ... ]
football
Red Bull And The Football Training Centre Of The Future... Today!
It is now 33 years since Red Bull sold its first ever energy drink. Pre-April Fool’s Day 1987 [ ... ]
football
On This Day Messi's Barcelona Tally Hits 500 In El Clásico Triumph
If you’re going to hit a milestone, and one that no one in your club’s illustrious history [ ... ]
football
The Secret Behind The Success Of Lineker, Shearer And Wright's...
The unavoidable hiatus to the broadcast of the BBC’s flagship football programme will not deny [ ... ]
football
Neymar Jr... Junior! Santos Like The Look Of Ronaldo-Imitating...
On March 7 2009, a slightly-built 17-year-old from Mogi das Cruzes, São Paulo, walked out onto [ ... ]
football
Business As Usual: A Beginners Guide To The Belarus Premier...
If you’re going out of your mind without your football fix, well we’re sorry you just haven’t [ ... ]
football
Why June 30 Could Be D-Day For The Fate Of Premier League Season
England captain Harry Kane has added his voice to the growing calls for the Premier League season to [ ... ]
football
You Heard It Here First - Brescia's Sandro Tonali Is Italy's...
Since winning the World Cup in 2006, it has been turbulent time on the international stage for Italy. [ ... ]
football
A Reunion With Ancelotti Could Resurrect Rodriguez's Stuttering...
No club chews up and spits out world class players quite like Real Madrid. Yet, their sense of entitlement, [ ... ]
football
'Quickly Kevin' Is The 90s Football Nostalgia Podcast To Beat...
While the majority of sports podcasts scramble to fill the minutes within the disruption of the [ ... ]
football
Where Did It All Go Wrong For Phil Neville And The Lionesses?
Winning, Phil Neville recently said at the SheBelieves Cup, is what would bring England’s women [ ... ]
football
''Drop A Few Hand Grenades'' Keegan's Advice To Scholesy The...
A packed out Wembley roared like one of those indomitable Three Lions to greet England’s new messiah. [ ... ]
football
Rise Of The Couch Coach: Coronavirus Causes 119% Surge In Football...
Thousands of us are flocking to virtual reality and gaming to help fill the void of no live football, [ ... ]
football
Review: Diego Maradona - Drop Yourself Into The Great's Chaotic...
When Diego Armando Maradona arrived at Napoli in 1984 for a world-record fee, the entire city ground [ ... ]
football
Arsenal's Tough Choice - Is Donyell Malen The Ying To Aubameyang?
Arsenal’s inability to manage the contractual situations of their biggest stars has plagued them [ ... ]
This website uses cookies
Cookies help us and our partners provide statistics. By browsing this website, you consent to the use of cookies in accordance with our Privacy Policy and Cookies Policy.
Accept & Close