Football
News
The front man proved in the 4-2 win over Leeds that he should be trusted as a number nine
Simon Lillicrap
18:36, 14 Feb 2021

Captain Pierre-Emerick Aubameyang proved his worth to his Arsenal side on Sunday with his first Premier League hat-trick in a dominant 4-2 win over Leeds United. The Gabonese striker was in clinical form, bringing up his 200th goal in the top-five European leagues as Mikel Arteta’s side raced into a 4-0 lead before letting the visitors back into the game.

Aubameyang and Arsenal haven’t found life easy this season, with the 31-year-old missing two recent games due to personal issues and only hitting the net five times in the league this term leading into Sunday's game. Often playing on the flanks to accommodate Alexandre Lacazette, today was proof if any were needed that the Gunners must play their talisman centrally to get the best results. He was simply ruthless in front of goal and took the game away from Leeds with three instinctive strikes.

Arsenal were at their incisive best as the young trio of Emile Smith Rowe, Bukayo Saka and Martin Odegaard all started behind skipper Aubameyang. The first half was a demolition of a Leeds side who have struggled defensively at times this term, and Aubameyang got his first after a brilliant piece of individual skill on the left wing. A quick step-over gave him half a yard of space and he fired past Illan Meslier at the near post to put the hosts ahead.

Having had one penalty taken away from him by VAR after initially being awarded by referee Stuart Atwell, he made no mistake with a second spot-kick, given after Saka was caught by the Meslier. That brought up Aubameyang’s 200th top-flight league goal, with 61 of them coming for Arsenal. 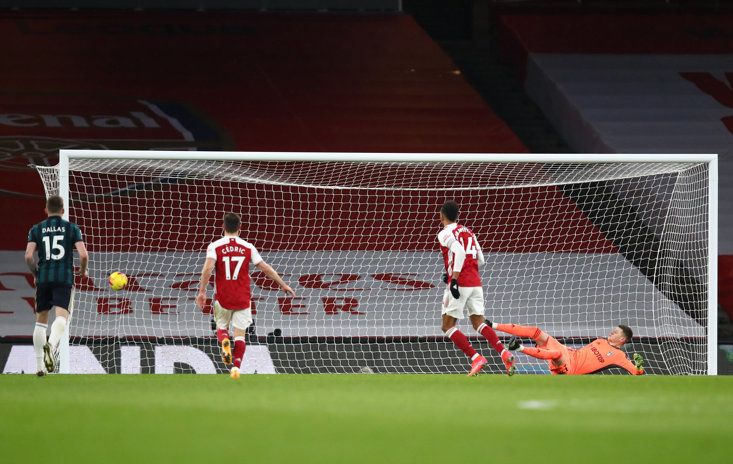 As the man to provide a spark and the man to keep cool from the spot, if Arsenal are to recover from their disastrous early season form and reach the European places, Aubameyang will play a major part. Whisper it quietly but they are now just six points behind fourth-placed Liverpool. He even had a role in the third goal, which was a triumph of teamwork. Saka, Aubameyang, Hector Bellerin, Smith Rowe and Dani Ceballos all combined in the box before the Spanish right-back found some space to drill home. It was a sumptuous first 45 for Arteta’s side, and their dominance continued after the break.

Saka, who provided a constant threat all game from his wide right position, drove at the Leeds back line before Smith Rowe took over and picked out that man again to head home his second hat-trick in Arsenal colours. His last one came in the Europa League semi-final against Valencia in May 2019, but here he provided the clinical touch in key moments. In truth, Leeds were the perfect side to face as he looked to get back amongst the goals.

"I'm happy with the performance. I knew it'd be a hard game - they never gave up," Aubameyang told Sky Sports after the game. "We managed the game well. The hat-trick means a lot to me. I'm a guy who always works hard. It's been a tough time for me.

"Everyone was giving a lot of love to me, my mum and my family. I have to say thank you to everyone at the club and the fans."

Pascal Strujik pulled one back with a bullet header from a corner before Leeds’ foothold got even stronger as Helder Costa scored from a Tyler Roberts pull back.  That was all she wrote for Leeds, however, and it was the Arsenal striker who not only took home the match ball but earned an important three points for his side.

Arteta has got his main man back firing, and with a young supply line consisting of Smith Rowe, Saka and Odegaard, it could be a fruitful run-in for the former Premier League Golden Boot winner. A European finish would be a success for Arsenal this season, and Arteta will be relying on Aubameyang to make it happen.