Chelsea supporters believe that the club have already signed transfer target Leandro Paredes after the player himself retweeted a ‘Welcome To Chelsea’ video on Twitter.

With Cesc Fabregas finally departing the Blues for Thierry Henry’s Monaco on Friday, rumours are rife that the club are eager to find a replacement in that particular area, and if Paredes’ Twitter activity is anything to go by then he looks to be on the verge of becoming - if not already is - a Chelsea player.

The Zenit St-Petersburg midfielder has scored 10 goals and grabbed 15 assists during his time in Russia. He signed for Zenit in 2017 following spells at Boca Juniors, Chievo, Roma, and Empoli, and he could now well be on the verge of adding Chelsea to his CV.

However, Blues boss Maurizio Sarri was coy on any potential incomings, stating in the aftermath of the club’s 2-1 win at home to Newcastle that he didn’t know if the club would find a replacement for Fabregas.

“The club knows very well my opinion. I need a player there.

“It depends on the club decision. I cannot do anything more.”

Despite Sarri’s refusal to indulge any information, many fans are confident that the Paredes deal is done and dusted.

Welcome to the pride of London lad, keep the blue flag flying (@Kaggwamark)

looks like we have gotten our fabregas replacement (@Affinnihayatul1)

So I think Paredes is done and he will come,most likely Higuain too not bad huh Hazard is more good as a winger and I think Paredes will help us in the attack his shooting ability is good and his key passes are gonna help us score more (@UnionChelsea) 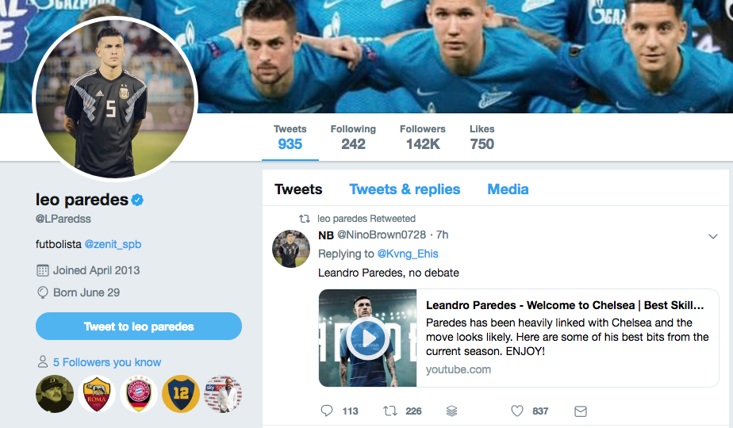