Manchester United survived a spirited Leeds comeback in treacherous conditions to secure a battling 4-2 over their fierce rivals. It looked as if two staggering second half goals in just 24 seconds for the hosts would earn them a point, but Fred came off the bench to score for the Red Devils, before fellow substitute Anthony Elanga added the icing on the cake late on.

United have had criticism all week for their disjointed nature, with rumours of a rift in the dressing room, but the players were all united on the pitch as they fought to the final seconds for all three points. This performance, including the opening goal from under pressure captain Harry Maguire, will do the squad the world of good as they head into a key Champions League clash with Atletico Madrid in midweek.

As Elanga put the fourth goal in, Maguire went to the away end and roared - and the crowd responded to the passion he had shown throughout on the pitch. He needed this performance, and although Manchester United looked shaky for a period in the second half, they were fully deserving of all three points.

The pitch played its part as rain teemed down in Yorkshire, and Leeds were unable to counter their opponents as Marcelo Bielsa had hoped. Robin Koch went down with a head injury early on that saw blood pour from his face, but continued after getting bandaged up.

However, Koch was later withdrawn after complaining about sight issues on the pitch, and it is remarkable that he was allowed to continue. Football has to take concussion protocols seriously, because it still seems that the player is allowed to make the final decision on their health, which cannot be right.

It was a game that was eventually decided by the class on the pitch, even in tough conditions. Paul Pogba absolutely skinned Adam Forshaw on the wing and that piece of individual brilliance should have given United the lead but somehow Cristiano Ronaldo was denied by Meslier from within the six yard box.

Bruno Fernandes then saw his effort parried wide but United wouldn’t let Leeds off the hook. From Luke Shaw’s corner, Maguire bullied his marker to head home United’s very first set piece goal of the season. He’s had his doubters this campaign, with several questioning his ability, but the club have stuck by their captain, and the delight on his face was clear for all to see.

After 140 corners this season for United, one finally went in. 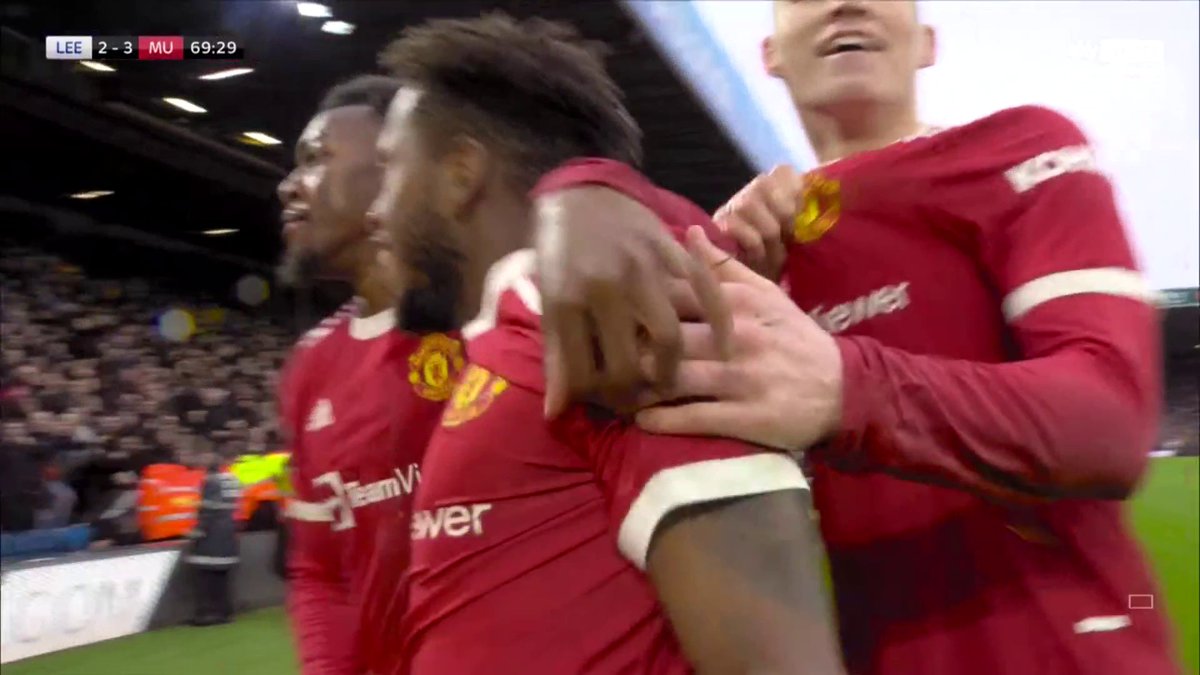 Moments before the break, in the fourth minute of added time, Ralf Rangnick’s side doubled their lead. Once again their inspiration came from the heart of their defence as Victor Lindelof powered his way forward to tee up Jadon Sancho. The winger, who looks to have found his feet at Old Trafford, chipped in a delightful ball for Fernandes to head home.

Just before the break, that goal completely killed the crowd.

Raphinha, having been dropped, was introduced at half-time as Leeds attempted to drag themselves back into the game. In a chaotic couple of minutes, they did exactly that. They got the crowd back onside with a slice of luck as Rodrigo’s cross from the left-wing curled over De Gea and into the top corner.

24 seconds later. The scores were level.

Leeds came out flying as Forshaw crunched Fernandes on the edge of the Manchester United box, and the ball came to James, who squared for Raphinha to tap home. Elland Road absolutely erupted as this historic match came to the boil in unbelievable circumstances.

The away side got themselves back on top after a shaky couple of minutes as Sancho’s effort was deflected wide but they would regain the lead. Questions were asked as Fred replaced Pogba, but three minutes later, he had given United the lead. Fernandes won the ball on the right wing and the Red Devils worked it brilliantly as Fred played a one-two with Sancho, before firing home past Meslier.

Minutes later Elanga should have had a fourth goal for the away side while Klich wasted a good opening inside the box, but he would have the final say. Having been struck with a coin thrown from the Leeds end as he celebrated Fred’s goal, Elanga silenced the Leeds fans as he rolled in a fourth, as Fernandes bagged another assist.

This was much exactly the performance Manchester United needed, in the most testing conditions. Heart, desire and fight earned the three points, as the Red Devils put in their most united performance of the season.