Terri Harper was sensationally stopped in the fourth round by Alycia Baumgardner, losing the WBC super featherweight championship she won in the very same Sheffield ring 20 months ago. ‘The Bomb’ was in control for most of the way, boxing with confidence and exhibiting the power of a fighter who had moved down two weight divisions for this title chance.

Baumgardner established a rhythm early with a strong jab in the first round. She attempted to land power shots, but was punished by Harper, who landed a good combination inside. At the start of the second, a cuffing right hurt Harper. ‘Belter’ was on unsteady legs, pushed to the canvas as the American tried desperately to follow up. Another big right landed late in the round, and it became clear the Yorkshire fighter had a long road ahead to retain her belt.

Baumgardner planted her feet at the start of the third, taking centre ring with a dominant jab. The round was relatively uneventful after a blistering first two sessions, but the fourth round was incredibly memorable. Baumgardner detonated a crushing right to the chin of Harper, rendering the champion out on her feet. The referee acted quickly, doing a brilliant job in making sure Harper did not take unnecessary damage. Harper can rebuild from here, it was her first fight in a year after a series of operations on a broken hand. In Alycia Baumgardner, women’s boxing has a formidable new world champion.

Chris Billam-Smith was made to work hard in successfully defending his European cruiserweight championship. The Bournemouth fighter, who also holds the Commonwealth and British crowns, opened a nasty gash around Dylan Bregeon’s ear, but that did little to deter the Frenchman. Bregeon came bulling forward for most of the bout, looking to tie Billam-Smith up on the inside.

The late rounds saw ‘The Gentleman’ start to pull away, launching the heavy artillery at the close of round nine. As Billam-Smith started to see his punches have an impact, he warmed to the task, backing up his game challenger. The last round tied a bow on a good performance in a tough fight, as he opened up with vicious uppercuts on the inside. The scorecards were wide, which was a fair reflection of the action, but did not tell the full story of just how hard Bregeon had fought to try and leave Sheffield with the European title. 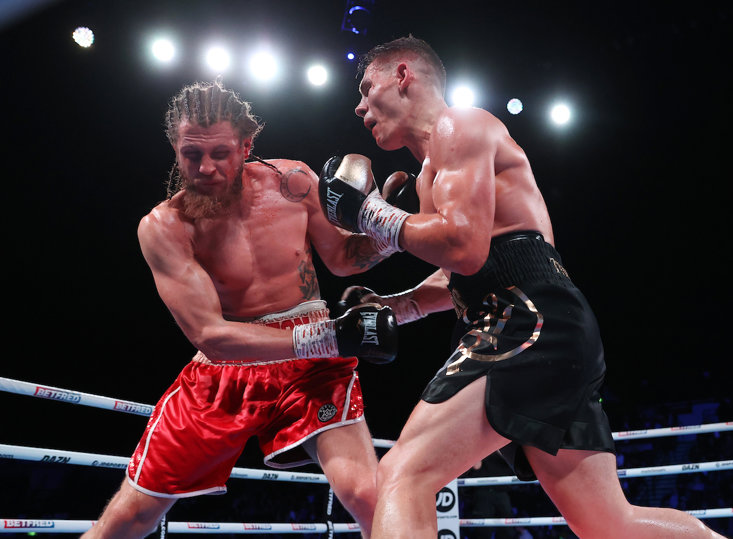 Unbeaten prospect Donte Dixon improved to 6-0 with a good learning fight against Jordan McCorry. The Billy Joe Saunders protege was matched tough, his opponent being a former Commonwealth title challenger. Dixon began boxing well on the back foot, not allowing McCorry to initiate an inside fight. The Scotsman became visibly frustrated as the fight went on, trying to headlock Dixon and throwing in a lot of rough stuff when he could.

Dixon relished the tear-up that was unfolding, and began to back up his seasoned opponent. He took a few more shots than his trainers would have liked, and he was scolded for this approach, but he generally won the exchanges. Dixon ripped in some tremendous body shots throughout, and the strategy bore fruit when he felled McCorry with a right to the gut in the sixth.

Emotions spilled over at the close of a one-sided seventh, with the fighters going nose to nose after the bell. McCorry was slowing though, and the eighth saw Dixon smartly box his way home to take a 77-73 decision on the referee’s scorecard.

Flint was willing, with a high workrate throughout, but could not sustain his attacks against the taller fighter. ‘The Young Lion’ knew he was up against it in the tenth and final round, pouring forward to try and force the stoppage. He started the session well, but ended it being backed up by Hunt, who kept him in check with a thudding left hook. The referee scored the bout 98-93, a fair reflection of the dominance the Junior Witter-trained new champion enjoyed.