Ryan Garcia reminded the boxing world that there is a brilliant fighter behind the social media bluster with a six-round destruction of Javier Fortuna. ‘King Ry’ had the former world champion down three times in the bout, lowering the boom for a sixth-round knockout win.

The win was impressive though, as with anything involving the divisive 23-year-old, it comes with caveats. The bout took place at the 140-pound super lightweight limit, 10 pounds above the super featherweight division where Fortuna briefly reigned as WBA ‘regular’ boss. The win is a solid stepping stone but far from an end in itself.

The endgame as it is being presented is a fight with Gervonta ‘Tank’ Davis. Garcia’s promoter, Oscar De La Hoya was vocal about making it happen in the aftermath. So too Garcia himself, who told broadcasters “I’m not going down to 135 for nothing. But I will fight Tank if he wants it at 140.” There’s those caveats again.

‘Tank’ Davis is the current WBA ‘regular’ champion at lightweight and, while he did hold that body’s secondary title briefly at super lightweight, he vacated that title to return to 135lb. Not for the first time, Garcia is claiming he wants a fight before putting obstacles in the way of it.

This has been people’s issue with Garcia. He’s a good-looking kid, has marketed himself tremendously on social media and has been famous since long before he was world-ranked. His critics feel the hype and notoriety may outstrip his ability and the reason for him building a name on second-rate opponents is to disguise this. Garcia himself is aware of the criticism, saying after the Fortuna win, “I’ll make sure to record all the negotiations (with Davis) so you can’t say I was ducking. I want that fight because it’s going to give me the respect I deserve. I’m never afraid.”

RYAN GARCIA
@RyanGarcia
Getting that Knockout In DIOR was special, thank you to Kim Jones for the Design 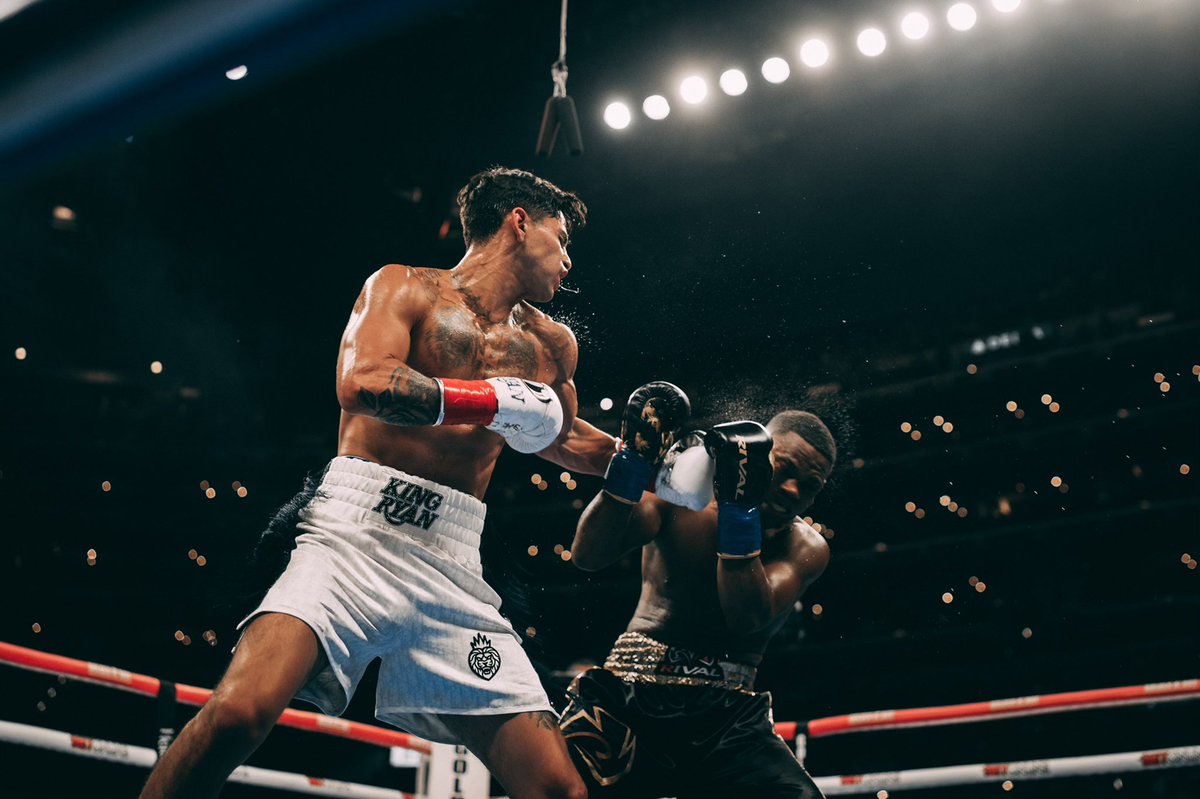 But to say and to do are two different things. Garcia also offered up the name of Teofimo Lopez, the recently-dethroned lightweight champion, as an alternative if the ‘Tank’ fight falls through. The fact he is already looking for an escape route, and one that is wrapped in the red tape of being promoted by rival promoters Top Rank, doesn’t bode well. Add in the fact Lopez is on the comeback trail after a recent loss and it confirms the worst suspicions about Garcia’s approach.

It really is do or die at this point. That might seem a bold assertion about a 23-year-old fighter, but fans are already growing weary of The Ryan Garcia Show. His friends are too. The fighter has had a very public falling-out with former pal and training partner Saul ‘Canelo’ Alvarez.

But where there is adversity there is also opportunity. Right now Garcia is a young fighter coming off a spectacular knockout win. If the fight does come off against ‘Tank’ Davis and he wins, these growing pains will be forgotten. Even bravery in defeat would likely see Garcia better regarded than he is now. An ‘0’ is hollow unless the level of competition is high. Now is the time for ‘King Ry’ to really earn that crown. Nothing ventured, nothing gained.

x
Suggested Searches:
The Sportsman
Manchester United
Liverpool
Manchester City
Premier League
More
boxing
Why Oleksandr Usyk Deserves Your Attention Ahead Of The Anthony...
20th August 2022. Anthony Joshua’s revenge mission. ‘AJ’ looking to gain retribution [ ... ]
boxing
Everyone Who Has Called Out Jake Paul, Ranked By How Good The...
Jake Paul gets called out a lot. There are multiple reasons for this. He’s irritating, which obviously [ ... ]
boxing
Teofimo Lopez Must Take Inspiration From His Lomachenko Triumph...
Teofimo Lopez returns to the ring this weekend to take on Pedro Campa. The super lightweight bout is [ ... ]
boxing
Everything You Need To Know About Teofimo Lopez's Ring Return...
Teofimo Lopez returns to the ring this weekend to make his debut at 140lbs. The former unified and lineal [ ... ]
boxing
25 Years Ago Today: Roy Jones Jr Puts Montell Griffin Out Of...
Roy Jones Jr just did not lose. It wasn’t something he did. Jones didn’t lose when a young [ ... ]
boxing
Thunder And Lightning: Dalton Smith Wins British Title With...
Dalton Smith is not the first man bearing that surname to land a dramatic blow on the big stage in 2022. [ ... ]
boxing
Student Of The Game: Campbell Hatton Comes Through A Tricky...
Campbell Hatton may only be a lightweight, but he carries a heavy burden into the ring with him every [ ... ]
boxing
Everything You Need To Know About Vergil Ortiz Jr Vs Michael...
An unbeaten British fighter goes into the breach this Saturday, as 22-0 Michael McKinson heads to Fort [ ... ]
boxing
Cruise Control: Why Cruiserweight Is The Most Exciting Division...
Chris Billam-Smith and Isaac Chamberlain laid it all on the line on Saturday night. Their glorious 12-rounder [ ... ]
boxing
Matchroom CEO Frank Smith: “I’d Quite Like To Make Jake Paul...
“I’d quite like to make Jake Paul versus Eddie Hearn. I think Jake Paul would do him in. [ ... ]
boxing
The Long Road To The Huge Heavyweight Clash Between Joseph Parker...
Every generation gets the will-they-or-won't-they story that it deserves. The 1980s had Cheers’ [ ... ]
boxing
Heavyweight Champion Usyk Launches NFT Collection In Bid To...
Unified heavyweight champion of the world Oleksandr Usyk has teamed up with leading sports NFT platform [ ... ]
boxing
Danny Garcia And The Fighters Ending Mental Health Stigma In...
In the wake of his majority decision victory over Jose Benavidez Jr, former two-weight world champion [ ... ]
boxing
Everything You Need To Know About Dalton Smith Vs Sam O'maison...
One of the hottest prospects in British boxing, Dalton Smith, returns to the ring in Sheffield this [ ... ]
boxing
Swift Decline? Danny Garcia Is Fighting For His Future Against...
Former unified super lightweight and WBC welterweight champion Danny Garcia returns to the ring this [ ... ]
boxing
Oleksandr Usyk vs Anthony Joshua II TV Channel And Full Undercard...
WBA, WBO and IBF heavyweight champion Oleksandr Usyk’s rematch with Anthony Joshua has a UK broadcaster [ ... ]
boxing
He Ain't Heavyweight, He's My Brother: Jake And Logan Paul's...
Say what you want about the Paul brothers, and believe me I have, but the infamous internet influencers [ ... ]
boxing
Amateur Aspirations: Meet The Team England Boxers Competing...
With the Commonwealth Games just days away, the attention of the English boxing world turns to our hopes [ ... ]
boxing
Everything You Need To Know Ahead Of Billam-Smith Vs Chamberlain...
Two hard-hitting cruiserweights collide on the south coast this weekend when Chris Billam-Smith clashes [ ... ]
boxing
Haney/Kambosos Rematch Set For October: Five Boxing Stories...
The story of Mike Tyson is hitting the small screen, Devin Haney and George Kambosos Jr are set to do [ ... ]
boxing
Gotta Catch 'Em All: Boxing's Most Memorable Catchweight Fights
The upcoming scrap between Chris Eubank Jr and Conor Benn has still not been officially announced, despite [ ... ]
boxing
Know When To Fold 'Em: Miguel Cotto And The Boxers Who Stayed...
Puerto Rican legend Miguel Cotto has no intention of returning to the ring. The happily-retired four-weight [ ... ]
boxing
If Adrien Broner Wants Mayweather Treatment, He Should Put In...
No boxing nickname has ever been more appropriate than Adrien Broner’s descriptor, ‘The [ ... ]
boxing
25 Years Ago: Bernard Hopkins And Glen Johnson Meet Before They...
25 years ago today Bernard Hopkins stopped Glen Johnson in 11 rounds to retain the IBF middleweight [ ... ]
boxing
Knights, Kings And Bouncers: The Men Who Have Held The British...
The British Boxing Board of Control has ordered a fight between Fabio Wardnley and Nathan Gorman for [ ... ]
boxing
Ryan Garcia Risks Getting Lost In The Shuffle As Boxing Moves...
Ryan Garcia is making up for lost time. ‘King Ry’ did not fight for 16 months after his [ ... ]
boxing
Wilder Eyeing Up Usyk/Joshua Winner: Five Boxing Stories You...
With more news on Deontay Wilder’s next opponent and a potential British blockbuster bout inbound, [ ... ]
boxing
When The Thunder Stopped: The Final Fight Of Arturo Gatti
Great boxers rarely get the ending they deserve. There are the rare exceptions. Lennox Lewis going through [ ... ]
boxing
Chris Eubank Vs Nigel Benn: The Rivalry That Enraptured A Nation
Conor Benn and Chris Eubank Jr look to be on the cusp of agreeing a catchweight fight. Career welterweight [ ... ]
boxing
Benn-Eubank Jr, Fury's Return And Canelo-Bivol II: The Fights...
Unlike most other sports, boxing has no fixture list. Fights are made in a complicated series of negotiations, [ ... ]