We are now just days away from the opening match of Euro 2022 and excitement is at fever pitch for the dawn of this home tournament. Sarina Wiegman’s women have thumped Switzerland and the Netherlands in their warm-up games and now have Austria at a sold-out Old Trafford in their sights. With 16 teams taking part in this showpiece event on home soil, we’ve broken down the groups to pick out some star names to keep an eye out for.

Group A features the host nation England, along with Austria, Northern Ireland and Norway. All eyes will be on Wiegman’s stars, who have thrilled us in recent weeks with their performances and now the manager has some tough decisions to make regarding her starting XI.

Ellen White is currently the 5/1 favourite to win the Golden Boot and given she is the country’s top ever goalscorer with 50 to her name, if she can get fit and firing she is likely to be a key weapon for the hosts. In our betting preview, we didn’t tip up the Man City forward but instead Beth Mead to be the top scorer. The Arsenal forward has enjoyed a flying season and now bagged 22 goals in 39 international appearances, giving her a better goals to game ratio for her country than White.

England have an embarrassment of riches in attacking areas. Alessio Russo, Lauren Hemp, Chloe Kelly, Bethany England and Nikita Parris should all feature at various points - while at the back Lucy Bronze is still the star name. Leah Williamson is likely to drop back into the back four and could impress, while Mary Earps has established herself as the number one goalkeeper with some fine performances. They will be under huge pressure playing a home tournament, but they have an abundance of talent that is likely to catch the eye.

Elsewhere in Group A, Norway’s Ada Hegerberg is back playing after her five-year absence from the national team and the 2018 Ballon d’Or winner has all the ability to steal headlines. The Lyon forward has had rotten luck with injuries over the past two years but is now back in action, and could take Norway to a whole new level. She’ll almost certainly add to her 42 goals in 70 games for her country and will be desperate to make up for lost time. 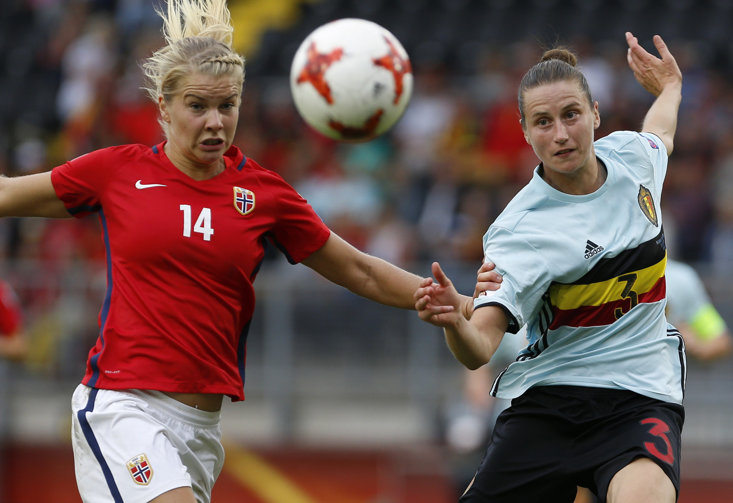 The Norway forward is back in international action

Chelsea’s Maren Mjelde is the rock-solid captain with 153 caps to her name and provides valuable experience while Barcelona’s Caroline Graham Hansen has taken on goalscoring responsibility from Hegerberg in recent years. Meanwhile SK Brann duo Guro Bergsvand and Elisabeth Terland should be worth keeping an eye on. Bergsvand is a defender with a knack for goalscoring while Terland is a 21-year-old forward that will be hoping this is her breakthrough tournament. There’s a whole heap of attacking talent in this Norway squad, they are ranked 11th in the world, and they could cause problems in England this summer.

England’s first opponents Austria will provide a good test early on. WSL fans will have their eyes on Arsenal goalkeeper Manuela Zinsberger while club teammate Laura Wienroither will be hoping to break into the starting XI. Captain Viktoria Schnaderbeck, who uniquely went on loan from Arsenal to Tottenham last term, will play a huge part in their defensive success.

Hoffenheim’s Nicole Billa will be relied upon for goals with 43 for her country already, while Bayern Munich’s Sarah Zadrazil could shine in central midfield. Barbara Dunst is another that could have a breakthrough tournament on the wing, she currently plays for Eintracht Frankfurt in Germany, where 14 of the squad play at an elite level in the Frauen-Bundesliga.

Northern Ireland offer an interesting prospect. Little is expected of the side ranked below Thailand and Uzbekistan in the world rankings and having lost their last four, including a 5-0 defeat to group rivals England, it could be a tough tournament. But they still boast some talent in their ranks.

Liverpool’s Rachel Furness has been their standout star for a decade but at the age of 34, her powers are waning. Experience is a running theme in this squad, with 37-year-old Julie Nelson is on 125 caps, while her defensive colleague Ashley Hutton is 34, with over 100 caps to her name. At the other end of the scale we have Emily Wilson, Joely Wilson and Caitlin McGuiness and although they are unlikely to make a major impact, they do offer some hope for the future. Unfortunately for Northern Ireland, 13 of their squad play in their home country, and the standard isn’t quite as high as the rest of Europe.

Five Group A stars to watch:

The Sportsman’s Group A predictions: