If that sounds good, imagine you can also get there free of charge and don’t have to pay a single penny for a drink at the ground. Well, Imagine no more. For it's set to happen this month.

Now, before you get too excited, we have to reveal that this deal is only open to 16 to 18-year-olds in the Greater Manchester area but we think this is an amazing initiative.

In an age where the Bundesliga in Germany and football on the continent leads the way for accessibility while ticket costs here have priced out so many locals from watching their team, it’s great to see United and City join forces with the Greater Manchester Combined Authority to make football affordable.

Youngsters will be able to watch Champions League and Europa League matches at the Etihad and Old Trafford for five pounds.

With the ‘Our Pass’ card, which will cost a one-off £10 fee, supporters will be able to watch City’s home group matches against Atalanta and Shakhtar Donetsk while United supporters can see the Red Devils’ games when they host FK Partizan and AZ Alkmaar. 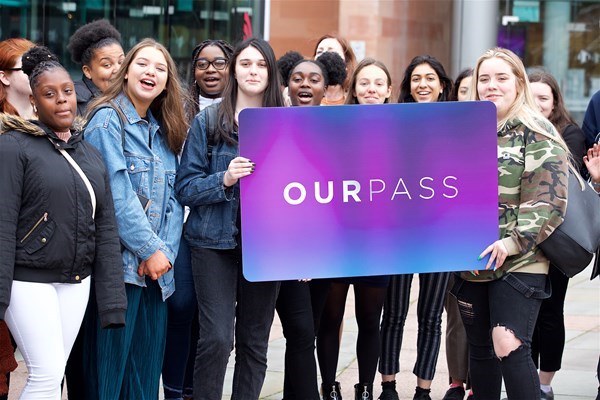 Mayor Andy Burnham
@MayorofGM
🚨 Important news! 🚨
@ManCity and @ManUtd are in the new wave of opportunities Our Pass card holders will be able to access this October.
Andy said: "I'm so grateful to our two great clubs for joining forces and getting behind Our Pass."
Find out more:
5
15

Hopping on the bus for free to the ground, they can also get half-price tickets on the city’s Metrolink.

If that wasn’t cool enough, the pass also gets you into all of the under-23s home fixtures for free while you can see Manchester United Women for just three quid.

Mayor of Greater Manchester Andy Burnham is delighted the two clubs have got on board and said: “I want Our Pass to open the doors of the best places in Greater Manchester to young people of all backgrounds. I don’t want anyone to be left outside because they can’t afford the cost of travel or tickets.

“That’s why I’m so grateful to our two great clubs for joining forces and getting behind Our Pass. Their support takes it up to a new level and sends such a powerful and positive message to the young people of Greater Manchester.”

Colin Bridgford, chief executive officer at the Manchester FA, added: “The Manchester FA is the home of grassroots football in Greater Manchester and we are committed to providing football for all, so we are delighted to see so many of the city-region’s local teams unite behind Our Pass and inspire young people to get involved.”

So if you’re a teen in the local area, now is your chance to see Sergio Aguero and Paul Pogba live and up close.

FOOTBALL FOR A FIVER