Football
News
The Mansfield boss can't match his father for trophies, but he might beat him on longevity
Simon Lillicrap
09:05, 28 May 2022

Darren Ferguson followed Sir Alex and Lee Johnson joined Gary into the managerial arena, but few sons have felt the weight of the name of their father more than Nigel Clough. That surname is ingrained into English football as the legendary manager changed the course of history for Nottingham Forest and Derby County, but now at Mansfield Town, his son is making some memories of his own.

This weekend, Clough’s Stags will head to Wembley for the League Two play-off final vs Port Vale, with the aim of securing his second Football League promotion.

“My dad used to tease me that I would never beat him at anything,” he told the Daily Mail after he got the job in November 2020. “He said I wouldn’t score more goals or be as good a manager. He was right.

But Nigel is doing himself a disservice when he puts down his own credentials as a manager. Sure, he hasn’t led Derby to the Premier League title or won back-to-back Champions Leagues with Forest (yet), but he’s carved out a more than respectable career in the Football League.

In fact, his turnaround at Mansfield is one that deserves immense credit and speaks volumes about his character as a manager. Last term he joined a club that was winless and kept them up comfortably, but what he has done this season is even more remarkable.

Having put together a competitive squad over summer, injuries and suspensions decimated the side - wiping out all seven centre-backs at one point - and this led to a miserable run of form. Despite going 14 games without a win meaning the club was joint-bottom with a pathetic Scunthorpe outfit in October, the fans stuck by him. 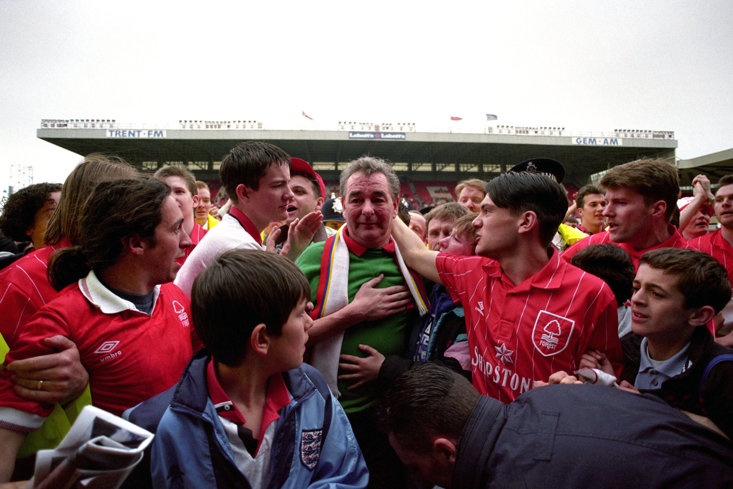 Clough promised the team would be competitive when fully fit, and the board deserves credit for not pushing the panic button, but they would be duly rewarded. Mansfield went on an incredible run of success that saw them break the club's league records for successive wins (eight) and successive home wins (11) as they went 14 unbeaten. The Stags won 14 and drew one of their last 16 home games as they flew into the play-offs and having disposed of Northampton in the semis, have their eyes on promotion.

After his success at Burton Albion, which saw him take the relative minnows to the Championship - it seems like this part of the world has a true affinity for the Clough family. Just 30 miles separate Mansfield and Burton, with Nottingham and Derby lying in between the two towns, and it would be a fitting weekend for the Clough family if this part of the country produced two Wembley wins this weekend.

“The River Trent is lovely, I know because I have walked on it for 18 years,” his father once said. Having led the club through its most successful period ever, Brian would have been desperate to see Forest return to the Premier League, but watching his son become a Wembley winner would fill his heart with joy.

Brian won five of his seven Wembley finals, all of them with Nottingham Forest, but this will be his son’s second appearance as a manager at the national stadium. He lost an FA Cup semi-final with Sheffield United in 2014, but this time will lead his Mansfield Town side out with a huge amount of pride, Although his father has clearly influenced him massively, he’s become an impressive manager in his own right.