Rugby League
News
Steve McNamara’s men got the job done against a battling Hull KR side and will now head to Old Trafford
Simon Lillicrap
21:50, 30 Sep 2021

Catalans Dragons are heading to the Grand Final for the first time in their history after a scintillating display saw them beat Hull KR 28-10 in Perpignan. The League Leaders’ Shield winners, who were heavy favourites heading into this tie, proved their superiority and are now heading to Old Trafford next weekend where they will face Leeds Rhinos or St Helens.

Despite some persistent attacking play from Hull KR, who refused to lie down, Catalans had enough about them to overcome the issues that Tony Smith’s team posed. Despite defeat, Smith, who we caught up with earlier this week, should be incredibly proud of the job he has done with Kingston Rovers who finished bottom of the league last year.

But this game proved to be a step too far for the English side that have thrilled us this season. Stand-in Catalans full-back Arthur Mourgue was at the centre of the action throughout and thought he had got the opening try of the match when he crossed early on but he was denied as the video referee ruled it out for double movement. However, the favourites would go 6-0 up moments later as Ben Garcia was given a pocket of space and crossed from close range.

Hull KR came back fighting. Mourgue ducked two catches as the pressure mounted from the English side but they couldn’t find the leveller despite some positive play. It seemed as if both teams were vulnerable when they didn’t have the ball, with plenty of exciting rugby testing both defences, but the side from Perpignan thought they had a second midway through the half.

Fouad Yaha was left with an acre of space on the left wing and was picked out to cross, under no pressure, but the referee James Child had adjudged the pass to him to go forward. If Tony Smith’s side got away with that one slightly, they were brutally punished on the half hour.

Josh Drinkwater, who played for Hull KR in 2019, returned to haunt them in dramatic style. As the visitors pressed forward, he intercepted a loose pass and charged 80 metres unchallenged to double Catalans lead. In his second stint with the Dragons, he showed exceptional pace to cross in style against his former teammates, 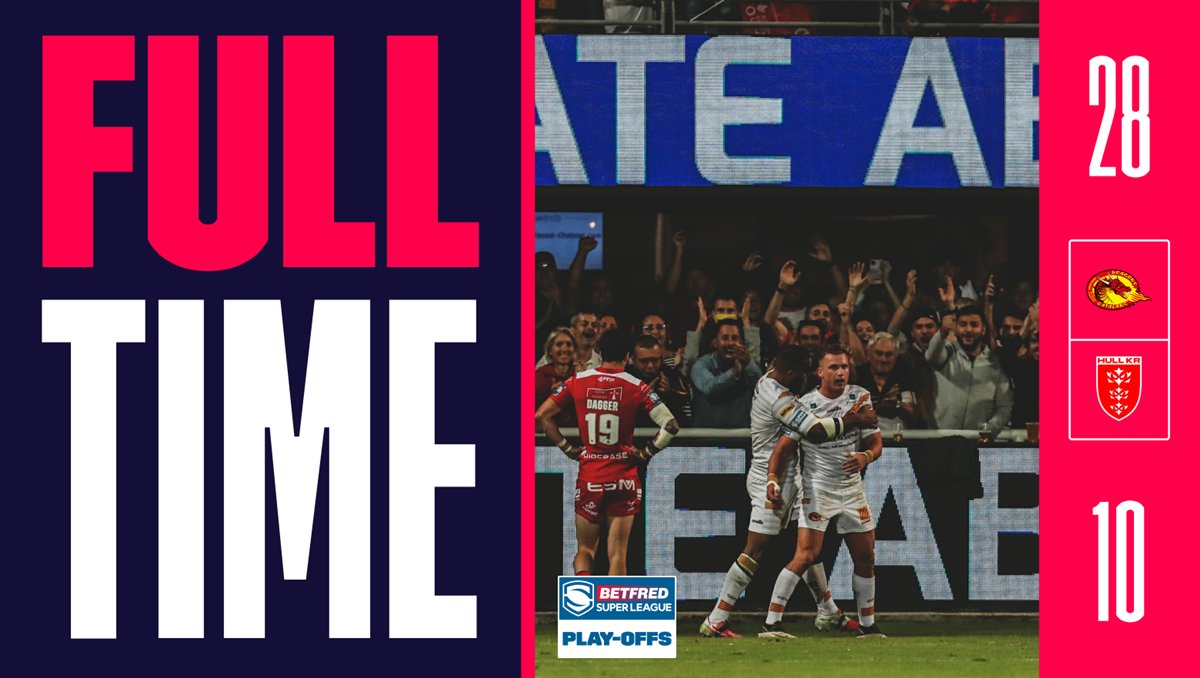 Hull KR, as we have seen so often this season, do not give up easily. They got their just rewards for some excellent attacking play down the left as Shaun Kenny-Dowall squeezed through the smallest of gaps to give Smith’s side hope before the break. Unfortunately, Jordan Abdull missed the conversion to leave the visitors eight points adrift as the hooter sounded.

KR had worked so hard to give themselves a chance in the second period, but that evaporated within the first minute as Steve McNamara’s men came out firing. A high kick was spilled by Will Dagger and Mourgue picked up the pieces to convert. That was a heartbreaking start to the second period by the visitors who could not afford to make those sort of errors against the League Leaders’ Shield winners. A missed conversion was the only saving grace they got.

Once again, they battled back without score, until Catalans Dragons showed their class with another try. A flowing move started by a Mike McKeenen offload saw Yaha in more space, and the winger crossed to put the game out of reach. It was a brave fight for Hull KR, but ultimately they were beaten by the better team. When Maloney kicked through for Joe Chan to finish, the 26-4 scoreline did not reflect KR’s battling performance.

Ryan Hall crossed for his 16th try of the campaign which made the scoreline more respectable but it is Catalans that deservedly progress to the Grand Final in Manchester next Saturday. Whoever they play, it should be a mouthwatering occasion.