Football
News
Russia were knocked out in the quarter-finals three years ago...
Simon Lillicrap
12:00, 07 May 2021

As the lowest-ranked team at the 2018 World Cup, even worse off according to FIFA than Saudi Arabia, expectations couldn’t have been much lower for Russia three years ago. They had no star names, a 38-year-old centre-back and a manager whose greatest achievement was winning the Polish league with Legia Warsaw in 2016. Russia, who had paid billions to host the tournament, were in danger of humiliating themselves in a catastrophic way.

However, from the lowest expectations come the best surprises. South Africa in 2010 are the only host nation in the history of the World Cup to fail to qualify from the group stages and Russia were determined to make sure they didn’t join them. In the opener against Saudi Arabia they set the tournament alight. Denis Chershev, one of only two players selected from outside the domestic league, scored two stunners in a 5-0 win, and all the pre-tournament dread was replaced with belief.

Mo Salah’s Egypt were easily swept aside in the second game as the hosts booked their place in the knockout stages with a 3-1 win, while the 3-0 defeat they suffered to group winners Uruguay wasn’t enough to dampen their spirits. 2010 world champions Spain lay in wait in the last 16, in what was without doubt, Russia’s biggest game as an independent nation.

When Sergio Ramos put the visitors ahead early on, it seemed the Russians' run was over. They had avoided embarrassment but would not create history. Then Artem Dzyuba equalised from the penalty spot and despite facing over 1000 Spanish passes and 22 shots, the hosts held on for penalties.

It was fitting that captain Igor Akinfeev would follow in the footsteps of Russia’s greatest player Lev Yashin, and save the decisive spot-kick from Iago Aspas. The hosts were into the last eight and put on one hell of a show against Croatia, again forcing a penalty shootout after a 2-2 draw. This time there would be no fairytale ending but thousands gathered to celebrate the achievements of their underdogs at the conclusion of the tournament. 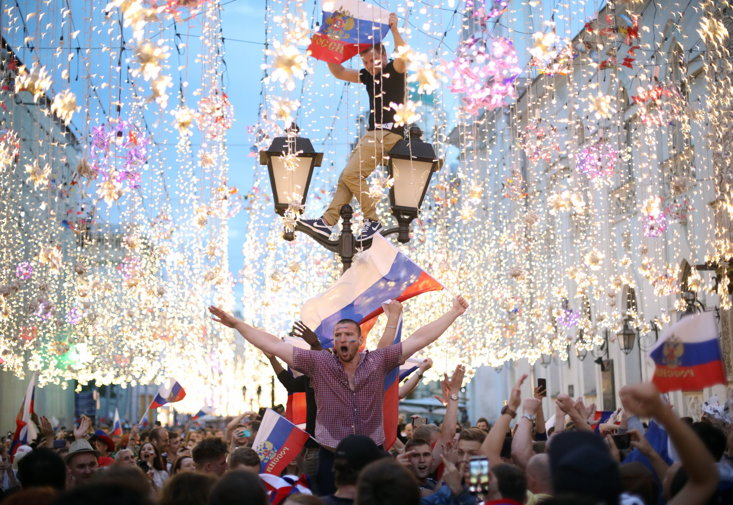 But what have Наши парни achieved since their World Cup heroics? Well, manager Stanislav Cherchesov is still in charge and has won 22 of his 52 games in charge. Their two Nations League efforts to gain promotion to League A have ended in disappointment after two separate collapses from top spot. Back-to-back defeats against Turkey and Serbia cost them dear late last year and they will remain in League B for now.

They qualified for this summer’s tournament having beaten the likes of Scotland, San Marino and Cyprus in their group eventually finishing as runners-up to the number one ranked side in the world, Belgium. Meanwhile in their three most recent matches, the World Cup qualifiers, they beat Malta and Slovenia before losing to Slovakia as they try to make their way to Qatar 2022.

The ageing squad hasn’t changed all that much. Dzyuba is now the captain of the side as Akinfeev has retired, but 37-year-old Yuri Zhirkov is still a prominent member of the squad. Monaco’s Aleksandr Golovin at 24 is one of only a handful of talents playing abroad, with the Moscow clubs accounting for a large proportion of the national team.

This isn’t a talented side in comparison to others at Euro 2020, but once again they will have home advantage - briefly. Two of their group games will be played in Russia, with their opening match against Belgium being played in Moscow, before they take on Finland in Saint Petersburg and Denmark in Copenhagen. They are incredibly unlikely to beat Belgium, but with the 16 of the 24 teams qualifying for the knockout stages, that should be their aim.

2018 was the peak of an ageing Russian side desperate to overachieve. Now they must look to the future and start to get more young players playing abroad to reach those heights once again.

Check out our other Group B previews: Denmark, Finland and Belgium