The story of Rocky Balboa has drawn influences from a number of real-life boxers but until recently, the true inspiration for Philadelphia’s most famous fictional character has been largely forgotten.

Sylvester Stallone, the writer and star of the Rocky series, admitted in a 2001 interview that Chuck Wepner, a heavyweight from New Jersey, was, in fact, the basis of The Italian Stallion.

Born in New York in 1939, Wepner’s introduction to fighting came on the mean streets of Bayonne, New Jersey, an area where Chuck learned quickly as a child that, to survive, you needed to be able to handle yourself.

As an adult he enlisted in the Marines and served in South Carolina, where he quickly made a name for himself on the Marines’ boxing team, impressing the people around him with an incredible ability to absorb and endure punishment.

Wepner was honourably discharged in 1959 and by 1964 had turned to professional prizefighting, quickly picking up the moniker ‘The Bayonne Bleeder’ due to the immense quantity of blood he would spill inside the ring - his scrap with former heavyweight champion Sonny Liston in 1970 is regarded as one of the bloodiest bouts in boxing history.

It was a fight with ‘The Greatest’ that made Sly Stallone sit up and take notice, when in 1975, Chuck Wepner was given a shot at the Muhammad Ali and the World Heavyweight Title in Cleveland, Ohio.

Boxing fans, press and promoters alike saw this fight as nothing more than a quick payday for Ali and most didn’t expect Wepner to go the distance. When asked by a reporter if he believed he’d survive to hear the bell himself, Chuck responded: "I've been a survivor my whole life... if I survived the Marines, I can survive Ali."

The disparity between the two fighters’ purses for the fight showed how big the distance between champion and underdog was. While it was a career-high payday for Wepner, he only earned $150,000 and an additional $25,000 for training, a stark contrast to Ali’s $1.5 million.

A tough challenger picked out of obscurity to face the Heavyweight Champion of the World, given little or no chance of causing an upset - is this story starting to sound eerily similar to Balboa’s epic first fight with Apollo Creed yet?

Like Stallone’s Balboa in the early stages of his fight career, Wepner was also working full time (a liquor salesman, not a mob leg-breaker like Rocky) prior to the Ali fight and would wake up, run, work, train, eat, sleep and repeat - this was his routine for years.

With the money he earned to prepare for Ali, Wepner was in a position for the first time in his career where he could train full-time with a real boxing coach - by the time of fight night on 23 March, Wepner was in the best shape of his career and was ready to surprise a lot of people. 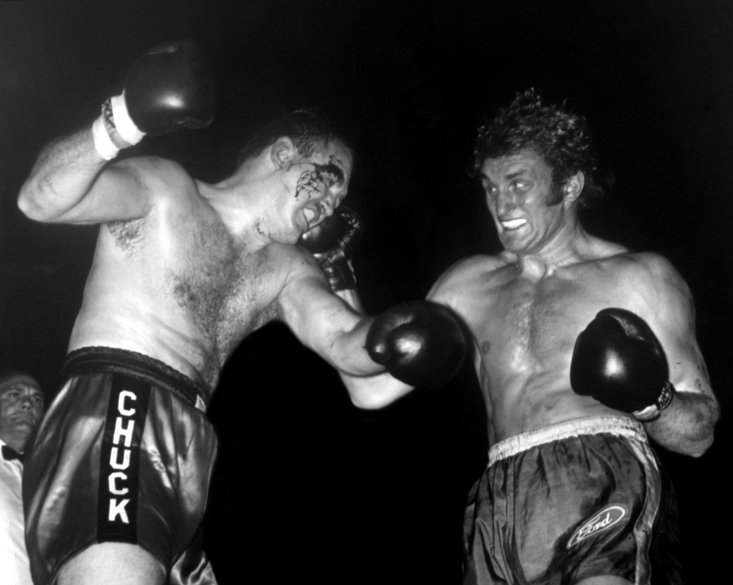 When the two finally met in the ring, following a James Brown rendition of the national anthem, Wepner was battered hopelessly around the ring and completely outclassed by the champion for large parts, and just like Balboa in the opening rounds of his fight with Creed, it didn’t look good for the underdog.

Then, out of nowhere, Ali went down in the 9th round. The man from Kentucky claimed it was merely a slip, Wepner to this day is adamant it was a clean knockdown.

Recalling the incident in a 2019 New York Times interview, Wepner said: “I headed back to my corner and said, ‘Start the car, we’re going to the bank, we’re millionaires - my manager said, ‘You better turn around because he’s getting up.’’

Ali continued where he left off, mercilessly beating the brave challenger.

To Ali and the onlooking crowd’s bewilderment, Wepner just wouldn’t go down despite the ensuing bloodbath. With 19 seconds left of the fight, the referee decided enough was enough and brought proceedings to a halt - Wepner lost by a considerable distance but he was the man of the hour, nobody expected the man from Bayonne to keep arguably the best fighter the world has ever seen from stopping him.

The fight with Ali might not have been as close as Balboa’s first fight with Creed, and there would be no rematch with Ali like Balboa did with Creed in Rocky II, but the similarities between Wepner and his on-screen equivalent are striking.

What Stallone saw between Ali and Wepner that night, and the film series he built around it, would go on to generate more than $1.7 billion at the worldwide box office. Unsurprisingly, Wepner felt a little cheated that something so successful was based on him and he hadn’t seen a penny from it.

In 2003, Wepner sued Stallone and an out of court settlement was agreed between the parties a few years later - finally ‘The Bleeder’ had some recognition for being ‘The Real Rocky.’

“I always loved the guy - he made me Rocky, but I needed him to acknowledge that I was the real Rocky,” Wepner later said.

More similarities between Wepner and Balboa would appear in later Rocky films. In 1976, Wepner fought wrestling icon Andre the Giant, losing when he was literally picked up and thrown from the ring. Many believe this encounter would be the inspiration behind Balboa’s infamous fight with fictional wrestler Thunderlips (played by Hulk Hogan) in Rocky III.

Wepner’s profile has risen massively in recent years with an ESPN documentary in 2011 called ‘The Real Rocky’, a film based on his life called ‘The Bleeder’ released in 2017 and most recently, in April 2019, a statue was erected in his honour in his hometown.

He might not be known by everyone, but at least we can finally give credit to the man that inspired an on-screen boxer who has entertained millions of people for decades. The story of Chuck Wepner is timeless.