Football
News
Pep Guardiola's side have agreed a deal with Borussia Dortmund to bring the Norwegian international to the Etihad
Conor Keane
16:57, 10 May 2022

It’s official, Norwegian scoring sensation Erling Haaland is going to be a Manchester City player from July after the club announced they had reached an agreement with Borussia Dortmund. The deal now just depends on terms being agreed with the player, but if reports are to be believed that is not going to be a problem.

The reigning Premier League champions have triggered the striker’s release clause (a bargain price of €60 million) from the German outfit and will tie him down to a contract that will run until 2027. Already this move will strike fear into Premier League defenders who will have a real job on their hands on keeping this man quiet.

While Pep Guardiola has a wealth of attacking options out wide and in midfield, he has now added a focal point after a year without a recognised forward in his ranks.

Haaland possesses all the attributes of a complete striker. He uses his towering frame to hold up the ball well, allowing him to bring others into play. The Norway international is blessed with pace too which allows him to drive the ball forward and take defenders on, and while he is renowned for his clinical finishing, the fact he can set up goals for his teammates will be why Guardiola has snapped him up. In 88 appearances for the Black and Yellows, he scored 85 times while registering 23 assists.

They tried hard to lure Tottenham Hotspur talisman Harry Kane away from north London last summer but Spurs held their nerve in knocking back City’s bids and approaches. Many were quick to criticise City and Guardiola for not having a Plan B in that window, but by not panic buying and going back to the drawing board has seemingly paid off and now they will have one of Europe’s biggest stars leading the line from next term.

With an out and out number nine returning into the fold at Manchester City, the first thought on everyone’s mind will be who misses out for the free-scoring forward in City’s starting lineup when the 2022-23 campaign kicks off in August. While Guardiola is renowned for being a tinkerer when it comes to team selection there are always the usual suspects who the Spaniard charges with spearheading his side’s attacking threat. 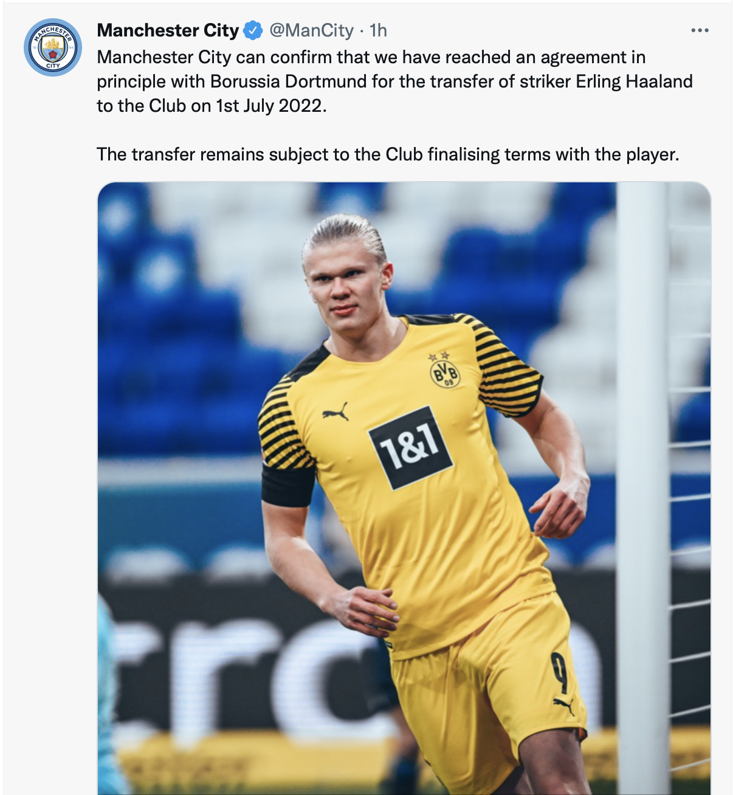 This year Guardiola has toiled with the use of a false nine in the middle of his front three and he has predominantly used Phil Foden in this role while sporadically utilising this season’s big-money signing Jack Grealish there too. Ferran Torres was also deployed through the middle before he suffered an injury which ruled him out until January and then he moved on to Barcelona.

On the wings, Guardiola has turned to Riyad Mahrez, Raheem Sterling and Grealish throughout the season and while there is regular rotation, not one of these players would be taken out for the sake of Haaland. After a recent resurgence, Gabriel Jesus has been a man in-form in front of goal but it is believed his time at Manchester City is coming to an end when this season concludes - with reports linking the Brazilian with a move to Arsenal.

This immediately becomes the obvious switch-up ahead of next term because Haaland will potentially come in as the only player suitable to play through the middle, at least in the traditional sense.

However, Guardiola is renowned for benching even his biggest stars and it’s fair to assume that Haaland will be no exception from this. The 21-year-old will be eager to play every game but that simply does not happen when you’re playing for Guardiola’s Manchester City, and with a concerning injury record this year it already seems unlikely that he could accomplish such a feat.

There is no questioning that this is a statement signing for the Cityzens to help tighten their grip on the Premier League playing field but also to bolster their chances of claiming that elusive first Champions League title and Haaland’s soon-to-be boss will already have a lineup in mind that will best suit the attributes of their new leading man.

If we are to assess how the current players have performed this season, the most dependable duo to play either side of Haaland would be Foden and Mahrez, which has all the makings of a powerful attacking trio which could torment defenders in the Premier League and in Europe. Mahrez has had his best goalscoring season since joining City in 2018, with a haul of 24. He has undoubtedly been the most consistent City player to play out wide and has earned the trust of his manager.

It is likely that Guardiola would reinforce his attack with a midfield of Kevin De Bruyne, Bernardo Silva (rotated with Ilkay Gundogan) all while protected by the tactical intellect of Rodri just in front of the defence.

Manchester City are already one of European football’s strongest teams but the addition of Haaland will take them to another level. With his astonishing record of averaging a goal every 87 minutes in the Bundesliga combined with the chances that City can conjure out of nothing, it is hard to see them squandering many if he’s the one presented with them.