Football
News
It is Nunez's excellent all-round game that will have piqued the interest of Liverpool and particularly Jurgen Klopp
Conor Keane
12:02, 09 Jun 2022

This summer transfer window has already delivered Erling Haaland to the Premier League with Manchester City, but another star striker could be set to follow him with Liverpool and Manchester United chasing Benfica’s Darwin Nunez.

The Uruguayan has made quite an impression across the continent over the past 12 months, having enjoyed an outstanding breakthrough year both domestically and in the Champions League. He has established himself as one of the hottest prospects in the game with his fine performances and is now set for a big summer move which, at this moment in time looks destined to send him to Anfield.

Liverpool are going through a changing of the guard in this transfer window. They have just announced that sporadic cult hero Divock Origi has left the club on a free transfer and reports suggest his next destination will be Serie A. They are also set to offload midfielders Takumi Minamino and Alex Oxlade-Chamberlain, who have both found game time hard to come by in recent years. Then, of course, there is the situation involving key attacker Sadio Mane, who seeks a new challenge with Bayern Munich, with two bids already being knocked back by the Reds for the Senegalese winger.

With the likelihood of at least two forwards leaving Anfield in the same window, the club have had to deliberate over a suitable replacement to bolster their attacking ranks. And given that Liverpool are willing to smash their transfer record for Nunez’s services, these potential player departures could be utilised to raise funds for the lucrative move that will surpass the £75 million paid for Virgil van Dijk four years ago. Liverpool are believed to be structuring a deal worth €80m with a further €20m in add-ons.

Nunez scored 34 goals in 41 goals across all competitions for the Portuguese outfit in 2021-22, but while his goal-scoring prowess has put potential suitors on high alert, it is his all-round game that will have piqued the interest of Liverpool and particularly Jurgen Klopp. The attacker does not shy away from helping his teammates with the defensive work, which is the foundation of the Reds’ success under the German coach, and with a transitional period approaching, a player like Nunez fits the mould perfectly for the next stage of Liverpool’s evolution. 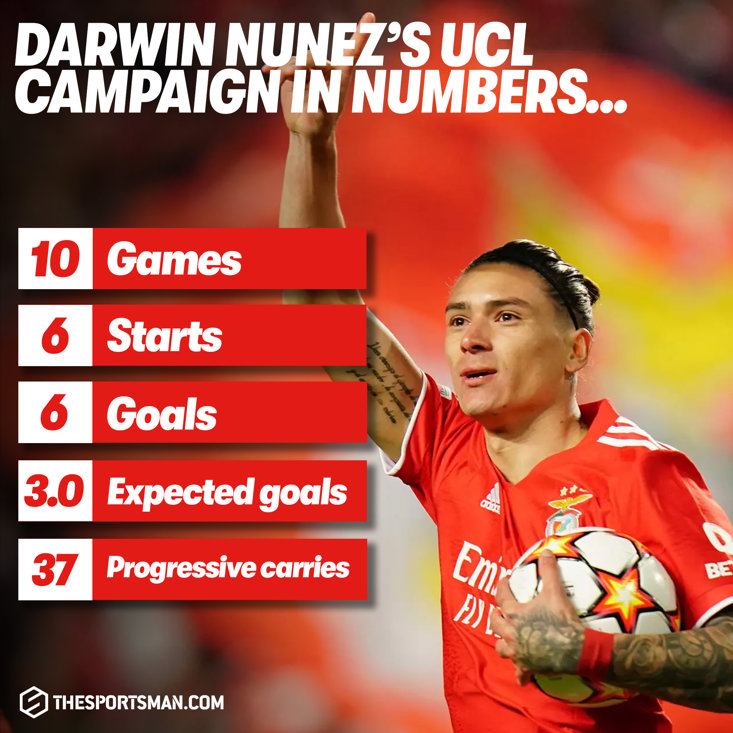 It is clear that Klopp sees the 22-year-old as a key part of his plans moving forward and there is no doubt the player’s performances against his side in the Champions League last term have definitely brought this scenario to fruition. Following their European meeting in which Nunez scored, the German coach was complimentary about the player - and not just for his footballing ability.

“He’s an extremely good looking boy, eh? And a decent player as well. He is really good.

“Physically strong, quick, was calm when he finished his goal off. If he stays healthy, he has a big career ahead of him.”

Klopp is renowned for his work in developing players, so he could be instrumental in helping Nunez unlock his potential. Should this deal get over the line, Liverpool will have not only secured the services of a brilliant player, but one who has years of his career left ahead of him and could be the figurehead for the second chapter of Klopp’s era on Merseyside.

If Nunez makes the switch, he has a lot to live up to given the record of Liverpool’s previous Uruguayan star, Luis Suarez. But taking into account how quickly the forward has adapted to senior football after last year’s stunning breakout campaign, he will be expected to at least match and perhaps even eclipse Suarez’s excellence on Merseyside.