Kylian Mbappe is arguably the finest footballer on the planet at this current moment in time and certainly one of the quickest. With five goals in four games so far, the 23-year-old is on course to win the Golden Boot, and it wouldn’t be a surprise to see him lift a second World Cup on the 18th December.

The next challenge for the young superstar is England in the quarter-finals. But how can Gareth Southgate and his Three Lions stop him? We’ve looked at the World Cup teams that have attempted to deal with him so far, and what England can learn from their successes and failures.

Mbappe's return: One goal, one assist.

Australia stunned current holders France by taking an early lead, but Didier Deschamps' men blew them away with four unanswered goals, and Mbappe was on fire. The Socceroos played a fairly deep 4-1-4-1 system in order to stifle space, but they were battered by a relentless onslaught.

Interestingly, Mbappe chose to play more centrally during this game and in doing so he dragged Nathaniel Atkinson inside, which created more space for Theo Hernandez to overlap. This was a key feature in the comeback, so England should be wary when entrusting Kyle Walker to deal with the PSG forward.

He found half a yard of space to whip a cross in for Olivier Giroud to head home the fourth, while his own goal came as he floated in between the centre-back duo and glanced a header in. It’s not the usual goal we expect from Mbappe, but it showed how threatening he can be from any scenario. He also missed two big chances in this match so John Stones and Harry Maguire will have to be on high alert at all times.

Could Denmark serve as a warning to Southgate not to go to a back three? Perhaps. The Danes were fully expected to test France having beaten them twice in the Nations League, but they were blown away by Mbappe. On one breakaway, his ridiculous pace looked like it had taken him through on goal, before he was brought down by Andreas Christensen who narrowly avoided a straight red card.

Victor Nelsson was left in a spin when he got too close to him on the halfway line and Mbappe could have scored three or four. In the end he had to settle for two. His opener saw Theo Hernandez again play a crucial role as he played a quick one-two in the box and Mbappe applied the finish.

His second came from nowhere but proved the size of the task England have ahead of them. He timed his run perfectly and snuck in at the back post to finish, securing a vital three points for France.

Even if he’s not running at you with the ball, he is still a major danger. Against Denmark he played far wider and ran inside, isolating the right wing-back. The issue was the Danes couldn’t pick him up when he made those runs, leading to Mbappe missing two other big chances as he registered an xG of 1.04. The back three could work, but it didn’t for Denmark. 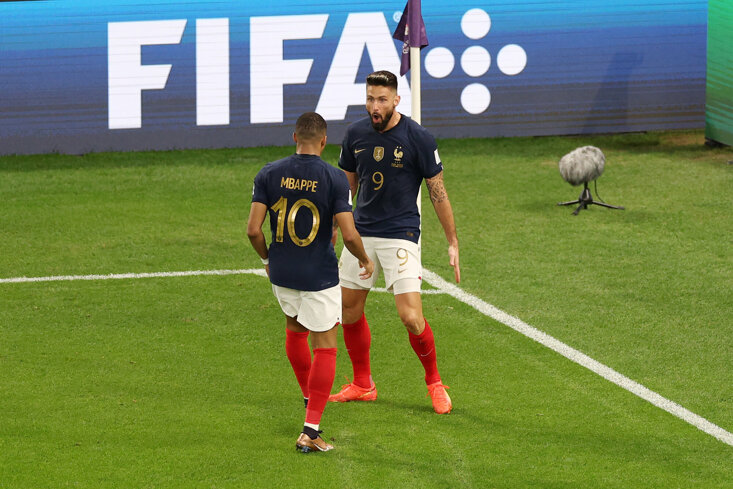 Mbappe's return: Nothing from 27 minutes

A slight outlier here as Mbappe started on the bench and France put out a second string side, but Tunisia did manage to keep him quite for nearly half an hour as they secured a famous win. He still managed two shots on target and three successful dribbles however, the finest one coming as he skinned Yassine Meriah twice on the touchline before firing at goal from a tight angle.

Given Tunisia had a one goal lead and the result didn’t matter for France, it's difficult to judge Mbappe from this performance. Tunisia’s back five were able to sit in deep though and defend, so perhaps Southgate can take notes from that.

Right back Matty Cash actually played pretty well against Mbappe, but the Frenchman still ended the night with two goals and one assist. His pass to Giroud for the opener came from slightly deeper, but caught the Poland back line slacking. England’s defensive unit will have to have their offside line perfected to avoid a scenario like this repeating itself.

Mbappe’s first goal came from some disgraceful Polish defending. Leaving the best player in the world in acres of space was unthinkable, and he was able to take three touches in the box, before lining up his shot and firing past Wojciech Szczesny. The Three Lions have to be more aggressive with their closing down.

His second goal however, was unstoppable. He received the ball in the box and under pressure from two players, took a touch onto his right and whipped it into the top corner. Sometimes, you just have to hold your hands up.

So having scored four goals in two games against a back four, and two goals in 117 minutes against a back five, it seems like the back five may be the better option. However, in changing the system would England lose more than they gain? They may be able to control Mbappe, but could lose a man in midfield, where Antoine Griezmann could flourish.

Whatever system Southgate chooses, England will need to be aggressive when he gets the ball. Jordan Henderson and Kyle Walker need to have the game of their lives and hopefully England’s attack can cause a few problems of their own. It’s a big ask, and Mbappe has scored in every game he has started so far. Stop him and England go some way to winning this quarter-final.