Gerard Houllier took a side of ageing stars and turned Liverpool into challengers once more, bringing silverware to Anfield while securing two top-three finishes in the Premier League, not to mention overseeing a complete transformation of the way the club was run.

It was while studying for a degree in English at Lille University that a young Houllier would attend Alsop Comprehensive in Liverpool and so began his love affair with the city and the football club which would last for over three decades.

On September 16, 1969 the 22-year-old Frenchman enjoyed his first taste of that famous Anfield atmosphere as the Reds destroyed Dundalk 10-0 in the Inter City Fairs Cup – a record victory at the time.

But as well as being one of the most convincing wins in the Reds’ history it was also a moment that would have a lasting effect on the club many years down the line as the young man who had ambitions of becoming a teacher would eventually return to Anfield as Liverpool manager.

Although a decent player in his youth Houllier had no real desire to become a footballer, instead choosing to pursue a career in teaching but when his father was taken ill it would create a chain of events which would eventually see him become one of the most respected coaches in the game.

Dropping out of University Houllier eventually took a role as Deputy Headmaster of the École Normale d'Arras to make ends meet before returning to football as player-manager of provincial club Le Touquet aged just 26.

He then moved to Arras as youth coach, and Nœux-les-Mines as head coach where he won two consecutive promotions into the second division before moving to Lens in 1982. He would lead Lens to promotion and qualification for the UEFA Cup before moving to Paris Saint-Germain in 1985, where he won the French title the following year.

His meteoric rise through the footballing ranks then saw him take the role of assistant coach to Michel Platini at the French national team in 1988 before becoming boss of Les Bleus himself in 1992; though his stint in charge would always be blighted by a disastrous qualifying campaign for the 1994 World Cup.

But the failure did little to ruin his reputation in the game and on July 16th 1998 Houllier was appointed joint team manager of Liverpool, together with Roy Evans, a move which was not universally popular, particularly with Evans; but one which would eventually result in a change of fortunes for both club and manager.

Cathal OL 🇮🇪🔴
@IrishRED05
I've been thinking about this banner a lot lately & I'm glad I've seen a few mention it. Where the hell is Gerard Houllier? Won us a Treble that included a European trophy. His last 2 seasons were slightly forgettable but 00/01 was incredible. Respect the man 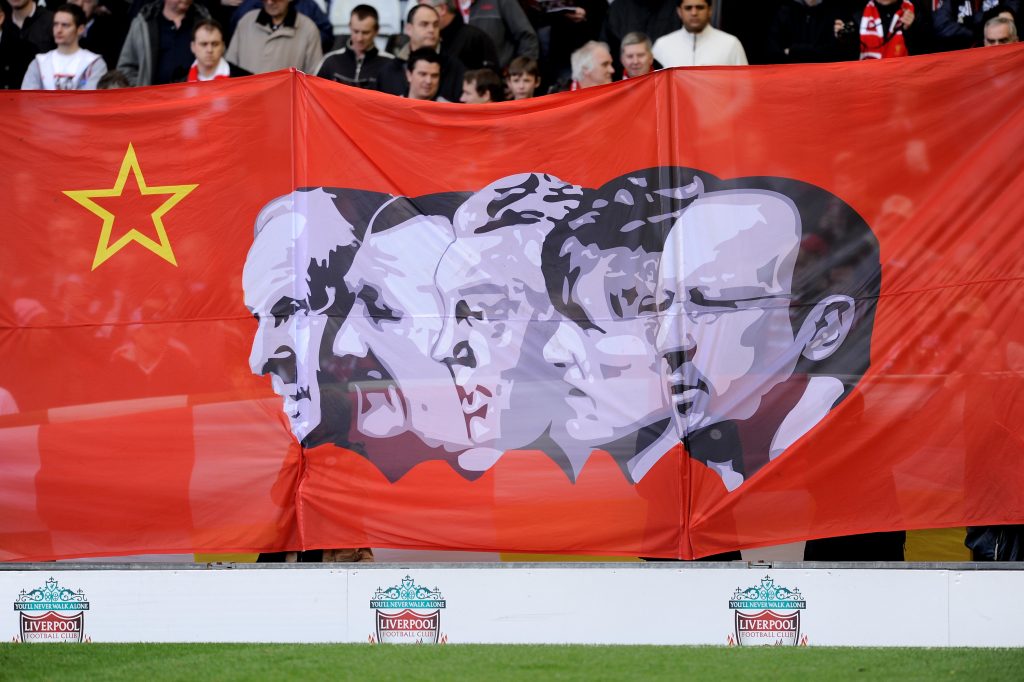 Following Evans’ resignation that November, Houllier took sole charge as he embarked on what he described as a five-year program to rebuild the team and restore discipline to a squad as well as introducing a continental approach both tactically and in terms of personnel.

As well as failing to win any major honours since 1995 Houllier also had his work cut out with a group of players who had been dubbed “The Spice Boys” just a couple of years earlier as he overhauled everything from training, diet and day-to-day lifestyle.

A number of big names soon departed including; Paul Ince, David James, Jason McAteer and Steve McManaman, while Rob Jones, Tony Warner and Steve Harkness all departed the club in the summer with Sami Hyypiä, Dietmar Hamann, Emile Heskey and Gary McAllister all moving in the opposite direction.

His efforts had the desired effect and in the 2000/2001 season Liverpool completed a cup treble when they lifted the League Cup, FA Cup and UEFA Cup all in the same campaign, not to mention a third-place finish in the Premier League.

However, with the club looking like they might eventually mount a challenge for the domestic title for the first time since 1990, Houllier fell ill at half-time in Liverpool's Premier League match with Leeds United and was rushed to hospital for an emergency operation after suffering a dissected aorta.

A long period of convalescence would mean he was absent from the dugout for some five months as Liverpool eventually finished runners-up some seven points behind eventual champions Arsenal with assistant manager Phil Thompson at the helm for much of the campaign.

After such heady heights things would never be the same for Houllier at Anfield. The cup treble and a second-place finish were followed by a fifth-place finish in the Premier League in 2003 which meant failure to qualify for the Champions League.

Houllier eventually left Liverpool by mutual consent in May 2004 amid accusations of negative, one-dimensional tactics, unattractive football, and a poor youth policy, not to mention questionable signings like El Hadji Diouf, Salif Diao and Bruno Cheyrou.

But it could be argued that his revolutionary approach changed the entire make-up of the club from top to bottom, just as Arsene Wenger had at Arsenal several years before; while also paving the way for the club to become champions of Europe for the fifth time just 12 months later under his replacement Rafa Benitez.