Football
News
The former Man City boss has longed to take his country to a major finals
Kris Voakes
07:50, 11 Jun 2021

When Roberto Mancini really wants a job, he will stop at nothing to make sure it’s well known. And he really, really wanted to take Italy to the European Championship… in 2016.

“Cesare Prandelli is there right now, so we’ll have to see what happens in the future, but the national team certainly doesn’t come second to anything. It can only be a priority,” said ‘Mancio’ in late 2013 after Prandelli had announced that the 2014 World Cup would be his last tournament as Italy’s head coach.

Mancini was fresh out of work after being sacked by Manchester City following their FA Cup final defeat to Wigan Athletic just 12 months on from leading the Cityzens to their first league title in 44 years. He looked destined to be in with a very good shout.

But after the Azzurri’s second consecutive group stage exit at the World Cup, Antonio Conte became available following his departure from Juventus, and it was to be the former Bianconeri midfielder who would be handed the commissario tecnico role in charge of the national side for the following Euros.

Wind forward to May 2018, and after the abject failure of Gian Piero Ventura to lead Italy to the World Cup in Russia, it was finally Mancini’s time. Having terminated his contract at Zenit St Petersburg after a year in the job, the former Sampdoria and Lazio attacker was finally in a position to take his dream role. 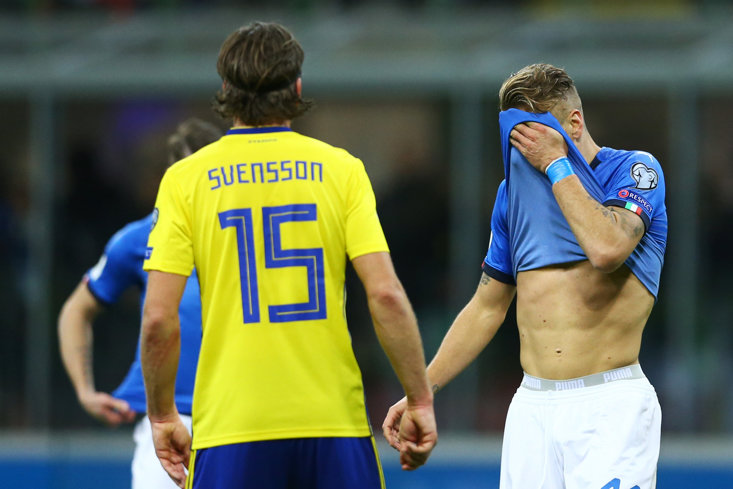 In many ways it was the perfect time to be handed the gig. Expectations were at rock bottom following the Ventura experiment, with a changing of the guard being necessary. The infamous shot of one of Ventura’s assistants calling on Roma veteran Daniele De Rossi rather than attacking starlet Lorenzo Insigne with the Azzurri in need of a goal in their World Cup play-off decider with Sweden said much about the old regime’s willingness to change.

And what Mancini has managed as national boss is to breathe new life into the setup. While Giorgio Chiellini and Leonardo Bonucci, with their 209 caps between them, remain at the bedrock in defence, Italy find themselves halfway down the pack when it comes to their squad’s average age. The likes of Insigne and Ciro Immobile are now among their ‘veterans’ at 30 and 31 respectively, while Inter’s exciting Nicolo Barella and Juve’s Federico Chiesa – son of 22-cap former international Enrico – have added a new vibrancy to the side.

Even the loss of legendary 176-cap goalkeeper Gianluigi Buffon has not left them short of quality. In Gianluigi Donnarumma, the Azzurri have probably the youngest veteran in world football, with 251 senior club appearances and 26 national team caps to his name at just 22 following his emergence at the age of 16 with AC Milan.

“I like the atmosphere that’s developed within the team and what the younger players have managed to achieve in such a short space of time, thanks in part to the help they’ve received from the more experienced players in the group,” Mancini told UEFA.com of his final 26. “Sometimes players need more time, but these youngsters are quick to learn and have improved a lot, and because they're so young, they can still improve further.”

They will get their first chance to learn on Friday night when they face Turkey at the Stadio Olimpico. The last time Italy were there on the opening night of a major tournament, back at the 1990 World Cup, the atmosphere had a crushing element to it. The expectation was almost too palpable, with Mancini watching on from the stands as an unused squad member. It took the entrance of the unlikely super-sub Salvatore Schillaci with 15 minutes remaining for them to finally break down Austria and chalk up an opening-night win.

This time around the expectation shouldn’t have quite the same damaging effect, but at least it will be greater than it was three years ago when Mancini took over. Some believed it to be a footballing travesty that this grand footballing nation was missing from Russia in 2018, but Mancio has got them back where they belong. Now there is a renewed belief that they can go deep, even if this is a first step back on the road to redemption.

Friday night at the Olimpico is the return of Italy on the biggest of stages, and nobody has wanted this moment more than Roberto Mancini.