At major tournaments, England’s goalkeeping situation in the last twenty years has never looked convincing. The Golden Generation lacked a goalkeeper with the same quality as the outfield stars with David James and Paul Robinson overseeing two consecutive penalty shootout disappointments against Portugal, while Scott Carson’s howler in the Wembley rain meant England didn’t even qualify for Euro 2008.

Rob Green saw Clint Dempsey’s strike squirm under him in 2010, which ultimately resulted in him being dropped and Fabio Capello reverted back to James, and then we had the rise and dramatic fall of Joe Hart. Euro 2016 effectively ended his top flight career when he had the opportunity to be England’s long-term number one.

Then came Jordan Pickford. Arguably, in this social media age, the most criticised goalkeeper of the lot. Heading into the 2018 World Cup, Gareth Southgate was lacking a clear number one, but Pickford suited his playing style down to the ground. Having worked hard on loan at Darlington, Alfreton Town, Bradford City and more before eventually being given his opportunity at Sunderland, his story is one of complete belief and dedication.

For his country he has risen through the ranks, playing in every age group since the age of 15 and his work with Southgate for the under 21s made him his go-to man in 2018, despite only having three full international caps to his name. We all know what happened next.

Against Colombia, he became the first goalkeeper to save a penalty in a shootout since David Seaman at Euro ‘96 as the Three Lions won their first ever World Cup penalty shootout. That save alone wrote Pickford’s name into English history, but this time around, the Three Lions are looking to end that 55 year wait for an international trophy. 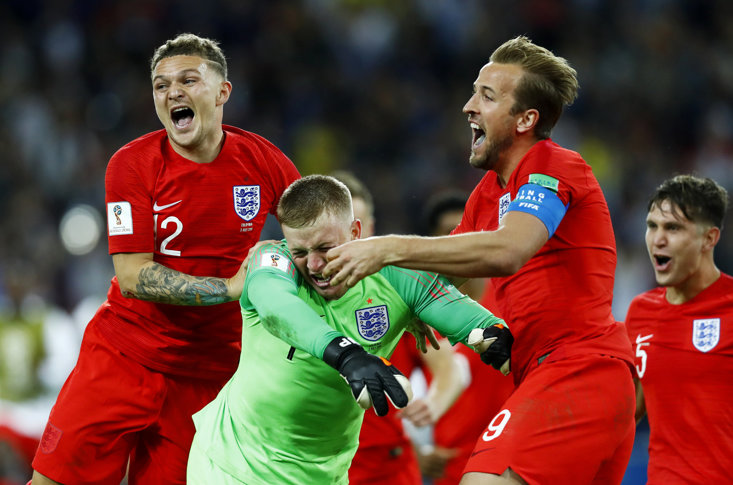 The Everton keeper has never put a foot wrong for his country and even when his club form has dipped, he has always retained the faith of the England manager. It’s easy to forget he was dropped by his club for a couple of games earlier in the season, but has bounced back from that disappointment to become one of the Premier League’s very best in 2021.

For club and country, the 27-year-old has now kept 12 clean sheets in his last 18 games, and he is the only goalkeeper yet to concede at Euro 2020. His two smart saves from Timo Werner and Kai Havertz kept the Three Lions in the tie against Germany while his distribution is the best we have ever seen from an England goalkeeper.

The mistakes he was making for his club earlier in the season have been eradicated in 2021 and a lot of that has been attributed to the work he has done with a sports psychologist. Paul Robinson is a man who knows the pressure that comes with being England’s number one at a major tournament, having played at the 2006 World Cup and believes Pickford has matured hugely in the past 12 months.

“He’s done extremely well,” Robinson tells The Sportsman. “I know that he has been working with a psychologist that keeps his concentration, and you can see that he used to get sucked into situations that he shouldn’t get sucked into and I think you can see he has matured, he has grown.

Calmness is everything for a goalkeeper, and now England finally seem to have a safe pair of hands between the sticks who, along with the defence in front of him, are carrying their country deep into this competition.

"For me it is very good and it is really nice," Pickford said when asked about keeping four clean sheets from four games at Euro 2020. “But it is not just me, it is a full XI and everyone is working really hard to keep those clean sheets, in tournament football they are key.”

Amid all the clamour for attacking football, England’s defence has been the best in the competition to date. One more clean sheet against Ukraine in Rome would be ideal and the criticism of Pickford seems to have stopped, but let’s give England’s number one a little bit more credit than that - he’s the best we’ve had since Seaman.