Manchester City fans are feeling hard done by. Again. UEFA’s decision to ban them from all European competitions for two seasons and fine them €30m show just how seriously they are taking breaches of their Financial Fair Play regulations and sets a firm precedent for other big clubs in Europe.

But City’s resentment of UEFA goes back a lot further than the last week. In fact, the Cityzens have a long-standing feud with the governing body, which began back in 2011 when City were taking their first tentative steps in the world of European football. Playing in the Europa League against Porto, forward Mario Balotelli was racially abused by the opposition fans.

The punishment inflicted by UEFA? A mere €20k made worse given the fact City themselves were fined €30k for coming out for the second half 30 seconds late in a game just one month later. Racism has never been properly tackled by the footballing authorities but for City fans, this was the most blatant example of injustice.

In 2014, City were made an example of by UEFA as the new FFP regulations came into effect. They were fined a huge £49m, or the price of one Raheem Sterling and hit with transfer sanctions and squad restrictions for the following season.

But the real frustration and the boos over the Champions League anthem began after City fans who had already booked their ticket to Moscow were not allowed into the stadium. We caught up with Onefootball journalist and City supporter Dan Burke to get the fans' view on this ongoing saga:

“I think there have definitely been a few incidents in the past which have sewn seeds of resentment towards UEFA among City fans,” he told The Sportsman.

“City were famously fined more for being a few seconds late getting back onto the pitch for the second half of a Europa League game a few years ago than Porto were when their fans racially abused Mario Balotelli.

“Then there was the CSKA Moscow debacle in 2014, when the game in Moscow was supposed to be played behind closed doors after CSKA's fans were found guilty of racism, only for hundreds of home fans to be let in while City fans who had already booked flights and accommodation were left out of pocket.

“I don't personally think FFP was brought in purely to target City but I do believe it was created to protect the interests of a small group of wealthy clubs and I can understand why almost all City fans don't trust UEFA.” 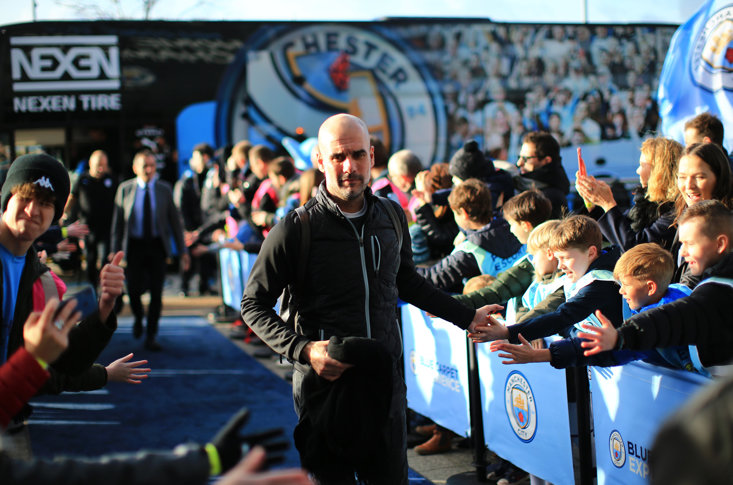 City’s relationship with the governing body now looks damaged beyond repair and the club can only appeal the decision with the hope of getting it overturned. Reports have varied as to what the clubs punishment will be in the Premier League, with some suggesting the club could face a points deduction, while others have even suggested they could be stripped of their titles or banished from the top flight.

It would certainly be a shock if the punishment was that severe, however, without the prospect of Champions League football, the club could face a turbulent few years which could see Pep Guardiola leave. His current deal runs until 2021, but it's often been mooted that the Spaniard would leave at the end of the season, having never managed a team for longer than four seasons, and, now, without Champions League football for two years.

Guardiola poured cold water on any speculation this would be his last at the Etihad, telling Sky Sports on Monday: "Look, whatever league we are in, I will still be here. Even if they put us in League Two I will still be here this is a time for sticking together."

Encouraging words for any City to hear, but there'll likely be a few twists and turns before the end of the season concerning Guardiola's future so it might be prudent to keep the champagne on ice for now.

“I can't imagine the reports about the club being retrospectively stripped of their titles or relegated to League Two have any foundation to them personally, but you never know,” Burke added. “If the two-year Champions League ban is upheld I think there is a strong possibility City will lose some of the best players and there's also very little chance of Guardiola signing a new contract.

“They may also have trouble attracting the players they need for the planned squad rebuild this summer. It will be interesting to see if the Premier League decides to take action. If they were to issue a points deduction this season it wouldn't matter too much because City can't win the title anyway, but deducting points for next season or even retrospectively would be far from ideal.”

Whatever happens next for Man City, one thing is for sure...UEFA are the enemy and the Champions League anthem will be met with a whole host of boos when Real Madrid come to town in mid-March.