Football
News
How Much Do Lionel Messi And The World's Biggest Sports Stars Earn Per Minute Of Action?
Simon Lillicrap
17:15, 13 Jun 2019

Forbes has released its list of the top 100 highest paid athletes in the world over the past twelve months with Lionel Messi topping the list ahead of Cristiano Ronaldo and Neymar. But which athletes in the top ten have worked the hardest over the past twelve months to make it onto this list? We delve deep into the numbers to work out how many competitive minutes they have played for their money.

Wage per competitive minute: $20,043 per minute

The greatest player in the history of the most popular sport in the world is the highest paid player in sports. Breaking down his earnings, he earned $92m dollars due to his wages and bonuses and then an extra $35m via endorsements bringing his total to $127m.

Obviously, training is a big part of being an athlete but if we can break that down into competitive minutes played and work out how much Messi earned per minute of football in 2018/19. In total he played 4023 mins for Barcelona and 495 for Argentina over the course of the season, including the World Cup in 2018.

Wage per competitive minute: $10,215 per minute

Cristiano Ronaldo’s salary ($65m) is dwarfed by Messi’s but he does make up for that in sponsorship deals. The Portuguese superstar makes a huge $44m in endorsement deals - the third highest in the top ten.

In total, for his new side Juventus he played 3,646 minutes and for Portugal, including his Nations League success he turned out for 661 minutes. That totalled 4307 minutes, slightly less than his Argentine counterpart. If we head back to the calculator that equates to $10,215 per minute or £8018 pm.

Wage per competitive minute: $22,935 per minute

At PSG, Neymar is the second highest paid footballer in the world but is surpassed due to Ronaldo’s global appeal. He earns a tidy $75m a year from the club but given his injury issues he has not featured as regularly this season.

For PSG he played a total of 2351 minutes across all competitions but he has played a large role for Brazil, totalling 919 minutes. That means Neymar has played football for 3270 minutes this season earning him $22,935 per minute. Gargantuan.

One of the finest boxers on the planet, Canelo Alverez has had three fights over the past twelve months and won them all. His win over Gennadiy Golovkin in September was followed up with a third round success over Rocky Fielding in December. Last time out he went the distance with Daniel Jacobs but won unanimously.

In total, he fought for a combined time 80 minutes and 22 seconds and with his whopping earnings of $92m that gives him a wage per minute of $1.15 milion. WOW. Of course, boxing an incredibly arduous and dangerous sport but that sort of money shows just how financially rewarding it can be if you are the very top.

Wage per competitive minute: $510 per minute.

Over the past 12 months Federer has played 69 singles matches, but failed to win a major. Despite that fact he has scooped a huge $93.4m in total yet just $7.4m of that comes in salary and bonus payments. That means $86m of his earning comes in sponsorship deals from brands such as Wilson, Credit Suisse and Rolex, way higher than any other athlete on this list.

Unfortunately, not all of Federer’s games have their official gameplay timings published online but if we use the average of three and a half hours per match, we can estimate his earnings per minute. The Swiss ace has played for around 14,490 minutes over the past year giving him an average earning of $510 per minute - pennies when you compare to others on the list. 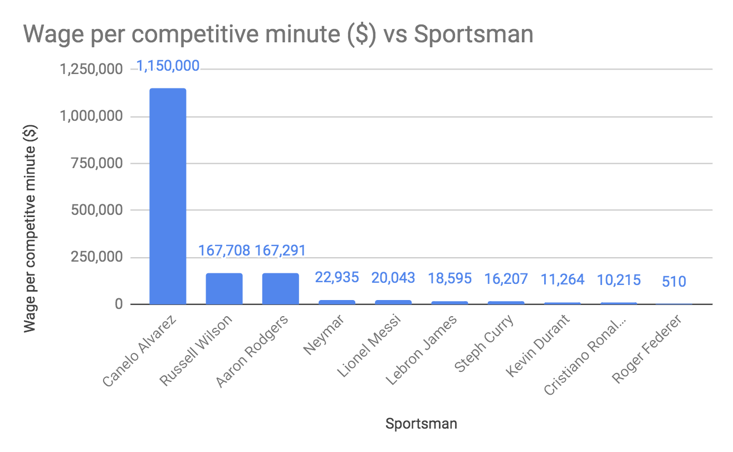 This graph shows just how far ahead Canelo is

The Seattle Seahawks Quarterback is on a big salary as one of the top players in the NFL. In the 2018 season he played 16 games at 60 minutes each (although they last a lot longer) giving him a total gametime of 960 minutes. However, as American Football is split into attack v defence, he is usually only on the pitch for around half a game.

This means his total playtime was around 480 minutes giving him an estimated earning of $167,708 per minute. Phenomenal earnings.

In a similar ballpark here, Aaron Rodgers of the Green Bay Packers is earning serious dough at the age of 35. His $80.3m salary means that he earns around $167,291 per playing minute, falling just short of Russell Wilson.

The greatest basketball player on the planet is quite rightly fairly high up this list. He earns a lower salary than many in the top ten at $36m but makes up for that in his sponsorship earnings given his appeal in the United States.

He played for a total of 1936 minutes over the course of the season over 55 games, playing on average 35 mins and 12 seconds every appearance. That works out at a tasty $18,595 per minute played, more than Cristiano Ronaldo, but less than Lionel Messi.

Another NBA player that features in the top ten of the Forbes list is Steph Curry. His salary is slightly higher than LeBron James’ at $37.8m but he does not pull in quite the same amount in endorsement deals giving him total earnings of $79.8m.

The Golden State Warriors Point Guard played a whopping 69 games in 2018-19, averaging just over 33 minutes per game which gives him a total playing time of 2332.2 minutes giving him a wage of $16,207 per minute.

One more NBA player rounds off this list. Kevin Durant may have suffered a devastating injury that brought an end to his season but the Golden State Warriors man played a remarkable 78 games over the course of the campaign. That lead to a total of 2698.8 minutes played and a wage per minute of $11,264. 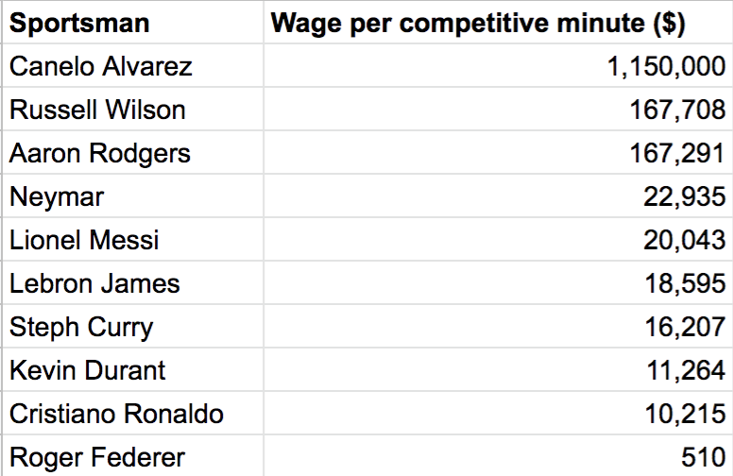