Football
News
How Much Money Has Neymar Earned At PSG Whilst Out Injured?
Simon Lillicrap
11:55, 01 Aug 2019

Neymar is football’s overpriced villain. He is so dislikeable that it had become easy to forget his outstanding footballing ability that Paris Saint Germain paid £199.8m for back in 2017. That price tag made him the most expensive player in history and he has a hefty wage packet to go with that title.

In fact, the Brazilian forward earns a cool £537,000 a week to play for the French giants (Evening Standard), which perhaps unsurprisingly makes him one of the highest-paid athletes on the planet. The issue that the Parisians have had with their star man is that they just cannot appear to keep him fit.

He has been plagued with injuries ever since his arrival and over the past two seasons, issues after Christmas have caused him to miss key Champions League knockout games, something which is unacceptable as he was brought to the French capital to win Europe’s most prestigious competition.

These injuries have not just affected the French champions on the pitch. It would not be an exaggeration to say that Neymar has been a financial drain on the club since his arrival, especially when he has been out injured and not contributing on the pitch.

But it is the amount he has earned whilst out injured that we are most interested in. Incredibly, the 27-year-old has earned £21,880,175 whilst on the injury table; a figure that means that 39.2% of Neymar's earnings at PSG during his two years at the club have been procured whilst injured.

That is a remarkable percentage which only increases when you look at other factors. In July, when he was meant to report back for pre-season he went absent without leave, but was surprisingly not fined for his absence. This meant another £537k in his back pocket for an extra week’s holiday as PSG bent over backwards to keep their main man happy.

His disciplinary record has also been poor whilst at the club, but his bank balance has remained healthy despite being suspended. In fact, he has scooped £2,991,858 in total from the games he's been suspended for - crazy money even in the modern world of football.

Neymar has the ability to become the best player in the world but - at 27 years old - he is running out of time and frustratingly for PSG, not getting enough time on the pitch to make an impact in the key moments of the season.

This year, we must see more of Neymar on the pitch and he must have an injury-free campaign this time around otherwise this could go down as one of the worst football transfers in history. 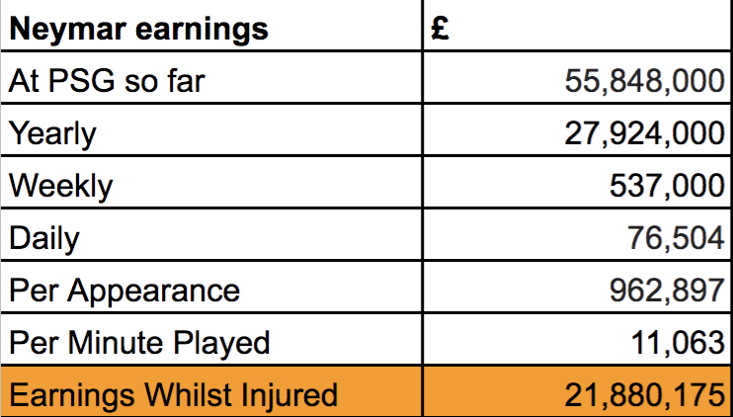