Neil Robertson admitted a pep talk from his son Alexander was the inspiration for his sensational Tour Championship comeback success.

The 40-year-old Australian staged a miraculous recovery against John Higgins at the Venue Cymru in Llandudno – winning the last six frames for a stunning 10-9 victory.

While events on the night left Higgins shattered after being on the wrong end of one of the game’s greatest fightbacks, Robertson was on cloud nine.

A fourth major title of the campaign underlines his status as player of the season, and sends him to the Crucible chasing a second world title feeling almost invincible.

Robertson said: “My son Alexander was texting me at the interval when I was 8-4 behind saying ‘Come on, dad, you can do this’, with all those strong-arm emojis they use.

“He was saying ‘great break of 91 for 8-4 there, that was awesome’ and telling me I could come back and that he believed in me, like I always believe in him. Amazing from an 11-year-old kid, really.

“He is a big part of why I have to stick in there at times like that, because I have to set a great example for him as his dad. And hopefully we get the odd thing right as parents raising him.

“Whatever he does in life, he has to know that you must keep at it, and never give up. I won the Masters semi-final against Mark Williams getting two snookers…who does that?

“He plays football in goal which is an extremely difficult position to play as an 11-year-old, if a goal goes in it is all your fault.

“So I try and teach him the values of sport and the mentality of thinking forward, and never behind and backwards on what has gone. And that’s what I did in the final.

“The position of goalkeeper in football is the one most like playing snooker, you are at times on your own and an individual more than the others, with times you can’t rely on your team-mates.

“I am super proud of him, he is playing against Watford next week and I can go and watch with no tournaments on.

“But as well as what Alexander said to me, I sit there when I could be under the most intense pressure and say to myself ‘What is the worst that could happen here?’ 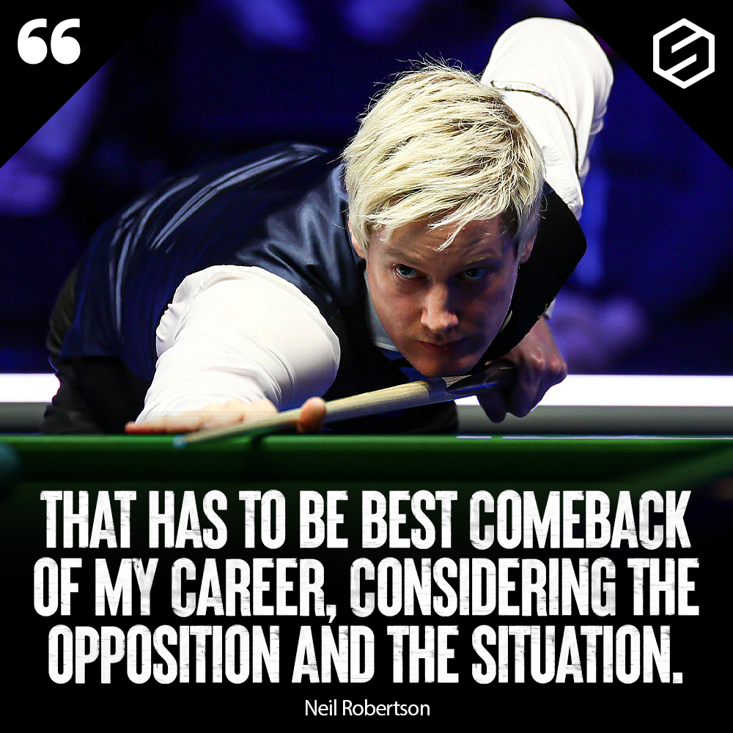 “You look at all the terrible things going on in the world, and I find that relaxes me in the arena. I think even if I lost, how many millions around the world would rather be in that position?”

Four-time world champion Higgins, 46, suffered a horrible defeat at the Venue Cymru in Llandudno late on Sunday night – losing the last six frames to Neil Robertson for an agonising 10-9 loss.

It was the sixth final world No6 Higgins has reached this season – but he has lost all five major ones, winning just the low-key Championship League.

Robertson came back at Higgins from 8-6 behind to win the English Open last year, with Mark Allen doing exactly the same in the Northern Ireland Open final.

But to give up a first Tour Championship success and the £150,000 first prize from 9-4 up was on a different scale altogether.

Hendry said: “I am still getting over how John lost that match – it was painful to watch how that match frame by frame slipped away from him.

“It was almost like car-crash TV. I really feel for John, but that is sport at the end of the day.

“I thought even when Neil was 8-4 down, if he could just get to 8-6 with the finals that John had lost this season – two from 8-6 up, first to nine – then he would start to feel the pressure.

“In the big finals he has made this season, he hasn’t managed to get the job done.”

Somehow Higgins must try and erase this experience and rouse himself for the Betfred World Championship – which starts in under two weeks.

Higgins said: “It is a very tough one to take and I felt numb at the end. I don’t think I did a hell of a lot wrong from 9-4 apart from a couple of frames.

“I enjoyed the occasion and playing Neil - it is just the way it ended, which could leave some really, really tough mental scars.

“I don’t know how I will pick myself up for the World Championship after that, who knows.”