Football
News
The Gers face Frankfurt on Wednesday in their first European final in 14 years
Conor Keane
15:27, 17 May 2022

Wednesday’s Europa League final against Eintracht Frankfurt in Seville will be Rangers’ biggest game for over a decade. Thousands upon thousands of Gers fans have begun descending upon the Spanish city for a final that few would have ever pictured the Scottish side featuring in. But they have fully merited their place in the 2021-22 showpiece.

After failing to qualify for the Champions League, Rangers dropped into the secondary competition, but they have tackled it with aplomb and are now just one game away from glory.

This is how they got there.

Rangers’ journey has been all the more impressive given their slow start in the group stage. They tasted defeat in their first two matches under Steven Gerrard, first a 2-0 home defeat against Lyon and then a 1-0 loss away to Sparta Prague in which Glen Kamara was sent off.

The Gers picked up their first three points with a 2-0 victory over Brondby at Ibrox on matchday three courtesy of first-half goals from Leon Balogun and Kemar Roofe. This lifted the belief among players and fans, and when the two sides met again in Sweden for matchday four Ianis Hagi popped up late on to rescue a point after a Balogun own goal had looked set to give the home side the win.

Then came the managerial switch. Gerrard skipped town for Aston Villa and ex-Ger Giovanni van Bronckhorst took over. In the Dutchman’s first European game in charge at Ibrox he guided his team to a 2-0 victory over Sparta, with feisty striker Alfredo Morelos scoring both goals to put Rangers in a strong position to reach the knockout stages. All they needed to do on the final day was avoid defeat against Lyon, and they duly came back from France with a point and a place in the last 32. 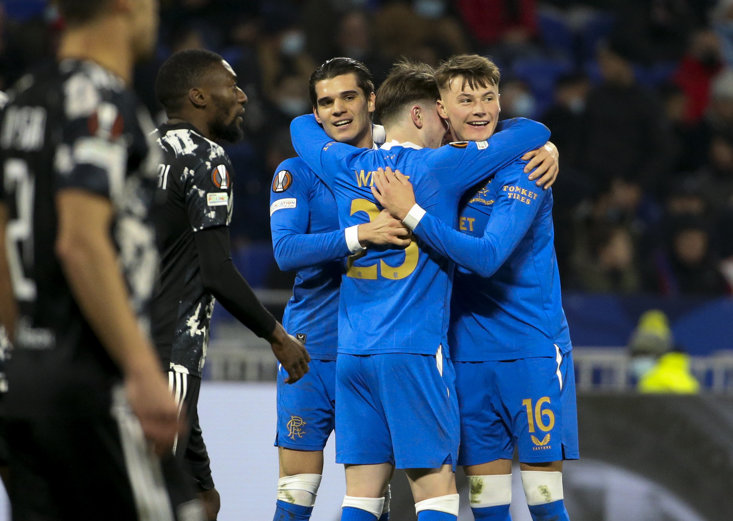 THE GERS CELEBRATE AFTER QUALIFYING FROM THE GROUP STAGE

No one could have predicted this. In one of the biggest shocks in the competition’s history, Rangers travelled to Germany and stunned the home team with an incredible 4-2 victory. They simply outfought and outclassed the Black and Yellows. James Tavernier got things up and running, and Morelos doubled their lead just moments later. John Lundstram’s strike early in the second half had the supporters in dreamland before a Dan-Axel Zagadou own goal helped set up a great second leg in Glasgow, where a 2-2 draw saw Rangers pass through to the quarter-finals.

A comfortable 3-0 win at Ibrox put the Gers in the driving seat of the tie heading into the away leg thanks to a Tavernier penalty and goals from Morelos and Balogun. Nerves would have certainly crept in when Mirko Ivanic put the Serbian side ahead after 10 minutes in the second leg, but they were put to rest when Ryan Kent fired home an equaliser just before the hour mark and the hosts’ late winner was nothing more than a consolation.

Rangers suffered a hangover in Europe after a defeat against Celtic domestically. They lost 1-0 in Portugal and it could have been worse as the hosts had VAR rule out a second and also hit the post. But the Gers regrouped for the home tie and a Tavernier double looked set to carry them through until David Carmo’s header in the 83rd minute forced extra time.  Roofe then raised the roof with the goal that sent them through.

Rangers gave a good account of themselves in their second trip to Germany this season and they were not disheartened when Angelino scored late goal to give Leipzig a 1-0 lead heading to Ibrox. Tavernier gave them an early lead in the second leg before Kamara put them ahead in the tie. When Leipzig’s star of the season Christopher Nkunku levelled the aggregate score, some would have feared the worst. However, Rangers pushed on and Lundstram made himself the hero late on to seal Rangers’ place in the final.