Rugby League
News
The France union defensive coach has moved to a Wigan enclave in the south of France
George Riley
14:35, 13 Apr 2022

Rugby legend Shaun Edwards has emerged as Catalans Dragons’ unlikely super fan and admits he is taking tips from coach Steve McNamara that he will use with Six Nations champions France.

The 55-year-old Wigan Warriors great is the most decorated player in rugby league history, and is now defensive coach with France’s rugby union Grand Slam winners. Yet Edwards spent every day in camp with the nation’s top Super League side Catalans last week in the build-up to their Betfred Challenge Cup quarter-final defeat to St Helens.

He has struck up a big friendship with the Dragons coach McNamara and another Wigan great, superstar full-back Sam Tomkins, after moving down to live in their beautiful coastal neighbourhood at Canet beach. It’s a brilliant tale which has seen the die-hard Wiganer immersed in French culture, taking his family to every Dragons game while living 600 miles away from his rugby union base in Paris.

When the BBC cameras turned up to film with McNamara in his hometown this week, they met at his local café O’Can Mémain, run by Frenchman JD, who doubles up as McNamara’s unofficial French teacher. On the walls are a signed Catalans shirt and a signed France shirt, gifts from the two famous locals. The crew arrived minutes after Edwards had been there. A short phone call later, and Edwards re-emerged and the group were chatting together in the town square.

“Catalans Dragons was the reason I came to live in this area,” says Edwards, who finished his glittering league career with 37 winner’s medals before being inducted into the Rugby League Hall of Fame.

“I knew there would be lads from Wigan and other English-speaking people to help us to integrate. The family go to all the matches and the job Steve has done has been remarkable. They are one of the best teams in Super League.” 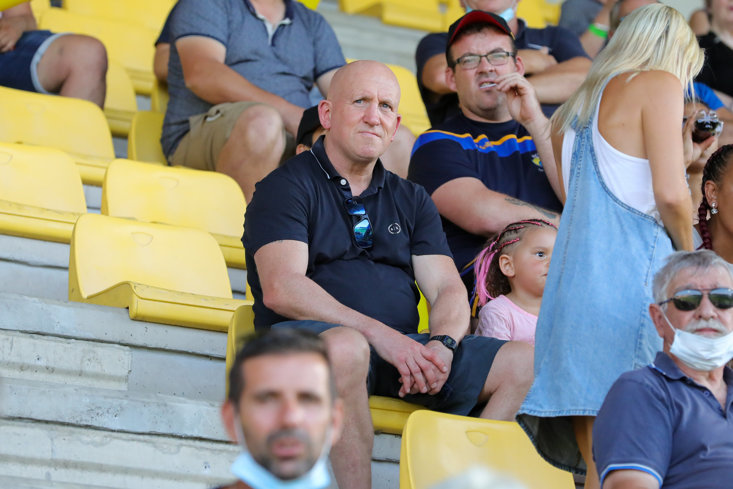 EDWARDS HAS BECOME A REGULAR AT THE STADE GILBERT BRUTUS

When Edwards was appointed defensive coach for France’s union side two years ago it was expected he would move to Paris. Indeed the contractual stipulation was for him to be based in France. But having looked around the giant French capital, the local boy from Wigan didn’t feel he was at home.

So he jumped in his car, drove 11 hours through France to visit Tomkins and co in the southern league heartland, and within two weeks he had moved there - living in France, but further from Paris than had he stayed in London.

“Shaun drove down, came to the stadium and said 'I can’t believe there’s so many Wiganers about, I'll just live down here,'” says Tomkins, who also describes Edwards knocking at the door and walking straight through the house to bomb into the swimming pool, even before saying hello. “I never thought I’d be down living in the south of France knocking about with Shaun Edwards.”

“We are in a foreign country so it’s good to feel part of a group,” Edwards adds. “I’ve always felt part of Macca’s group and I’ve learned tips from Steve that I will be using with the French team.”

The Dragons ultimately saw their Cup run ended by the all-conquering Saints and also saw star man Tomkins hobble off with a fractured fibula.  But the atmosphere in the town all week and in the ground on matchday underlined that rugby league is on to a very good thing in France, with passionate crowds and unwavering support.

We will see that again this week when they meet Toulouse in Super League’s first-ever all French derby as part of 'Rivals Round' which is essentially a weekend of fierce derbies, Saints v Wigan the undoubted highlight.

Elsewhere this week we saw a bit of history as Cornwall played host to its first ever league game in Betfred League One. This is the latest project for expansion beyond the heartlands and was more promising off the pitch than on it.

Around 1500 fans saw history made in Penryn, which is a terrific platform to build upon at this level. Rugby Football League chief executive Ralph Rimmer called it “a fabulous start” and believes “this club will grow”.

But it was a pretty ugly watch for the home side as they conceded 60 points for the second game in a row in defeat to Midlands Hurricanes. I'm excited about commentating on the Cornwall games this season but this has been a pretty brutal start, making a difficult game to keep viewers interested to the end.

On that note, spare a thought elsewhere in League One for West Wales Raiders, who on Sunday travelled up to an Oldham side who had endured a difficult start to the season. West Wales lost 100-4, a scoreline that did little to reassure anyone concerned about rugby league’s future in Llanelli.

It was also a scoreline that prompted statements from both the club’s head coach and chief executive this week. CEO Peter Tiffin called it “a difficult one to take”, hopes it will prove “a massive positive step”, and added that “an arrow needs to be pulled back before it can go forward.”