Tennis
News
How The Simple Tennis Serve Transformed Into The Most Important Shot In The Sport
Simon Lillicrap
14:55, 01 Jul 2019

Wimbledon - the best and most historic tennis tournament in the world got underway today. With two weeks of tennis to look forward to, we have taken a deep dive into the most overlooked skill in sport, the serve.

Ever since A.T. Myers delivered the first ever overhead serve at Wimbledon in 1878, there has been a fascination with how each point is started. This was a revolutionary move by Myers as every preceding served to that was done underhand and simply used as a method to get the ball in play, rather than a chance to win the point.

The net back in those days was around four foot high and there were no official court regulations making it much more difficult to hit a powerful downwards serve. According to Bud Collins’ History of tennis, that was the case until 1883, where the rectangle court and official net height of three and a half feet was officially introduced into the sport.

The Americans began to master the serve in the early years, with their experience of baseball cited as a reason for their ball throwing expertise. Dwight Davis served with extreme side spin in the 1890s before Maurice McLoughlin took this to the next level with his powerful ‘cannonball’ serve, in 1913. Legend has it that he hit 163mph although this seems like a questionable figure given the speeds we have seen since then and the speed-measuring technology that was used at the time.

Heavy wooden racquets were still in fashion by the time Ellsworth Vines played at Wimbledon in 1932 but the game had developed over the past three decades. Players were improving in size and strength, a fact typified by the fact Vines hit a 121 mph serve and 30 aces in the final, as the powerful American beat home favourite Bunny Austin to the title.

Austin said after the match:  “I saw him swing his racket and I heard the ball hit the back canvas. The umpire called game, set and match, so I never saw the ball."

This was a big moment for the sport. Vines’ massive serve gave him such an advantage over his fellow competitors and proved what a weapon it could be, if you could perfect it. Alice Marble was one of the pioneers of the big serve in the women’s game, using it to win Wimbledon just seven years after Vines’ success.

World War Two paused proceedings but in the 1950s the Big Game was introduced by Jack Kramer. With the new, more powerful laminated wooden racquets it favoured the taller stronger man and focused on a big serve followed up with an aggressive, attacking style of play. Pancho Gonzalez learnt from him and became one of the best of the era, winning the US Pro tournament for seven consecutive years in the 50’s.  Althea Gibson, at five foot eleven, had similar success during that period in the women’s game due to her strength and smooth serve.

LA Memorial Coliseum
@lacoliseum
#OnThisDayinHistory @lacoliseum: Feb. 12, 1939- The Coliseum hosted its first tennis match between Don Budge and Ellsworth Vines. The tennis court was made out of hardwood, and placed it on the west end of the stadium, forming a natural amphitheater.
#GreatestStadiumintheWorld 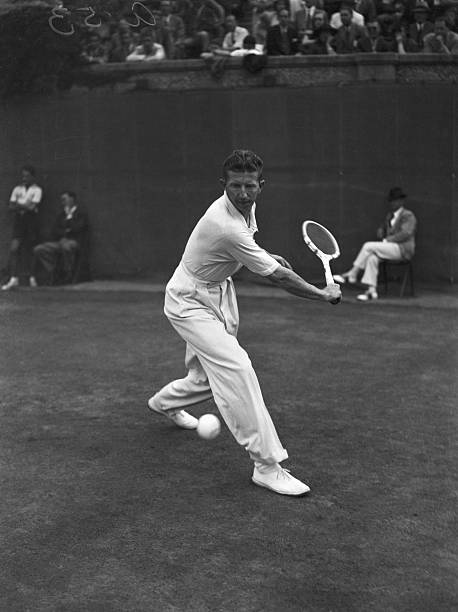 In 1961, the laws of the game changed completely but almost went unnoticed. For years, it had been a rule that when serving, players must keep one foot on the baseline however that law was then scrapped, giving players freedom and most importantly, more height when serving.

This rule didn’t change much for almost a decade as players stuck to what they had practised in training. The launch of steel tennis racquets and investment into that area of the sport meant that serves were getting quicker and quicker by the time the 70s came around.

In 1975, Colin Dibley raised the bar when it came to serving, hitting a serve of 148mph in Las Vegas. The rest of his game never quite matched up to his powerful serve but he had showed the speed that could be achieved on a tennis court. In 1978, Roscoe Tanner recorded a ridiculous serve of 153mph, a record that lasted until 2004.

The introduction of the radar gun in 1989 allowed for accurate measurements to be taken on the spot, leaving no room for debate about who had the fastest serve. This also seemed to bring the recorded measurements down slightly, despite some big servers flexing their muscles.

Goran Ivanisevic hit a record 1477 aces in 1996 averaging around 133mph and Pete Sampras is often regarded as one of the finest servers of all time, but rarely served quicker than 130mph, instead relying on topspin to hit aces. The 1011 he hit in 1993 is testament to that skill.

The development of racquets allowed for different serving styles but the quickest serving speed steadily rose through the 150mph barrier. British player Greg Rusedski hit 149mph at Indian Wells 1998, before Andy Roddick hit 155mph, a new record at the Davis Cup in 2004. Only John Isner and Ivo Karlovic have hit faster official serves than Roddick as recognised by the ATP, with Isner hitting 157.2 mph in 2017 and Karlovic 156mph in 2011.

Australian Sam Groth has hit the quickest recorded serve in history, at a huge 163.7mph back in 2012, and although all of the recording tools used were approved by the governing body, the lack of uniformity in the radar guns mean it is not recognised by the ATP.

Given both of the top two speeds recorded were in 2012 it is difficult to see how much faster serves can get. Technology continues to improve in the game but, especially in the men’s game, players such as Roger Federer and Novak Djokovic have shown that a fluid defensive game is now more important than a giant serve.

For reference, Rafael Nadal and Djokovic have never hit a serve faster than 140mph, and Federer’s best is 143mph. The game has changed massively as we move away from the classic serve and volley technique, but we would have loved to see some of the greats of the past such as Maurice McLoughlin and Colin Dibley serve with modern technology. 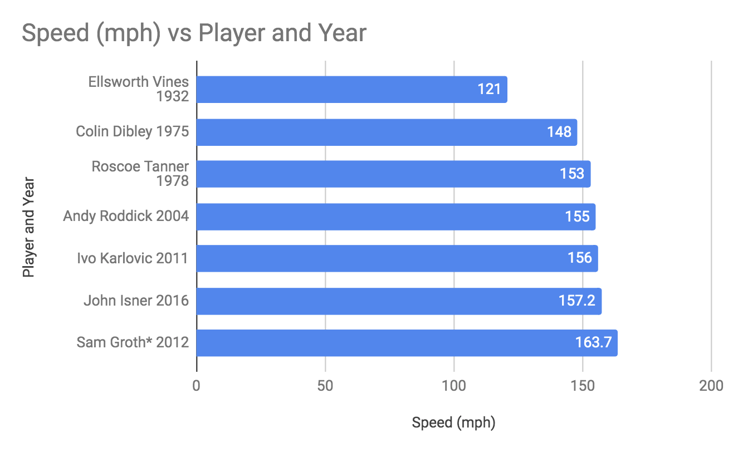