Football
News
The Dutchman has struggled domestically but soared on the continent
Kris Voakes
11:15, 06 May 2022

When the four-point lead Steven Gerrard had left behind at the top of the Scottish Premiership quickly disappeared, there were reams of paper and hours of airtime given over to the argument pertaining to Giovanni van Bronckhorst’s position as Rangers manager.

The Gers’ advantage became a deficit within two months of the Dutchman’s appointment as Gerrard’s successor, and Celtic’s revival under Ange Postecoglou has taken place against the backdrop of missed opportunities and dropped points for the blue half of Glasgow. Draws with Aberdeen, Dundee United, Motherwell and – perhaps most frustratingly – Ross County, underlined an inability for Van Bronckhorst’s side to put teams to bed.

But in Europe the story has been gloriously different, and Rangers head into the Europa League final later this month full of confidence that Van Bronckhorst can finish off the job of leading the club to a first continental title in 50 years following another sensational night at Ibrox on Thursday as the Gers beat RB Leipzig 3-1 to book their date with Eintracht Frankfurt in Seville.

Whereas there has been a frustration with how GVB has set up domestically, his approach to European fixtures has been one of the key elements behind Rangers’ run to the final. The utilisation of John Lundstram as a part-central defender, part-holding midfielder has been a stroke of genius, and it was fitting that the former Sheffield United man should score the decisive goal. 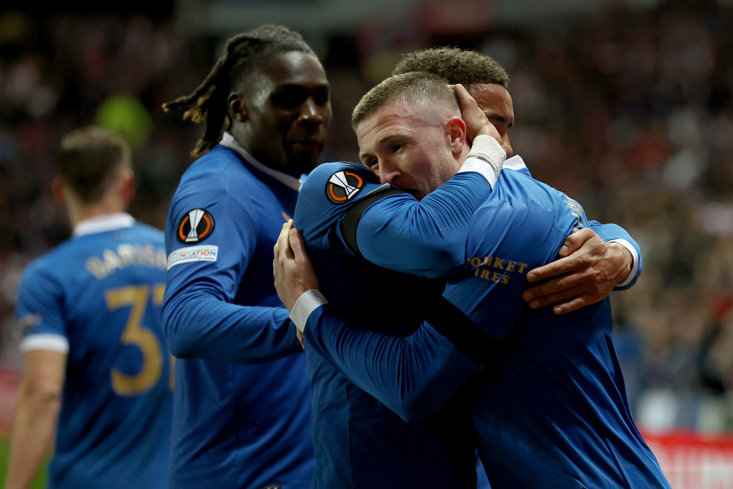 The manager has also been able to coax performances out of the likes of James Tavernier and Ryan Jack which have helped to take Rangers’ game to another level on the European stage. While Gerrard made the club a regular concern in the knockout stages for the first time in a decade, Van Bronckhorst has found a way to get the team beating some of the bigger names rather than just competing with them.

The stunning 4-2 success away to Borussia Dortmund which launched their knockout campaign was an undoubted highlight as the Gers took it to one of the continent’s most dangerous teams, scoring four goals in 16 minutes either side of half-time and threatening more late on at the Westfalenstadion. And following their eventual 6-4 aggregate win in that round, the run has followed a very distinct pattern.

Narrow away defeats have been suffered in the last three rounds, but at every turn Rangers have been adventurous and clinical at Ibrox. Red Star, Braga and Leipzig have all come to the west of Glasgow and been tagged with three goals apiece as Van Bronckhorst has ensured his team play with a width and structure which allows them to attack from all angles.

Even on Thursday, with no Alfredo Morelos, Kemar Roofe, Aaron Ramsey or Ianis Hagi in the starting lineup, Rangers had the edge needed to cause Leipzig problems all over the pitch. The extra player in the middle of the park has allowed the likes of Tavernier and Borna Barisic to provide more regular issues to the opposition, while the decision to get both Barisic and Calvin Bassey playing time in tandem has paid huge dividends. 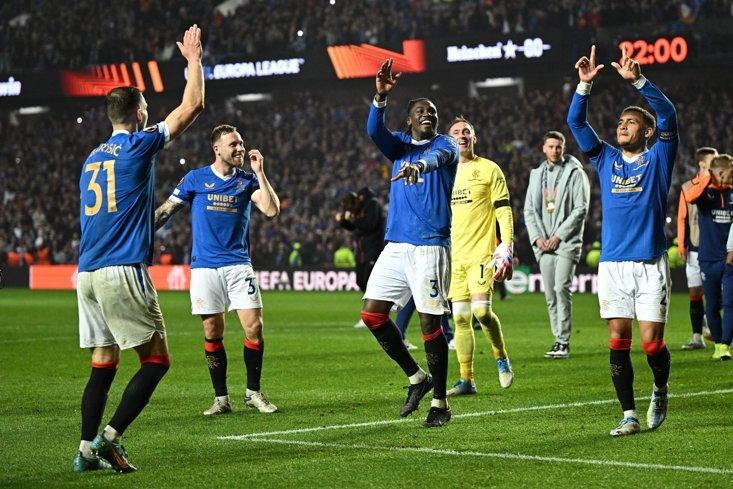 BASSEY, BARISIC AND TAVERNIER HAVE EXCELLED

The Nigeria international had previously had to play second fiddle as back-up left-back to Barisic under Gerrard, starting only twice alongside the Croatian in the Englishman’s time in charge, but he has now become a permanent consideration under Van Bronckhorst as a left centre-half. The move has made Rangers both dynamic and dependable on the flank.

Having made it this far, though, there will be a great resolve for one more huge night. They got to the same position in 2008 but barely laid a glove on an excellent Zenit St Petersburg side boasting the likes of Andrey Arshavin, Anatoliy Tymoshchuk and the red-hot Pavel Pogrebnyak. This time around they will fancy their chances more against a Frankfurt side who have shown resilience more than brilliance to this point.

Van Bronckhorst was the first person to underline the need to treat the final as the huge opportunity it is following Thursday’s second leg. “Not many players can play European finals. It’s not for every player,” he told BT Sport. “Once we’re there, we need to do everything to win it.”

And with a squad looking built for the challenge of European football, it would take a brave onlooker to deny that they have every chance of breaking that 50-year duck.