Football
News
Four decisions so far this season in the Premier League so far have been incorrect
Steven Allen
14:45, 13 Sep 2019

This week, it was announced that four decisions so far this season in the Premier League were incorrect and VAR failed to intervene in the decision-making process for the referee. We’ve had a look at those anomalies and checked how it could affect the table.

VAR has reviewed 227 incidents with six on-field decisions being overturned. All bar two of the Premier League clubs have had VAR decisions shown on screens at the stadium, meaning fans can see for themselves what decision should be made and whether they can carry on screaming for a red card or a penalty.

VAR has been divisive so far in its debut Premier League season, with the Managing Director of Professional Game Match Officials Board (PGMOL), Mike Riley coming out to address the uses of VAR so far this season.

Riley stated: "There were four incidents where VAR didn't intervene and had they done, we would have a better understanding of the role VAR plays in the game.”

We’ve had a look at those four incidents and predicted what the table would’ve looked like if those decisions were given, and in the case of penalties, if they were successfully converted.

Fabian Schar scored an equaliser against Watford in Newcastle’s last outing, following what the Premier League deemed a handball to force the ball to drop to the feet of Schar. He finished the chance and brought the score level and there were no further goals in the game.

If VAR had decided to overturn the referee’s decision, Watford would’ve entered the second half leading by a goal. Newcastle did start the second half of the game better than Watford but struggled as the half went on.

The Hornets also stepped up the pressure in the final 10 minutes of the game and might have sealed it with a last minute chance from Roberto Pereyra.

Overall, we’d say that the game would’ve finished at 1-0, with Watford taking home their first points of the season and maybe could’ve kept Javi Gracia in a job.

In regards to the Premier League table, Watford would remain in 20th on minus-six goal difference, with Newcastle dropping from 14th to 19th in the table, and would be just above the Hornets with a minus-four goal difference.

Youri Tielemans bagged a goal against The Cherries in the last gameweek before the international break, alongside a Jamie Vardy brace that was enough to seal another win for Brendan Rodgers’ side.

Tielemans got into a bit of hot water with the away fans after missing the ball whilst lunging for it, landing on Callum Wilson’s ankle with the potential of causing serious injury.

Although Tielemans may not have intended to land on Wilson’s ankle, the tackle was clearly dangerous and Mike Riley has confirmed that this is a decision that was wrongly not overturned, suggesting that he agrees that the Belgian should’ve been walking.

In regards to the game, Leicester were already 2-1 up and dominating against Bournemouth - the red card may have forced Rodgers’ men to step down the pressure but we couldn’t see Bournemouth getting a result from that red card.

The table would be unaffected but Tielemans would miss Leicester’s next game against Man Utd, a key clash for The Foxes.

A second appearance from Bournemouth in this list, not that they can help it. This time it was Jefferson Lerma who attempted to dispossess David Silva in the box, missing the ball and causing the Spaniard to fall, which in turn should have resulted in a penalty. The referee missed the incident and when VAR watched back on the replay, no decision was made on the foul so play continued.

Realistically, Man City were 2-1 up at the time and were likely to convert the penalty, however they still grabbed a third goal towards the end of the match, anyway.

This could have bigger repercussions in the title race. As we found out last year, Man City and Liverpool went all the way to the final game where a single point was the difference between first and second place.

City could be left ruing missed chances later on in the season if they’re left in the dust by Liverpool. 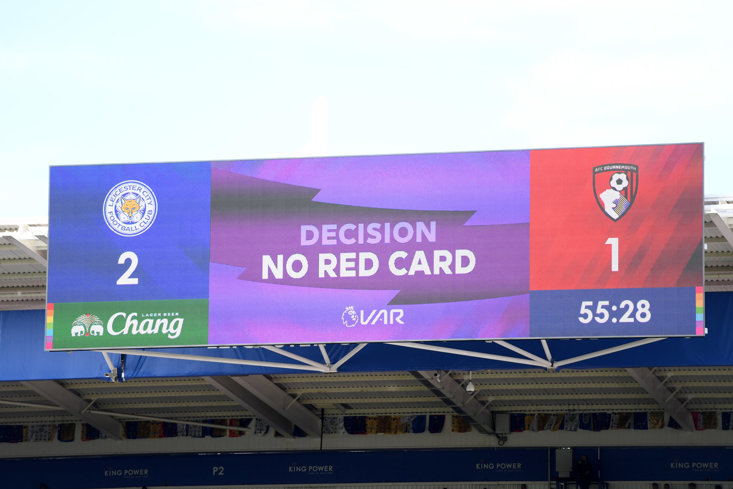 The final big penalty shout was when Sebastien Haller broke through into the box and took the ball past Norwich’s Tom Trybull, where he was fouled in the box.

An ensuing penalty would’ve made the score 3-0 to West Ham, with The Hammers claiming their first home win of the season.

Similar to Man City, West Ham already had control of the game, so the penalty wouldn’t have changed the result and with Manuel Pellegrini’s side unlikely to challenge for the title this season, their goal difference may contribute to moving above teams around them but not enough to decide their entire season.