Football
News
If the 37-year-old does leave Manchester United this summer, what effect will that have on his teammates?
Joey Mills
14:05, 07 Jul 2022

The dark cloud of the Cristiano Ronaldo transfer saga still hangs over Old Trafford. Some think the Portuguese legend should be retained at all costs. Others point to his age, he turns 38 in February, and the restrictive need to build the team around him as reasons to embrace his departure. It is not known how the saga will end yet, with Bayern Munich withdrawing their interest but Chelsea still reportedly pushing for a deal.

If Ronaldo does line up in royal blue next season, or the colours of another suitor, what will that mean for Manchester United? Here is what the departure of ‘CR7’ would mean for five attacking talents at Old Trafford.

Rashford scored 21 goals in all competitions in the 2020-21 season. Last term he netted just five times. There were mitigating circumstances beyond just Ronaldo’s presence. His penalty miss in the Euro 2020 final and the horrifying abuse he received on social media afterwards noticeably hung over him. Rashford also entered the season carrying an injury and eventually found Jadon Sancho favoured in his preferred left-wing role.

But Ronaldo might well have impacted the England man too. After all, the 37-year-old does like moving out to the left hand side before cutting in, essentially occupying Rashford’s on-pitch real estate.

The most drastic change we might see in Rashford if Ronaldo departs is positionally. With Sancho excelling on the left, and manager Erik ten Hag eyeing a move for Ajax winger Antony rather than pursuing a centre forward, Rashford could be deployed in a central role. The same could also be true for our next man on the list.

Striker, winger, goalscorer, enigma. During the pandemic season, the Frenchman looked like one of the best forwards in the league. Since then he has looked like one of the worst. Sevilla couldn’t get a tune out of him on loan last season, and despite reportedly being available for sale he has thus far had no takers.

But Martial is talented. His application is questionable at times, but the boy can play. The 26-year-old is also happiest when relied upon as the club’s main striker. With Cavani gone and Ronaldo likely to follow, if United don’t buy anyone to fill the void he would arguably be their first-choice.

It might be too much to ask for Ten Hag to revive the flagging fortunes of the France international, but it bears repeating that last time he was the club’s main striker, he had his best-ever scoring season. In 2019-20 Martial netted 17 Premier League goals, just one less than Cristiano Ronaldo managed last term. 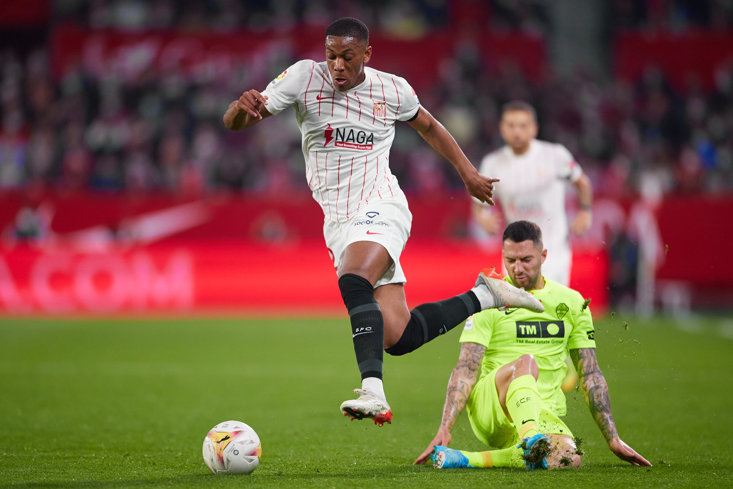 Sancho has struggled in his first season of Premier League action. He was not helped by an adjustment period that saw the manager who bought him, Ole Gunnar Solskjaer, sacked three months into the season.

The ex-Borussia Dortmund winger was one of the few players to gel with interim manager Ralf Rangnick and improved as the season went on. Sancho made the left-wing role his own after initially being bought to play on the opposite flank. Ronaldo’s exit and a possible centre forward role for Rashford could see him continue on the left side.

Fernandes excelled in his first two seasons at Old Trafford due to being allowed to play with less positional restrictions than his teammates. Bruno’s free role was curbed by the need to accommodate Ronaldo and, like for the Portugal national team, the two never really clicked.

Giving Ronaldo a free role gives you goals. Giving Bruno freedom gives you goals, assists and progressive passing. The 27-year-old was at his best when he was United’s undisputed star man. If his countryman leaves he can return to those heights.

One of the few players to publicly talk about how Ronaldo’s influence has benefited him, the 20-year-old featured 27 times in his breakthrough campaign last season. The pair seemed to dovetail well on the pitch, and despite amateur body language experts trying to find fault, the partnership was built on mutual respect.

Elanga is one of the few players who could be harmed by the loss of someone who was a mentor figure to him. There are other experienced players in that dressing room, but none who have done what Ronaldo has in the game. It will be up to the likes of David De Gea, Raphael Varane and the incoming Christian Eriksen to ensure Elanga’s standards don’t drop.

ronaldo next club odds via betfred*