Rugby League
News
The Giants coach is looking to implement systems which will benefit his side longer term
TheSportsman
12:55, 03 Sep 2021

Ask Ian Watson to use one word to describe his first season in charge at Huddersfield Giants, and it would be “disrupted”. Disrupted by Covid, disrupted by injuries to key players, and disrupted in terms of being allowed to implement the long-term systems he wants to at the club.

Look at the Betfred Super League table and the Giants sit well below where many well-placed observers predicted they would finish, having been widely labelled competition dark horses before a ball was kicked.

But despite all of that, former Salford Red Devils boss Watson also sees plenty of positives in what has unfolded in 2021, not least in the performances of a cluster of talented young players.

“It’s been a bit chaotic with the amount of injuries we’ve had and the Covid situation,” Watson explains.

“It disrupted quite a lot of what we wanted to do in pre-season in terms of team stuff, and when it disrupted us again during the year we had to use games to help learn systems, and develop as we went on.

“The only thing you want to stay consistent through all of that is your spine because they control the team and run it, but that’s the big area we’ve had no consistency at all. But there have still been plenty of positives. 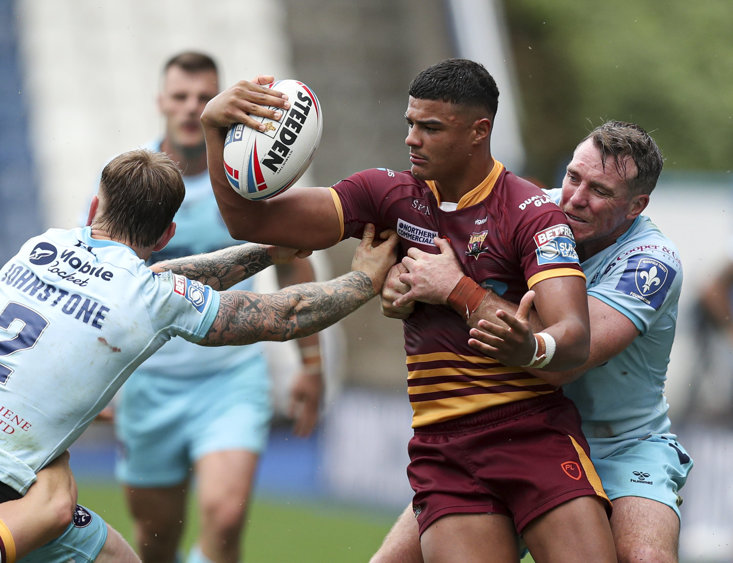 WILL PRYCE HAS BEEN A STANDOUT STAR OF 2021

“In the first year you go into a club you want to assess the situation and see why it’s not been successful, because like I said when I got here at the start, everything is in place at Huddersfield in terms of facilities and the youth system.

“We’ve identified what was wrong in the group and which areas we need to strengthen. And the biggest positive has been the amount of game time our younger players have got.

“I’m a big believer that young players need as many as 50 first-team games before they fully understand their roles, and the experience a lot of them have had this year will really set us up.

“I’ve been absolutely made up with them, they’ve done really well to compete the way they have against more experience teams. It puts us in a really good position and it’s something to be excited about going forward.”

Stand-off Will Pryce has understandably earned most of the headlines this year, but the likes of Sam Hewitt, Owen Trout, Oliver Wilson and Oliver Russell have also become mainstays of Watson’s team.

Although the top six might be out of reach, Watson is still keen for his side to finish the campaign on a high, including their Dacia Magic Weekend clash with Wakefield Trinity.

He adds: “Wakefield have a really good, experienced team and I expected them to do well this year the way they set up.

“They’ve got the right kind of experience in key positions and we need to make sure we’re on our game.

“There’s a little bit of a local rivalry there as well and we’re looking forward to it.”