Rugby League
News
Ian Watson will pit his wits against one of the greatest coaching brains British rugby league has ever seen​ this weekend
George Riley
09:35, 07 May 2022

When Ian Watson leads Huddersfield Giants into a prized Betfred Challenge Cup semi-final this weekend he will pit his wits against one of the greatest coaching brains British rugby league has ever seen.

Tony Smith stunned Hull KR a fortnight ago with his decision to leave the club at the end of the season, and will now look to sign off in style with another major final appearance.

Yet in Watson, Smith may be meeting his match. An impressive, highly-rated yet under-the-radar head coach who has quietly taken perennial also-rans Huddersfield and moulded them into genuine contenders.

Giants and England prop Chris Hill tells me that Watson is one of the finest coaches he has played under in his own illustrious career. “He’s definitely one of the best coaches around, I would love to see him coach in the NRL,” says Hill. “He is one of those blokes who lives and breathes rugby and I don’t think there’s many of them knocking around.”

Watson’s blossoming credentials will meet their ultimate match at Elland Road in Rovers boss Smith, winner of two Grand Finals and a World Club Challenge at Leeds, before delivering three Challenge Cups to Warrington in four years. His imminent departure is a big blow to Hull KR but one that could yet prove a huge catalyst in their current pursuit of silverware.

Watson is fast-developing Smith’s own knack of reaching finals, guiding unfancied Salford to the 2019 Grand Final and then the Challenge Cup Final the following year, with both ending in defeat.  But this is Huddersfield’s first last-four appearance in 10 years, and the 45-year-old former Wales international is refusing to make this weekend about him, his battle with Smith, nor his own pursuit of that elusive silverware.

“We have known for years what Tony Smith brings to a team and how he likes to come up with some trick plays to test you in different ways,” he told The Sportsman. 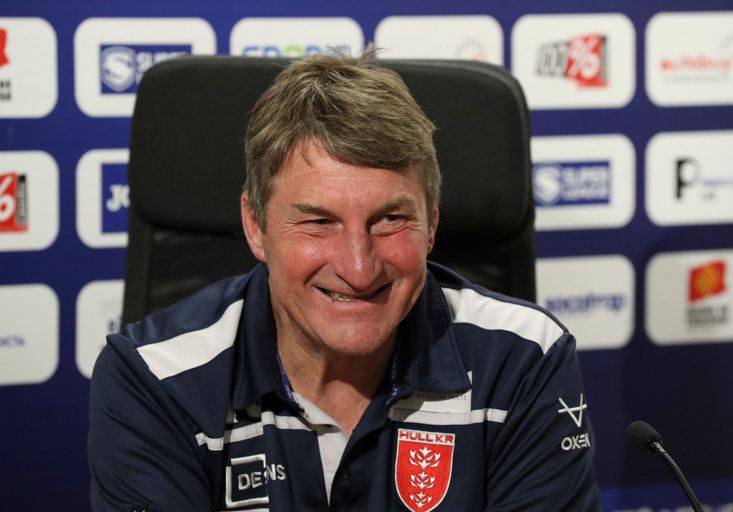 “If you work hard and do the right things you get to sample big atmospheres like this. It would be huge for the players and their families to experience a final.

“People can let emotions get to them and get a little bit carried away so we want to be nice and controlled in what we are doing and play the game for what it is, then we can enjoy the atmosphere afterwards.”

One of the keys to Watson’s success this season – as well as this semi-final the Giants are fifth in Super League and right in the hunt behind St Helens and Wigan – has been the balance he has managed to gel between youth and experience, old heads and rising stars. And it speaks volumes for Huddersfield’s roster that they’ve adapted to the lengthy suspension picked up by star of the future Will Pryce.

“There will be young players who have never sampled this before” he admits. “But then senior players like Chris McQueen, Chris Hill, Theo Fages who can drop their experience and show what it takes to come to a semi-final and get a result.

“You look at our captain Luke Yates who breathes that work ethic and a team-first mentality, as do the other guys I mentioned. And it is really good for you when you have the quality of Tui Lolohea who can win the game for you off the cuff.”

Rovers will miss their sprinkling of stardust, with full-back Lachlan Coote forced to miss out through concussions protocols. But quietly watching with Smith on the sidelines they have the experience and guile of one of the most dangerous attacking weapons that the northern hemisphere game has ever produced.

Smith’s assistant coach Danny McGuire was the architect of the greatest ever Challenge Cup semi-final comeback 19 years ago. Leeds were down and out to St Helens in Huddersfield with the clock winding down, as Saints crashed over for a try to extend their lead to six points with a conversion to come.

The kick to book their place in the 2003 Final was missed, the Rhinos recovered the ball from the restart, and teenage substitute McGuire produced an electrifying dash to squeeze over in the corner.

Kevin Sinfield nailed the touchline conversion with the last kick of the 80 minutes and somehow Leeds had salvaged extra-time from the jaws of defeat. McGuire then produced a second moment of magic in that extra period to seal a stunning win.

It was the most stunning of comebacks, and one missed by many fans, including this writer, who had already started the car engine as Saints were lining up the match-winning kick.

McGuire’s impact at the start of his coaching career is already evident in Rovers’ incisive attacking play, and even without Coote there will be constant danger.

We would be spoilt in expecting such drama on Saturday, but all the ingredients are there for Huddersfield and Hull KR to seize their moment and book a Betfred Challenge Cup final date at Tottenham against Wigan or Saints.