Hull’s Kiwi Prop Andre Savelio got the scoring underway with a 20th minute try and it was one-way traffic for the rest of the half as they went in for the break 14-0 ahead courtesy of a Josh Reynolds try and six points from the boot of Marc Sneyd.

It was a similar scenario after the interval, as a second try of the game for Reynolds followed by Josh Griffin going over, both converted by Sneyd, putting them 26-0 ahead before Salford’s only score of the game came courtesy of a Ken Sio try. Hull put another converted try plus a penalty and a drop goal to run out easy winners.

Winning coach Brett Hodgson told Sky Sports “I loved the way we finished off the game. We ask for effort all the time from the players and I thought what Scott Taylor did at the end with that tackle. There was no need for it, but the fact he was willing to do that is a great habit to have at the club.”

“There is definitely talent in the spine of the team, but you need forwards to play well for the spine to perform and I thought our forwards today were outstanding.”

Hull FC will be happy to have a fortnight to recover ahead of the game with Warrington Wolves after both Sneyd and Reynolds limped off with injury, with the Betfred Challenge Cup fixture with Featherstone Rovers on the agenda next weekend.

The afternoon’s other fixture saw Catalans Dragons supplement their narrow success over Hull KR last Saturday by getting the better of Huddersfield Giants in a Sam Tomkins inspired 20-10 victory. 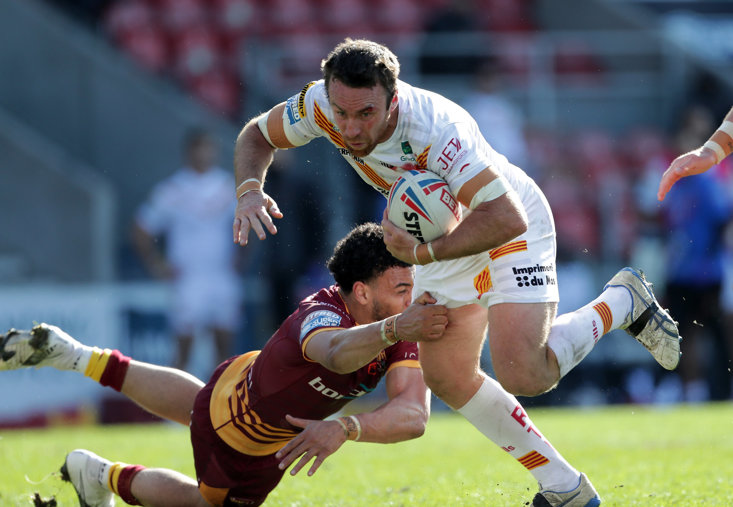 An early Matt Whitley try was cancelled out by Chris McQueen before the French side ran in a further two unanswered converted tries and a penalty to go in 20-6 ahead at the interval.

Just the four points were scored in the second half courtesy of a Sam Wood try for the Giants that reduced the deficit, but they could not build on it and ended the game with twelve men after Joe Greenwood saw red for the final five minutes. It meant the Giants fell to their second defeat of the season and a seventh loss on the spin dating back to last season.

Catalans will fancy their chances of a third straight success when they entertain Salford Red Devils in a fortnight, while the Giants will look to stop the rot against Hull KR on the Friday evening.

There is a week’s break now in Super League with the third round of the Betfred Challenge Cup taking centre stage next weekend.