Hull Kingston Rovers pulled off an incredible upset tonight at the Halliwell Jones Stadium, beating Warrington Wolves 19-0 in a remarkable game of rugby league. Rovers were only saved from relegation last year by Toronto Wolfpack’s expulsion from the league, and are taking part in the playoffs for the first time since 2013. They weathered the early Warrington pressure to lead at half-time, before coming on strong to earn a tricky trip to Perpignan next week, where they will meet League Leaders’ Shield holders Catalans Dragons.

The first half saw the Wolves race out of the blocks, threatening through the middle early. Jimmy Keinhorst made a pair of early errors, spilling a high kick and then losing it in the tackle shortly after. The Wire piled on the pressure. The first fifteen minutes saw Rovers barely able to get out of their own half, and there was an early check on a try that was ruled out for a knock-on.

Another early warning sign for Hull KR would come with Daryl Clark crossing the line, but the hooker lost his grip on the ball after a great solo effort. It was these sort of handling errors that prevented Warrington from making their attacking dominance count, and they would be left ruing their carelessness in possession. Completely against the run of play, Rovers finally got inside the Wire 20, and Jordan Abdull dummied out wide to score the first try of the game. Abdull nailed the conversion, and KR had a lead to protect.

The powerful Albert Vete saw his intensity work against him, with a series of big tackles seeing the prop sent to the sin bin. The offence he eventually went to the bin for looked mild, but there was no doubt the referee had acted because of an accumulation of offences. A Matty Storton error gave Wire another look at the Hull KR line, but Tony Smith’s side held strong. A concerted defensive effort from Rovers, coupled with frequent handling errors from The Wolves, kept the score down. 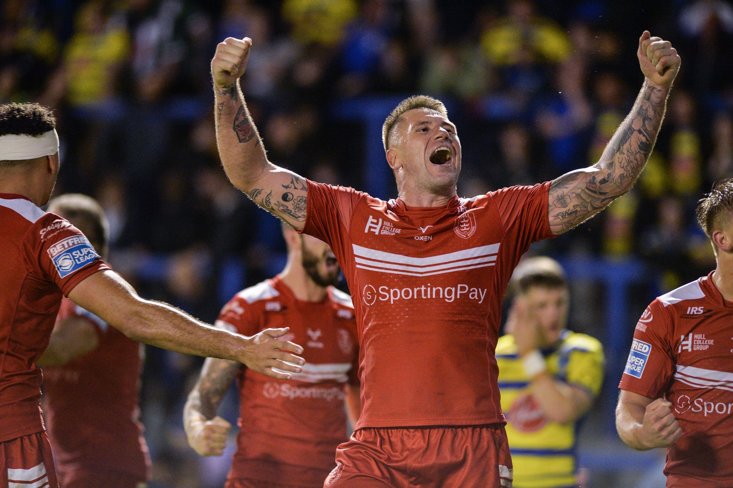 A breathless end to the half saw both sides have chances, as this play-off eliminator caught fire. Abdull dummied for a drop goal, before sending a fizzing kick through to clinch another set for Rovers. Abdull would put a later drop goal attempt slightly wide with time on his side. George Williams had a great chance on the counter, breaking through the Rovers line before being caught as the half-time hooter sounded.

Having soaked up 40 minutes of pressure, Rovers got on the front foot in the second half. Mikey Lewis kicked off the second-period scoring with a lovely chip over the top, getting the benefit of the bounce before taking the ball over the line for their second try. Abdull made it 12-0 with the conversion, and the traveling Robins fans erupted. The half-back had another chance to increase the deficit from a penalty shortly after but put his effort wide. Abdull would make amends when Stefan Ratchford went high on Muizz Mustapha, scoring the penalty for two.

Matty Ashton tried to drive the beleaguered Wire forward, seeing one break stopped by Jez Litten, and then getting a view of the KR line before try-scorer Lewis put a stop to it. Steve Price could only watch as the game in front of him was rapidly becoming his last in the Warrington dugout, as he had said he was departing at the end of the season.

Will Dagger played the killer pass as Rovers outnumbered Wire out wide, and Jimmy Keinhorst sealed the win with the visitors' third try. A truly remarkable Hull KR performance was capped off by an Abdull one-pointer, tying a ribbon on a day that will live long in the memory for Robins fans.

After upsetting the odds to move a step closer to Old Trafford and the Grand Final, former Wire coach Tony Smith can now look forward to one of the toughest assignments in rugby league. The Dragons have enjoyed a superb season, and will be wickedly difficult to beat, not accounting for the travel involved. That is all to come though, for now Hull KR can be satisfied with a superb performance under the lights.