Rugby League
News
The Robins need to fit in four more games to be eligible for the top-six season finale
Kris Voakes
15:57, 20 Aug 2021

After years of battling against the spectre of relegation, Hull Kingston Rovers have an entirely new struggle on their hands in 2021. Over the next four weeks they face a race against time to fit in the final four games they need to complete in order to be considered for the Betfred Super League play-offs.

Tony Smith’s Robins have been the revelation of the season this year, beating Wigan Warriors twice and giving runaway leaders Catalans Dragons three of their toughest tests of the entire campaign on their way to fifth spot after 14 matches. They're now as narrow as 28/1 to win the Grand Final with Betfred such has been their success story.

But with the Super League season due to end on 17 September and with Covid-19 postponements having ravaged the calendar again in 2021, Rovers are in danger of dropping short of the minimum 18-game threshold for play-off contenders. Having seen six consecutive matches postponed (one of them twice) during June and July due to Covid outbreaks both at their Craven Park base and within opposition camps, the east Hull outfit have been playing catch-up on the league ladder.

They are currently scheduled to play six games before the mid-September cut-off, and three wins might be enough for them to beat one or both of Leeds Rhinos and local neighbours Hull FC into the top six. But one more Covid-related delay to their season would leave them living on a knife-edge thanks to the congested nature of their remaining fixture list. 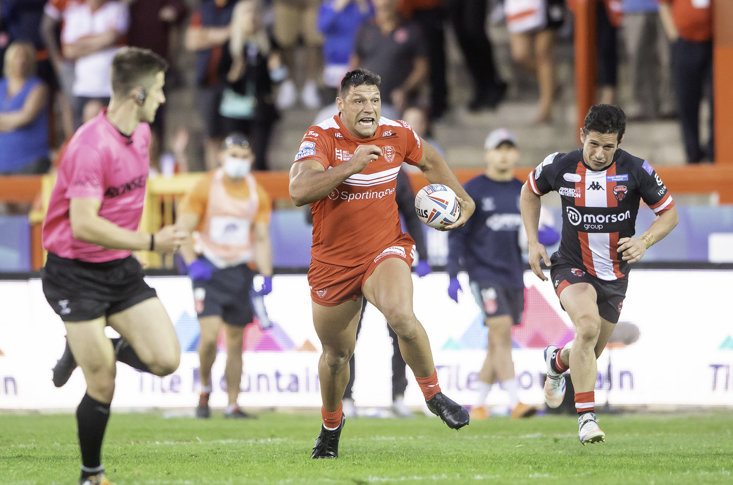 On Saturday they are due to play in the ‘Rivals Round’ against Hull FC at the MKM Stadium. This will be the first Hull derby of the season due to the postponement of the Craven Park fixture despite two separate attempts to get the game on, and the first in front of fans since February 2020, with a crowd of around 20,000 expected.

Were Rovers to miss out on the play-offs due to a technicality it would be a cruel twist of fate for a club used to tussling with those at the bottom of the league at this time of year. They were ever-presents in the controversial middle-eights during the years of the mid-season split between 2015 and 2018, and only secured their Super League status in 2019 thanks to London Broncos’ defeat to Wakefield Trinity on the final day of the season. In 2020 they finished last in the 11-team competition after the withdrawal of Toronto Wolfpack.

But in 2021 they have been an entirely different prospect. With the likes of Shaun Kenny-Dowall, Albert Vete and ‘the Big Red Machine’ Kane Linnett in excellent form, Tony Smith has built a team which is equal parts attractive and tough, flamboyant and durable. With both Matt Parcell and Jez Litten causing havoc from dummy-half, their speed around the ruck has had some of the Super League’s best teams on their heels for long periods of games.

Their three-quarter line has been a stand-out feature of their side too, with the switch of Kenny-Dowall to the left edge this season having helped to build one of the best flanks in the division. Alongside England wing legend Ryan Hall, the league’s top try scorer with 13, and Linnett, the Rovers captain has been part of a formidable combination which has proved almost impossible to stop.

Betfred Super League
@SuperLeague
🗣️ "Jordan Abdull is in a pot & he's fuming. He wants to cut it off & play."
His love of Maths, Leeds reflections, NRL challenges & Saturday's Hull derby are all on the agenda with @Ryan5Hall on @OutOfYourRL this week 💪
Available on Apple Podcasts, Spotify, Amazon & YouTube 👇
19
61

They do head to the west side of the city without star half-back Jordan Abdull, full-back Adam Quinlan and back-rower Dean Hadley through injury, but the red and whites will still fancy their chances up against a Hull FC side who have failed to find their stride so far under new coach Brett Hodgson.

Rovers boss Tony Smith says that while the upturn in results over the last six months has been a great boost, he is as delighted with his side’s style of play.

“People are enjoying watching us, I think that’s really important,” he told the club’s website. “We get a lot of comments that tell us ‘I may not be a Rovers supporter, but I enjoy watching the team.’ That’s great and we’re really proud of that and we want to continue to be that team that people enjoy watching.”

And, Covid permitting, they could yet be taking that thrilling style of play into the end-of-season play-offs for the first time since 2013. But first, there’s the small matter of one of Super League’s standout games against the old enemy from across the River Hull.