It was another action-packed day at The Belfry in Sutton Coldfield for day two of the Betfred British Masters, even if the weather didn’t help enhance the beauty of the Brabazon Course.

German Hurley Long followed his impressive -5 on day one with another positive round on Friday with four consecutive birdies on the first four holes to end the second day in Sutton Coldfield with the clubhouse lead with -9. He was on -10 heading into the final hole, becoming the first player in the tournament to reach double figures under par, only to score a bogey to bring a disappointing end to an overall impressive afternoon.

Scotsman Richie Ramsay clawed his way to near the top of the leaderboard by finishing three under par, taking his score to minus eight after the first two rounds. He may have ended with two more strokes than his first round, but he pulled through on the back nine thanks to three birdies on the 14th and then back-to-back on the 16th and 17th.

Danish duo Thorbjoern Oleson (leader after day one with -6) and Rasmus Hoejgaard followed up their impressive scores from day one in Warwickshire with positive scores to keep them a stroke and two strokes behind leader Long. Oleson’s equal after day one, Ryan Fox suffered a setback after his first round by finishing one over par as four bogeys proved costly. 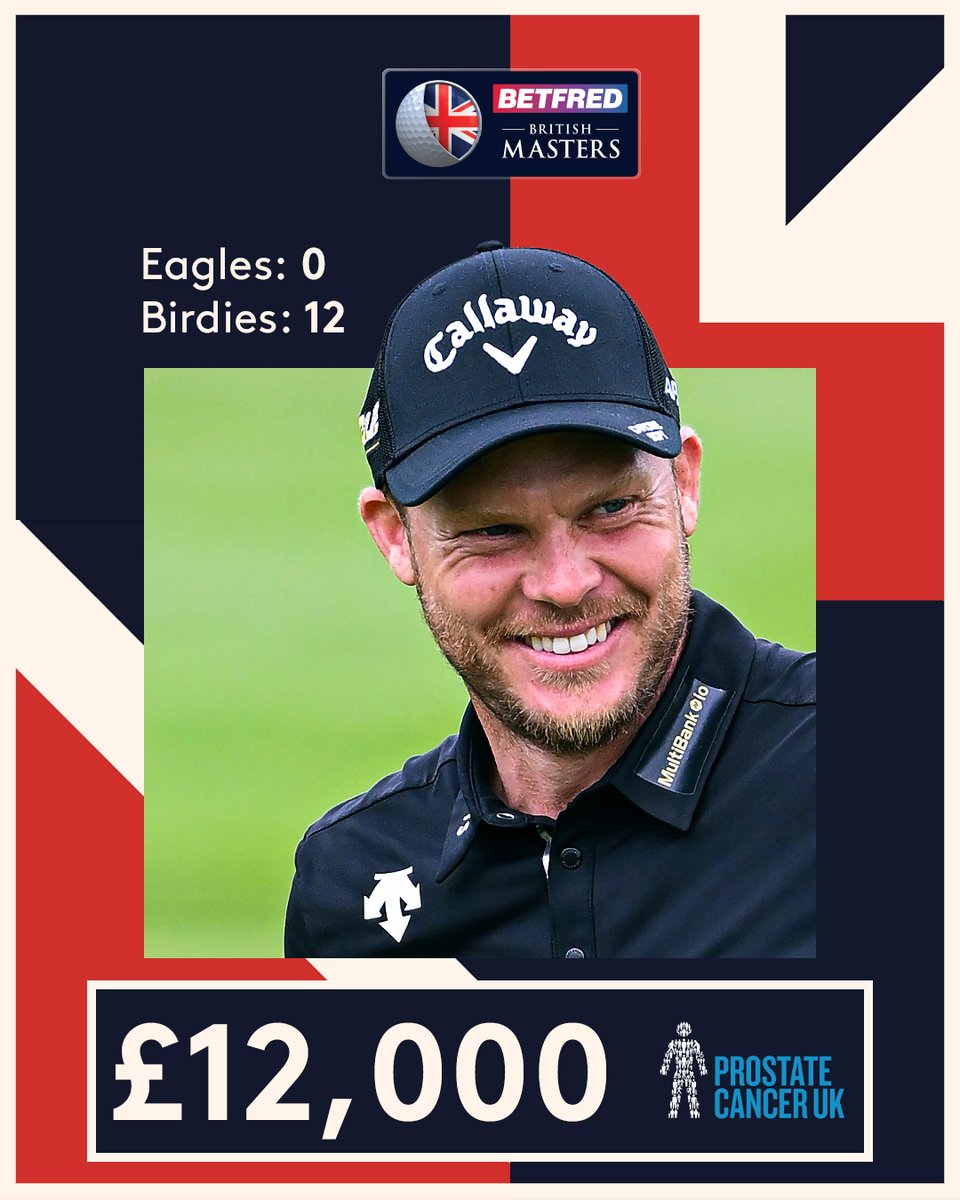 Behind them are a pack of four all heading into day three on -6, including host Danny Willett. The Englishman turned in a remarkable performance, recovering from his +1 on Thursday with a clinical second round in which he scored eight birdies to post a -7 on Friday - the best score of the day. He is joined by compatriot Marcus Armitage, Sebastian Soederberg and Justin Walters.

It has been another quiet day for last year’s champion Richard Bland, who after scoring one over par on Thursday, managed to see an improvement by finishing on par, but it won’t be enough to reclaim the title. Lee Westwood had a fairly disappointing afternoon with a double bogey on the final hole leaving him two over par after finishing one under on Thursday - it will most likely be the end of his Betfred British Masters journey. And it hasn’t quite helped his case in trying to join the Saudi-breakaway golf tour.

While there have been some flat numbers by some familiar faces at The Belfry for the second round, it is setting up an exciting contest for day three with the likes of Long, Oleson and Hoejgaard already showing consistency on the famous course, while Willett’s sensational rally after a quiet first round puts him in a great position heading into the final two days.

x
Suggested Searches:
The Sportsman
Manchester United
Liverpool
Manchester City
Premier League
More
golf
Everything You Need To Know About The 2022 PGA Championship
‘This is Major’ is the PGA’s chosen slogan for their flagship major event, as the [ ... ]
golf
Betfred Donate £19,000 To Prostate Cancer UK After Danny Willett...
Thorbjørn Olesen may have walked away with the Betfred British Masters title over the weekend, [ ... ]
golf
Betfred British Masters: Thorbjorn Olesen Triumphs With Spectacular...
Thorbjorn Olesen clinched the Betfred British Masters title with an incredible 35-foot putt on the 18th [ ... ]
golf
Thorbjorn Olesen Three Clear Heading Into Final Day Of Betfred...
Following a miserably wet Friday, the sunshine returned to The Belfry on Saturday as round three of [ ... ]
golf
Great Danes Enjoy Profitable Opening Day At Betfred British...
If watching Christian Eriksen run the show in the Premier League wasn’t enough, now several other [ ... ]
golf
Everything You Need To Know About The Betfred British Masters
The British Masters is upon us and Danny Willett has chosen The Belfry again as the host for one of [ ... ]
golf
Phil Mickelson Plays Both Sides As Golf’s Civil War Begins
Phil Mickelson, American golf hero and people’s champion left many fans flabbergasted by [ ... ]
golf
Lazarus With A Five Iron: Tiger Roars Back At The Masters On...
On April 14 2019, the weather was looming ominously in Augusta, Georgia. The only thunder that ultimately [ ... ]
golf
Scheffler Shines, Rory Reborn & Tiger Returns: 5 Things We Learned...
Scottie Scheffler's stunning season continued this weekend as he clinched the first major of his [ ... ]
golf
Tiger’s Greatest Triumphs: Three Times Woods Defied All The...
You simply couldn’t write the life of Tiger Woods. A man that has seen it all, won the lot and [ ... ]
golf
The Masters Best Picks And Tips: Can Tiger Woods Live The Dream...
Tiger Roll might’ve called it a day after Cheltenham, and Subway might’ve called time on [ ... ]
golf
25 Years On: Remembering When Tiger Woods Became The Masters’...
Way before his slams, his swings and scandals, Tiger Woods paved the way as a phenom in the world of [ ... ]
golf
Everything You Need To Know About The 2022 Masters Tournament
The famous green jacket is up for grabs once again as the golf world descends on Augusta, Georgia for [ ... ]
golf
Where? When? How To Watch? Everything You Need To Know About...
One of the highlights of the golfing calendar arrives next week in the form of the sport’s “fifth [ ... ]
golf
Five Of The Best UK Golf Courses You Can Play For Under £100
The majority of UK golf courses we see the likes of Bryson DeChambeau, Rory McIlroy and Jon [ ... ]
golf
IN PICTURES: Five Of The Most Beautiful Golf Courses In The...
Widely regarded as one of the best looking golf courses man has ever crafted, Pebble Beach in California [ ... ]
golf
Drama Surrounding Saudi Super Golf League Could Rumble On For...
Although this feels like an idea which has just been ignited, the concept of a breakaway league in golf [ ... ]
golf
Why The DP World Tour Will Help European Golf
As the PGA Tour came to a close before September’s Ryder Cup, the European Tour has entered its [ ... ]
golf
USA Complete Ryder Cup Annihilation As Cantlay And Scheffler...
The USA regained the Ryder Cup on Sunday, finishing off a convincing exhibition of matchplay golf by [ ... ]
golf
Team USA Dominate Day Two Of Ryder Cup Leaving Europe With A...
Team USA stretched their lead to 11-5 on day two of the Ryder Cup at Whistling Straits after another [ ... ]
golf
Ryder Cup Pairings 2021 Day One: Rahm And Garcia Eye Up Titanic...
The Ryder Cup pairings have delivered once again. Europe will start by sending out world number one [ ... ]
golf
Everything You Need To Know About The 2021 Ryder Cup At Whistling...
The 2021 edition of the Ryder Cup begins on Friday a whole year after its initially scheduled start [ ... ]
golf
Will Shane Lowry Make It? Europe's Ryder Cup Qualifying Race...
The Ryder Cup kicks off later this month at Whistling Straits and Europe’s men will be hoping [ ... ]
golf
Kids In America: Rookie Duo Maguire And Castren Fire Europe...
The old cliche that youth has no fear is often thrown about in sport, but we saw just how nerveless [ ... ]
golf
Cantlay, DeChambeau Or Rahm To Win? All You Need To Know On...
The PGA Tour heads to the home of some of golf’s most breathtaking courses, Atlanta, with East [ ... ]
golf
Everything You Need To Know Ahead Of The 2021 Solheim Cup
The 17th edition of the Solheim Cup, one of the most prestigious events in golf, gets underway this [ ... ]
golf
Kevin Kisner’s Wyndham Win Shows His Importance To Team USA...
Golf’s showpiece team event, the Ryder Cup, is just over a month away as Team Europe prepare to [ ... ]
golf
Golf's Sibling Superstars Minjee Lee And Min Woo Lee Are Taking...
On Sunday, Australian golfer Minjee Lee overturned a seven shot deficit to beat South Korea’s [ ... ]
golf
Unflappable Collin Morikawa Wins The Open Championship After...
American Collin Morikawa has won the Open Championship’s Claret Jug for the first time after a [ ... ]
golf
Oosthuizen Holds His Nerve To Take One-Stroke Lead Into Final...
Louis Oosthuizen proved once again that he should never be underestimated, as even with a subpar performance [ ... ]