A bullish Nick Kyrgios reckons he can beat absolutely anyone in the Wimbledon draw on his day and hopes this is where it can all finally fall into place at a slam for him – and it is young British wildcard Paul Jubb that is braced to take on the volcanic Australian in the first round this year.

The 27-year-old Kyrgios has a game made for success on grass, an impish streak that sees him throw in the odd under-arm serve and between-the-legs shot - but a fragile temperament that could hardly be less suited to the mental demands of winning seven straight matches over two weeks to get his hands on a grand slam trophy.

The brilliance and natural talent are there for all to see. Kyrgios quite simply can play shots others would not attempt, or even dream up. But alongside that there is the explosive and anti-establishment streak that regularly sees him clash with umpires and other officials, and there have been fines aplenty and past examples of failing to give his best on a court.

Currently, with just one slam quarter-final appearance apiece at Wimbledon and his home Australian Open, world No45 Kyrgios is less flawed genius and more flawed nearly-man – not quite as exotic a brand concept.

But after giving the clay-court swing a swerve Kyrgios has made very good use of the grass-court season, reaching two semi-finals in Germany, and beating the likes of Stefanos Tsitsipas and only losing to an inspired Andy Murray in Stuttgart.

Kyrgios said: “For me, I just know if I'm serving well and I'm playing well, I can beat anyone. I have pretty much beaten everyone in the draw before.

“And for the slams you need good sleep, and good rest - I think that's one. Make sure your body's in good nick. It's hard. It's like not many people have gotten over the hump of winning a slam. I'm one of the people that has to deal with that every week. Like, ‘oh, he's probably one of the biggest wastes of talent. He should be winning a slam’.

“Not many people have actually gotten over that hump in singles. It's obviously something I want to get over, and hopefully one day.

“I know from a confidence standpoint, I'm never low on that. I've had some good runs here at Wimbledon, at the Australian Open. I've always run into someone that's pretty much in their prime. I played Murray here in the fourth round when he won the final 4-4-4. He was in his prime. My draw was ridiculously tough even to get there.

“I think honestly the best chance I ever had to win a slam was in 2014 when I made the quarterfinals. I had Milos Raonic in the quarter-finals, up a set and a break. That's as close as I've been.

“I think I need to focus on the earlier rounds, make sure I get it done as quick as possible. I'm not even thinking about winning it or anything at the moment. I got another couple days to just practice and feel good, then we'll see what happens.

“I am probably the only player that's going to have a two-month break in the middle of the year, then come back for the grass. I've played a lot of matches, had some great results, beaten some really good players. I'm just happy where my level is at. I think I've had probably some of the best preparation I've had for a while on the grass.” 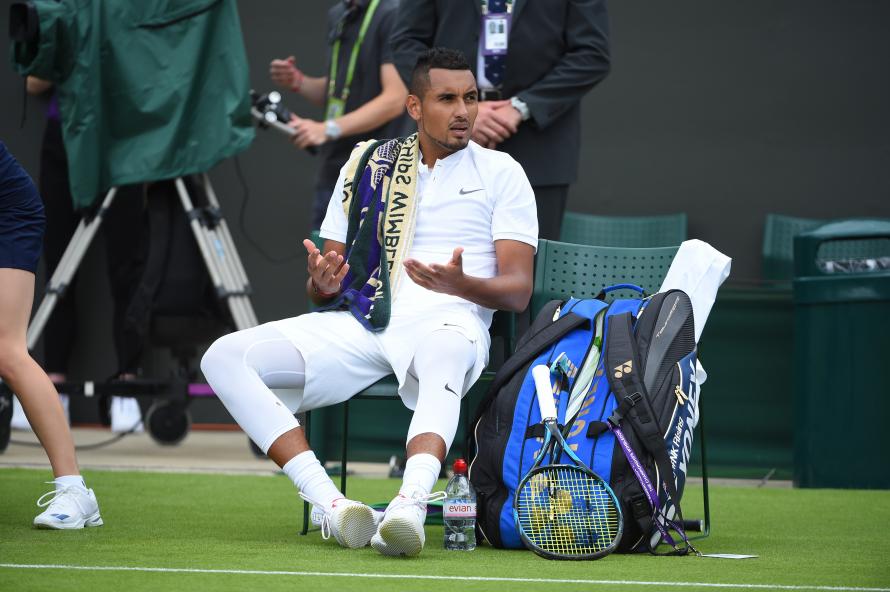 At least Kyrgios will be facing a fan in the 22-year-old Jubb from Hull – and even if he throws a couple of the underarm serves they are more likely to elicit a smirk than complaints from his opponent.

World No219 Jubb said: “He is a showman and people watch him, so I wouldn’t say it is a bad thing how he brings a lot of excitement. I would turn on the TV to watch him, and have definitely watched his matches in the past. He is definitely entertaining to watch.

“And I have never been against an under-arm serve, it’s not against the rules. If someone is too far back, do it. I have never understood why people complain about that sort of thing so if he does it to me and it works, I’ll probably laugh. I am a fan of it, really. I have done a few in practice, never in matches – but there’s always a first time. How would he react if I did a few back? I guess we’ll have to wait and see!

“I have just got to play the match like normal, like I would go about any other match. Let him do his thing, and I need to try and be consistent and not go away from what I normally try and do. And I’d like to think I can do that against Nick. It is a different occasion maybe to normal, but it is important for me to stick to what is normal.

“I hope to improve from last time I played here and perform a little bit better, I wasn’t really happy with the way I played at Wimbledon in 2019 with the wildcard. Experience is a thing you can’t buy and you have to go through it a few times to perfect things and get better.”