Cricket
News
England's highest ever wicket taker spoke to The Sportsman about the Ashes and more
Simon Lillicrap
07:33, 02 Jun 2021

Whisky. Fine wine. Jimmy Anderson. Just three things that get better with age. England’s highest ever wicket taker will turn 39 this summer, but age shows no sign of slowing Anderson down.

“I feel like I have definitely got better with age,” he told The Sportsman at the launch of cinch's partnership with England Cricket. “Certainly I think the last five years have been my best and I still feel like I can improve as well. I still turn up every day to training and try and improve. I think with all sportspeople, you have so much experience to fall back on and you get to a certain age and you feel like you have gone through everything emotion, you've experienced every possible outcome of the game. If you find yourself in a certain situation, you have generally been there before, so you can cope with it a bit better. I feel like I'm there at the moment so I feel like I can still improve even more.”

It isn’t just Anderson who is enjoying a fruitful Indian summer of his career. This year, Phil Mickelson became the oldest major winner in history at 50, while the likes of Cristiano Ronado and Roger Federer are still at the very top of their sports in their late 30s.

“I think there is just a perception, certainly in this country that once you get to a certain age you've got to start slowing down, especially in sport,” Anderson explains. “There's been such an advancement in sports science and the ability to stay fit to stay healthy and just prolong your career and you are seeing it all around the world, you mentioned Mickelson, seeing Tom Brady win the Super Bowl at 43. Federer is still going at 39, there are a lot of examples of people going on for longer. 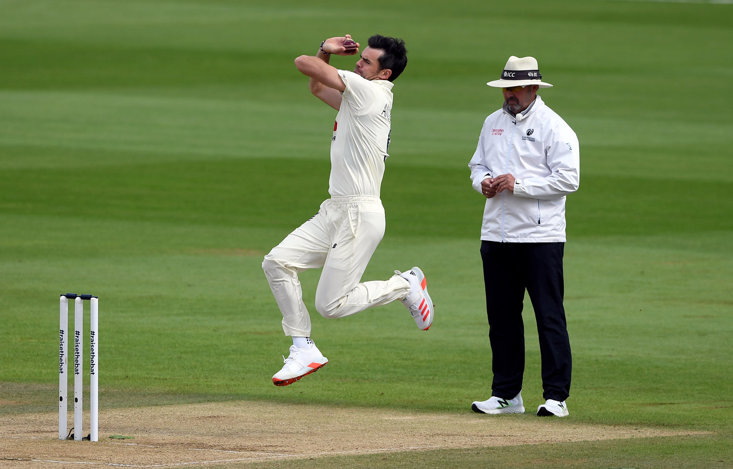 ANDERSON GETS READY TO BOWL ONE OF HIS FEARSOME DELIVERIES

England have an absolutely packed schedule in 2021, with a two-match Test series against New Zealand, and T20 and ODI series against India and Sri Lanka to come before the Ashes begin in December.

“It is always a huge challenge going to Australia, I don't think it is going to be any easier than it ever has been to be honest. We know that we have got a big summer ahead of us now to try and get in some sort of form and get some momentum and some wins to try and make sure we are going to Australia in a really good place.

“You need to be confident as a team going there, you can't be unsure about what is your best team or unsure about any part of the squad you have got to have the players that you know can do the job and we've got a few months to be able to do that as a team.”

The man who will lead the England side on their quest to win the Ashes down under for the first time since 2011, a side Anderson also played in, is captain Joe Root. “He has really grown as a captain over the last few years. Certainly on the field, tactically, he is really, really good. He is great for me as a bowler to talk to and share ideas with,” Anderson added.

“I think he has really put his stamp on the team, he knows how he wants his team to play and how we are going to go about winning games of cricket. We try to go out there and implement his plans on the field. I think the biggest thing for me is the way he leads by example. He is the first one in the nets and the last one out. He is still one of the best batsmen in the world so we are very lucky to have him.” 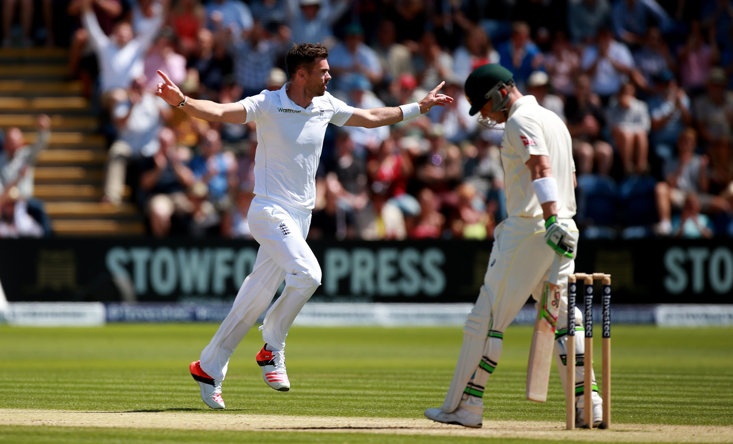 ANDERSON GETS YET ANOTHER WICKET

One man who has been playing alongside Anderson for the past 15 years is fellow fast bowler Stuart Broad and although they have not played as much together recently, the pair still share a close bond on and off the field.

“We are definitely [still] learning from each other, we talk a lot even away from cricket we talk most days whether it is about cricket or whatever really - general chat. We talk a lot about how we can get better or improve and we know the game so well that we can certainly help each other a lot on the field and in the nets.

“I think that has helped us be a good partnership. We don't play too much together anymore, which is a shame, because I'd like to think if England picked their best team that we would both be in it still. We are just going to have to hope that over the next few months that is going to be the case and we can play a few more games together.”

So will this be Anderson’s last ever Ashes series?

“I'm not sure to be honest,” he smiled. “I was gutted to miss the 2019 one with injury, it would be nice to play in another one at home. It is one of those things, I don't know what is going to happen, at the moment I feel great, fit and healthy, feel like I'm bowling as well as I ever have. So as long as that is the case, then I'll just keep going.

“As long as I can hold my place in the team, and my skills don't drop off, then I'll try and keep helping the team win and that's all I really care about.”

England cricketer Jimmy Anderson partnered with cinch, England cricket’s new principal partner to help Ramsbottom CC take on the pro’s in the ultimate faff-free match. And the results were hilarious! Follow @cinchUK and keep an eye out for the full video coming out on 10th May. cinch takes the faff out of buying a car with quality checked used cars delivered direct to the buyer’s door wherever they are across mainland UK, and a 14-day money-back guarantee.

x
Suggested Searches:
Manchester United
Liverpool
Manchester City
Marcus Rashford
Premier League
More
cricket
ECB Right To Suspend Ollie Robinson As Cricket Looks To Learn...
Culture Secretary Oliver Dowden joined a number of outspoken critics of the ECB’s suspension of [ ... ]
cricket
New Zealand Bring Desire, England Are Just Dire As First Test...
When New Zealand could have batted for a draw, they went hell for leather on the final day at Lord’s. [ ... ]
cricket
World's Best Cricketer Ben Stokes Has Become England's Imperfect...
If there is one thing the British public love more than an underdog story, it is a tale of redemption. [ ... ]
cricket
England Just Fall Short Against India Despite Sam Curran Heroics...
England came up short against India, losing by just seven runs in an absolutely thrilling ODI decider [ ... ]
cricket
England’s Aggressive Batting Pays Off As Bairstow And Stokes...
When England’s top three bat like this, there is simply no side in the world that can stop them. [ ... ]
cricket
Three Years On, Steve Smith Deserves Big Praise For His Response...
On this day three years ago the entire sporting world collapsed on Steve Smith’s shoulders. In [ ... ]
cricket
Root's Calm Head Missed As England Collapse To 66-Run ODI Loss...
India have defeated England by 66 runs in the first one-day international in a game that will once again [ ... ]
cricket
India T20 Win Over England Could Be Perfect Precursor To 2021...
England have lost the T20 series in India 3-2 having been comprehensively beaten in the final match. [ ... ]
cricket
Blistering Buttler Leads England To Bounce-Back T20 Win Over...
England showed their resilient side on Tuesday as they bounced back from Sunday’s defeat in the [ ... ]
cricket
Kohli Takes Centre Stage As England Come Up Short Against India...
England came up short in the second T20I match v India, losing by seven wickets as Virat Kohli proved [ ... ]
cricket
Archer And Roy Star As England Sweep India Aside In Opening...
England began Twenty20 World Cup year in emphatic fashion as they hammered India by eight wickets in [ ... ]
cricket
Weather No Excuse, England Must Learn From Woeful Batting Performance...
How quickly things can change. England’s 227 run win in the First Test v India feels like a lifetime [ ... ]
cricket
Why A Massive Fourth Test Against India Could Define England's...
England’s whole year might well ride on the outcome of Thursday’s Fourth Test against India. [ ... ]
cricket
Brittle England Beaten Inside Two Days As India Survive The...
It was one of the most chaotic days of Test cricket ever but by shortly after tea on day two in Ahmedabad [ ... ]
cricket
Sidebottom Wants To See Both Broad And Anderson Play Third Test...
Former England bowler Ryan Sidebottom says England ought to select both Stuart Broad and Jimmy Anderson [ ... ]
cricket
The Hundred Can Help Revolutionise Women’s Cricket And Inspire...
The long-awaited The Hundred competition is set to revolutionise cricket and will finally kick off this [ ... ]
cricket
Should Test Cricket Lose The Toss After India's Battering Of...
England have nobody to blame but themselves for the manner of their 317-run mauling at the hands of [ ... ]
cricket
Sidebottom Hails ''Fantastic'' Root And ''Stunning'' Anderson...
Ryan Sidebottom has heaped praise on both Jimmy Anderson and captain Joe Root following England’s [ ... ]
cricket
Fantastic Jimmy Anderson Wraps Up A Statement England Win In...
England wrapped up a dominant First Test win over India on Tuesday, with Jimmy Anderson collecting three [ ... ]
cricket
100 Up! Joe Root's Timely Form Could Be The Difference For England...
He is the baby-faced batsman who slotted into England’s line-up in India in 2012-13 and immediately [ ... ]
cricket
Tailenders Is The Easy-Listening Pod That Takes An Alternative...
At the moment, we’re all enamoured with cricket, thanks to India digging in and out-saucing the [ ... ]
cricket
The New Book Shining A Light On The Biggest Scandal In Cricket...
It has been nine years since the News of the World ceased publication. Nine years. Doesn’t time [ ... ]
cricket
How Botham And England Revived The Spirits Of A Nation At The...
In the summer of 1981 a combination of spiralling unemployment and racial tension had led to riots in [ ... ]
cricket
Ben Stokes Inspires England Victory In Five-Day Test Classic
This was five-day test match cricket at its finest. Ben Stokes took the final three wickets on Tuesday [ ... ]
cricket
Batting Legend Tendulkar Warns ICC Five-Day Tests ''Should Not...
If you’re looking for a cricket batting record, odds on Sachin Tendulkar probably owns it. The [ ... ]
cricket
England Head To South Africa Test In Search Of Answers And A...
England end a historic 2019 by taking on South Africa in the First Test in Centurion this week. But [ ... ]
cricket
England World Cup Winner Moeen Ali's Conscious Uncoupling From...
“I just want to get that buzz back”. England’s Moeen Ali has continued to put [ ... ]
cricket
England Fail To Win A Test Series In A Calendar Year For First...
England have lost another Test series in 2019, which brings to a close a difficult 12 months that has [ ... ]
cricket
Joe Root Double Century Gives England A Glimmer Of Hope Against...
Joe Root hit a stunning double century to give England a slight hope of victory against New Zealand [ ... ]
cricket
Pope Steps Up After Baffling Selection Leaves England Short...
It is ever difficult to predict exactly what will unfold when England go on tour. Ollie Pope, a man [ ... ]