Youtube sensations KSI and Logan Paul will go head-to-head in the ring once again after their controversial draw last year in Manchester. This time, having seen the success of the first fight, promoter Eddie Hearn has got involved and put together a stacked undercard featuring several world-class boxers. One of those is defending WBO super-middleweight world champion Billy Joe Saunders, who caught up with The Sportsman to give his views on the fight.

When asked whether he should be headlining on fight night he exclusively told The Sportsman: “I didn’t even know who the other two guys were until I had a look. But it doesn’t really bother me because you get some headliners and some top of the bills for some shows, then you get someone on the undercard come through and completely steal the show.

“I’m not a big believer in someone saying: ‘You’re top of the bill’, as long as everyone has got a good time slot, that’s all I’m worried about and winning, defending my title.” 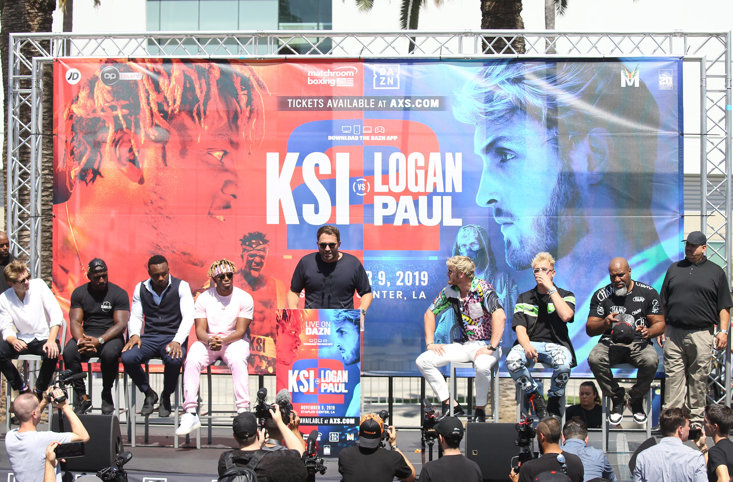 The first fight between the two YouTubers, who have a combined following of 40 million on the platform, generated over one million pay-per-view buys along with over 75 million views online, post-fight. This sort of audience is something Saunders is looking forward to: “You know I think that any exposure even after that is phenomenal, especially for someone like myself debuting on DAZN and debuting in America, to have that sort of attraction around you I mean you’ve got to grab it with both hands and I'm quite looking forward to the bill to be fair.

“You know it’s getting a lot of criticism on social media and other networks but for me, I’m just looking forward to performing in front of the big crowd, the big audience and the TV cameras.”

The first press conference drew criticism online after some childish behaviour on stage, but the world champion praised the pair for the profile they have created for themselves:

“You can see that the two guys haven’t got the fighter's mentality, they haven't got the fighter’s bravado, they don’t really know how to come across as fighters because they are not.

“But what they are is clever and intelligent businessmen, they are looking at it as a bit of WWF the way they are going at it, but they’ve put themselves in this position, no one's giving them a helping hand and they are grabbing it with both hands.

I personally give them a pat on the back, fair play to them. 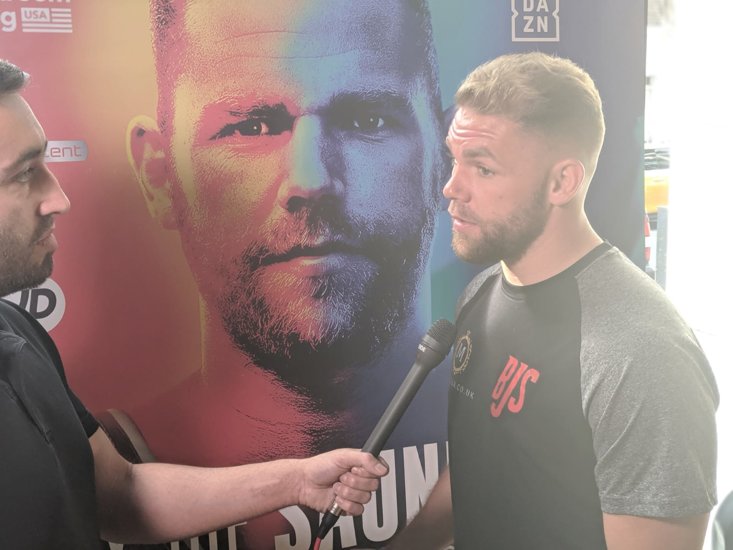 The first fight may have drawn a massive audience, but the 30-year-old was not one of them:

“I haven't seen them fight, I didn't watch the first fight but from the sounds of everybody they can fire a dig or two.

“They’ve obviously built their profile in the right way. They’ve got a great following, a great fanbase, I think a lot of fighters should take a leaf out of their book because if a good fighter can get that sort of fanbase then he has cracked it.”

The bout at the Staples Center will be shown live on DAZN, and the stacked undercard of professional fighters is sure to entice boxing fans:

“Obviously, Eddie has put these on to attract non-boxing fans, but he has also put a good undercard on to make you go ‘Ooh’. There’s something for your boxing fans to watch, in the UK and in America.”

The ninth of November is the date for your diary, where Billy Joe Saunders will defend his title against an as-of-yet unnamed opponent and two of the biggest online celebrities do battle once again.

This time around both fighters have turned professional, meaning that unlike in the first fight, there are no head-guards and 10oz gloves, which should make for an entertaining bout. 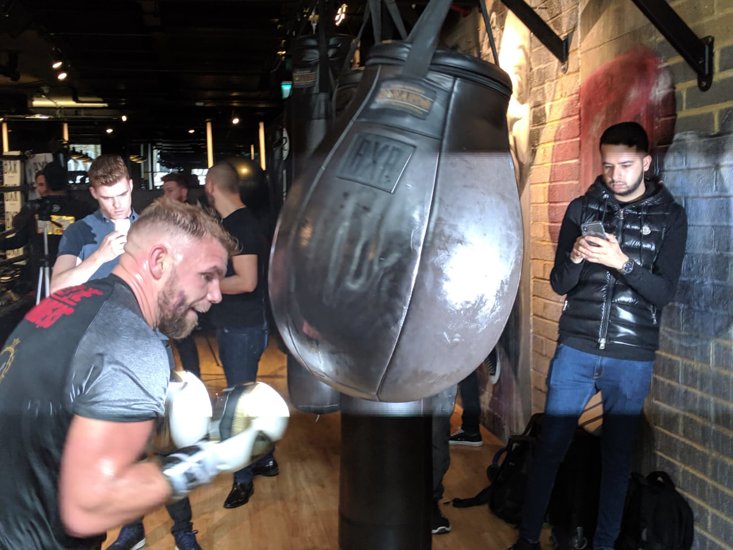 More
boxing
Taylor Gets Persoon Rematch And Four More Boxing Stories You...
From highly-anticipated rematches to generous gestures, here’s your round up of five of the week’s [ ... ]
boxing
WBC Orders Campbell Vs Garcia And Four More Boxing Stories You...
From boxing biopics to glove tampering allegations, here are five boxing stories you might have missed [ ... ]
boxing
Katie Taylor Vs Amanda Serrano And Four More Boxing Stories...
From quarrelling managers and promoters, to more members of boxing’s royalty clamouring to return [ ... ]
boxing
Whyte Sues And Usyk Stands Firm In Another Bonkers Week Of Boxing...
The world of boxing has been as tumultuous as ever this week with the potential heavyweight clash between [ ... ]
boxing
Mike Tyson: From Bullied Pigeon Enthusiast To The Baddest Man...
Like no other sport, boxing has provided sanctuary and a future for countless lost souls for more than [ ... ]
boxing
Lennox Lewis, Mike Tyson And The Craziest Boxing Press Conference...
”I’m no Mother Teresa... I’m not Charles Manson either.” - Mike Tyson On June [ ... ]
boxing
AJ Vs Fury Gets Closer And Four More Boxing Stories You May...
Coronavirus may have played havoc with the 2020 boxing calendar for the foreseeable future but that [ ... ]
boxing
Dillian Whyte, The UFC And Four Other Boxing Stories You Might...
Coronavirus may have played havoc with the 2020 boxing calendar for the foreseeable future but that [ ... ]
boxing
Eyes On The Prize: What We Know About Iron Mike Tyson’s Boxing...
The sporting world has been caught up in Mike Tyson fever since the former world heavyweight champion, [ ... ]
boxing
Tyson Fury Wants To Help You Transform Your Mind And Body With...
WBC heavyweight world champion Tyson Fury will be sharing his secrets for staying in fighting-fit shape, [ ... ]
boxing
UFC President Dana White Urges Mike Tyson To Reconsider Ring...
UFC chief Dana White has urged his close friend Mike Tyson to reconsider a return to boxing at the age [ ... ]
boxing
Holyfield's Ring Return And Four Other Boxing Stories You Might...
Coronavirus may have played havoc with the 2020 boxing calendar for the foreseeable future but that [ ... ]
boxing
No Spit Buckets And No Fans Among BBBofC Proposals To Bring...
Boxers will have to walk to the ring in protective masks and without their trusty spit buckets if the [ ... ]
boxing
Mayweather vs Pacquiao: Five Years On From A Fight That Was...
In an ideal world, we would be celebrating the tenth, maybe even eleventh anniversary of Floyd Mayweather [ ... ]
boxing
Iron Mike’s Return And Four Other Boxing Stories You Might Have...
Coronavirus may have played havoc with the 2020 boxing calendar for the foreseeable future but that [ ... ]
boxing
How Hearn's Virtual Press Conference Dream Reignited Froch's...
When promoter Eddie Hearn declared that Joe Calzaghe and Carl Froch topped his list of the dream boxers [ ... ]
boxing
Joseph Parker's Popularity Skyrockets And Tyson Fury Is Partly...
Few boxers have seen their stock rise so highly without having set in foot in the ring as former WBO [ ... ]
boxing
At 48, Shannon Briggs Follows Paulie Malignaggi Into Bare Knuckle...
In the least surprising story of 2020, two-time heavyweight boxing world champion Shannon Briggs has [ ... ]
boxing
Looking Back At Amir Khan's Five Best Performances As Retirement...
Amir Khan’s 16-year professional career may be nearing its conclusion but the 33-year-old is adamant [ ... ]
boxing
George Foreman Says Deontay Wilder Will Beat Tyson Fury And...
Former two-time world heavyweight champion George Foreman has stepped in to give Deontay Wilder some [ ... ]
boxing
Fight Fans Rejoice! Canelo And Golovkin In Talks For September...
Mexican superstar Saul ‘Canelo’ Alvarez and Kazakhstan’s tough-as-nails Gennady Golovkin [ ... ]
boxing
Usyk Aiming To Be The Spanner In The Works For Potential Fury...
Oleksandr Usyk is the man looking to ruin the biggest fight in British boxing history and scupper any [ ... ]
boxing
After Defeat To Tyson Fury, Deontay Wilder's Aura Of Invincibility...
Former Mike Tyson trainer Teddy Atlas has compared Deontay Wilder to a ‘spoilt brat’ insisting [ ... ]
boxing
Dereck Chisora Sees A Big Mountain To Climb Against ''Boy’s...
Amongst the headlines of Corona-this and Corona-that, you might have missed the announcement of a blockbuster [ ... ]
boxing
Usyk, The Ultimate Road Warrior, Will Relish Fighting Chisora...
The supremely-gifted Oleksandr Usyk will visit these shores once more as he looks to defend his unbeaten [ ... ]
boxing
Former US Marine Stands In The Way Of Frampton Becoming Three-Weight...
Carl Frampton is looking to become a three-weight world champion this summer as a fight with WBO [ ... ]
boxing
Jono Carroll Promises To Break Scott Quigg's Heart Ahead Of...
This weekend, the Manchester Arena will welcome a tasty super-featherweight clash between [ ... ]
boxing
Taylor Set For ''Biggest Female Fight Ever'' Against Seven-Weight...
Katie Taylor’s fight with Amanda Serrano has been billed as "the biggest female fight of [ ... ]
boxing
''If It Makes Money, It Makes Sense'' - Floyd Wants $600m To...
Floyd Mayweather has insisted it will take a whopping $600m to get him back in the ring to fight Conor [ ... ]
boxing
Tyson Fury And Anthony Joshua All Set For Cardiff In December,...
It’s the fight we all want and it may have taken a giant step closer to happening after Eddie [ ... ]
This website uses cookies
Cookies help us and our partners provide statistics. By browsing this website, you consent to the use of cookies in accordance with our Privacy Policy and Cookies Policy.
Accept & Close