Emma Raducanu believes that the setbacks and hurdles she has had to face since sensationally winning the US Open as a teenager last year have required her to dig very deep into reserves of resilience that should serve her very well over a career in tennis.

Raducanu, now 19 and the British No1, saw her life changed beyond all recognition after upsetting all the odds and coming from almost nowhere to win a first grand slam tournament in New York. Even for one so composed and self-assured, the whirlwind of celebrity and commercial endorsement offers worth tens of millions flooding in must have left a youngster still with tour L-plates on dizzy.

No one can plan exactly how or when such a major breakthrough will occur, and for many it never does. Raducanu not only won it without dropping a set, but became the first qualifier man or woman to win a slam in the Open era. However in the months since it has been far from a bed of roses for Raducanu as she looks to continue to develop both her game, and her conditioning and fitness.

She decided to part ways with Andrew Richardson, the coach with her on that New York journey. And after only five months another coach, Torben Beltz, was let go. Then there have been the frustrating series of injuries and withdrawals, the most recent coming in Nottingham where she picked up a side strain that threatened her participation in London.

Even over the last week it has looked touch and go at times whether she would play at a first Wimbledon since that US Open win – and after a fine run to the fourth round last year there is an SW19 disappointment to erase from the memory banks after Raducanu had to withdraw against Ajla Tomaljanovic experiencing breathing difficulties and sickness.

Raducanu is clearly set to play her first-round match against Belgian Alison van Uytvanck - certainly a tough challenge against a good grass-court performer - though was less than fulsome in answers to questions about the precise state of her fitness and physical health.

However on her year’s journey, she said: “I'd say I've learnt that I'm resilient. I always knew that, that I had that, but just to keep getting back up. I say fall down 10 times, get up 11. What are you going to do about it? All you can do is keep moving forward. There's no point looking back, getting down, because you just keep getting back up.

“I'm not sort of playing for anyone; just to go out there and play for myself. The tests that I've kind of gone through I think are going to help me as a person and a player long-term. To experience it so young, I feel like I'm lucky that I get this lesson at such an early age, so I have a lot of time to get better at it. 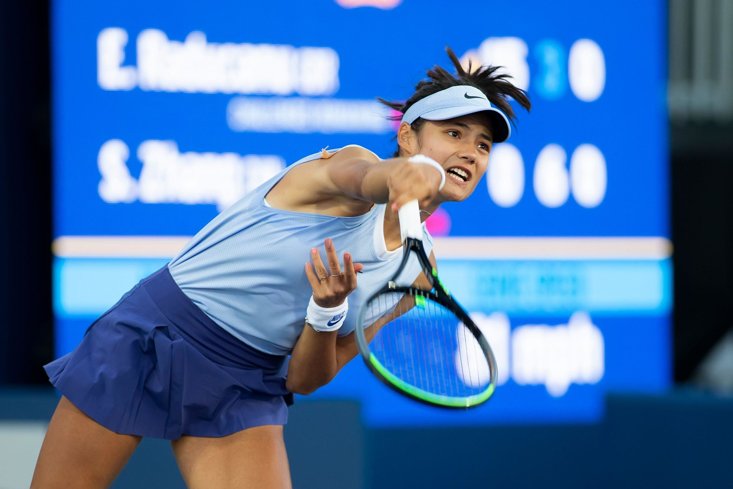 “As a tennis player I have actually grown and developed and have skills that I maybe didn't have last year. But everyone knows me now. Everyone knows the sort of things I was doing last year. Everyone wants to beat me. I sort of take that as a compliment if players are raising their game against me because they want to do well against you. And if they do that, I have to raise my level, too.

“Over time I will be a better tennis player. I'm 19 years old. If I hadn't won the US Open, I think the past year or the way that I've been sort of heading, it wouldn't be necessarily a bad thing, or results-wise. I think I still have hopefully 15 years or something more in my career to go. I'm just at the beginning of it. So, yeah, I'm looking forward for this long-term journey.

“I've definitely been managing the side since Nottingham. I took two weeks off. But, yeah, I've been preparing this week. On Friday we just had to react to the situation. I already practiced in the morning. So collectively thought it was the best decision was to pass on the afternoon practice session and stay fresh and ready to go.

“Right now, I'm fit. I'm ready to go. I'm looking forward to it. That's it. There were moments earlier on in the week we weren't really sure. We were sort of going to see how the week goes. But it went pretty well. And now it's full steam ahead.”

Raducanu is also delighted to be back in the All England Club surroundings and is scheduled second on Centre Court on Monday. She added: “I think it's amazing. This year I get such a special feeling walking around the grounds. I definitely feel that people are behind me. Even from some of the people working on the tournament, they're like, ‘You got this’. Just cheering me on - that's pretty special in itself.

“One of the perks now is I don't need to cross the road at Aorangi to practice on like Court 28 or something. Last year I came straight out of my exams, I was fresh, ready to play. And I feel the same excitement this year, to be honest, because I think Wimbledon just brings that out of me especially.

But I'm definitely looking forward to it. I am just going to play like a kid who just loves playing tennis. It's always my dream to step out on Centre Court. It's something I've always wanted to do and started playing tennis for.”