The story of Umbro is currently being told - in shirt form - in its home city of Manchester. A brand forever linked with football in this country celebrates its 95th birthday this year, a perfect time to remember the impact and influence of the double diamond through the years.

The last couple of years have seen something of an explosion in the celebration of football shirts as art.

The Neal Heard-curated Art of the Football Shirt exhibition in London was staged in 2017 and went on to tour a number of cities, while Classic Football Shirts - the go-to website for retro jerseys - also took the chance to show off some choice selections from their archives in Manchester, New York and Moscow with the Fabric of Football expo.

The thirst for retro shirts shows no sign of slowing down. Last summer’s World Cup in Russia saw many teams wearing shirts which were fresh twists on classic designs. When once an old shirt would be derided for being out of date, now it is celebrated as some kind of badge of honour.

Events such as this in Manchester, staged by Classic Football Shirts and Mundial, give fans the chance to reminisce and allow themselves to be intoxicated by nostalgia. They also give us the chance to accept we may have got some things wrong too. Goalkeeper shirts which at the time were derided as looking like a tube of Refreshers are now held up as design classics and sell for hundreds of pounds. If only I’d paid more attention to those sale rails in Olympus Sports.

Kit nerds like me will always have a soft spot for Umbro. If you’re a 40-something football fan, your first replica kit may well have been made by Umbro and if you were really lucky it came in a Replikit box complete with socks and shorts. 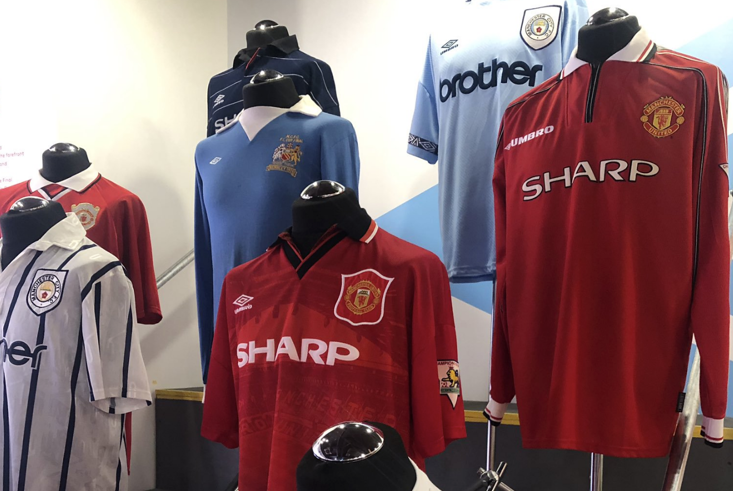 Umbro’s own story starts with humble beginnings, trading from a pub in Mobberley before moving into a warehouse in Wilmslow.

The firm was soon supplying most teams with kit though there was no sign of the famous double diamond logo until the 1970s. Umbro also signed an endorsement deal with an up-and-coming Scottish lad called Denis Law as they were quick to spot the power of celebrity.

Despite not having their logo on show, Umbro enjoyed huge success through the 1960s. Not only did they supply both Manchester United and Celtic as they claimed European Cups they produced the England kit worn during the triumphant World Cup campaign of 1966.

Through rapid changes in fabric technology, the designs of the 1970s became altogether more colourful and saw the incorporation of club badges and logos onto shirts. In an increasingly crowded marketplace with the likes of Admiral and adidas battling to add more clubs to their stables, Umbro continued to prosper, supplying the majority of English clubs and winning back the contract to supply the national team ahead of the 1986 World Cup in Mexico.

When the sportswear as fashion movement of the 1980s gathered pace, sportswear firms were able to diversify into training gear, tracksuits and leisure wear. They may not have had the cache of adidas, Ellesse, Kappa or Lacoste but their unbreakable connection with football made them utterly endearing.

One of the biggest coups for Umbro was winning the contract to supply Manchester United after many years with adidas. This coincided with the most successful period in the club’s history and provided many of the most celebrated shirt designs of all time such as the green and yellow halved Newton Heath inspired away kit and the black Sharp Viewcam design immortalized by Eric Cantona kung-fu-kicking a Crystal Palace fan in the crowd.

As a long-time supplier of Manchester City, the brand got a further boost from the success of Oasis in the 1990s as they were frequently snapped wearing Umbro gear. Liam Gallagher famously wore an Umbro training top when the band played their unforgettable gigs at Maine Road.

This further elevated the brand into part of the pop culture and when the European Championships “came home” to England in 1996, you literally couldn’t walk down a street without seeing Umbro gear.

Changes in ownership and the loss of some major contracts saw the brand fall off the radar and the likes of mega brands like Nike, adidas, Puma and Under Armour dominated the landscape. Nike bought Umbro in 2007 - and later took over the supply of the English team - but in 2012 the brand was sold to Iconix Brand Group.

Umbro have enjoyed something of a resurgence in recent years under their new owners and have once again become a familiar sight in the Premier League with partnerships forged with Everton, West Ham and Bournemouth. They also have contracts with Hull, Derby County, Blackburn Rovers and Schalke.

Making use of the company’s rich back catalogue, the brand has collaborated with other designers including Patta and released modern twists on some of its best-loved designs.

Throughout this, the company has never shied away from its Manchester roots and the current exhibition celebrates its rich heritage. A huge mural has also been created in the city’s Northern Quarter, featuring slogans and designs which tie it to Manchester.

Visitors to the pop-up exhibition can admire a selection of shirts, training gear and tracksuits from the company’s history as well as being able to view archive brochures and photographs.

Umbro
@umbro
Over the last few weeks, we asked Mancunians “What does football mean to you?”. From hundreds of responses, a final 11 were selected and featured on a 10-meter high mural on the edge of the city's Northern Quarter. Manchester, this is what football means to you.
#UmbroManchester
56
146
More
football
Five Premier League New Boys That Are Set To Take Next Season...
A swift summer transfer window is on the cards, with just 48 days between Premier League seasons due [ ... ]
football
Bobby Robson And The Most Glittering Chapter In Ipswich Town’s...
Few in Ipswich could have predicted what was to come when Bobby Robson replaced Bill McGarry at the [ ... ]
football
How Tearing Down The Twin Towers Destroyed The Magic Of Wembley
On July 26, 1998, plans for a new Wembley were revealed to the world, promising a national stadium [ ... ]
football
Here's To The 2019/20 Premier League Season: Five Moments That...
It all began on August 9, 2019. 353 days later, a fortnight shy of a full entire year, the 28th Premier [ ... ]
football
Why Figo To Madrid Is Still Football's Most Controversial Transfer...
We’ve had Neymar, Sol Campbell and Carlos Tevez but on this day in 2000, Luis Figo completed the [ ... ]
football
Remembering Laurie Cunningham: The Football Pioneer Whose Legacy...
In 2016 the English Heritage scheme erected a blue plaque in Stroud Green, North London to celebrate [ ... ]
football
Book Review - King Eric: Portrait Of The Artist Who Changed...
Leeds. Irwin. £1million. Title. Double. Palace. Kick. Ban. Seagulls. Return. Liverpool. Double. [ ... ]
football
Replacing Rapinoe And Morgan? The Ladies Who Can Light Up The...
Write off 2020. The best thing about it is remembering how good 2019 actually was. One of the undeniable [ ... ]
football
Wembley Woe: When England Lost To Germany At Euro ‘96
In the summer of 1990 England tasted their first ever penalty shootout heartbreak when they went out [ ... ]
football
Get Ready For A Nostalgia-Fest With Italia '90 Podcast Vincerà!
Hosted by Mark Godfrey and running from June 8th to July 8th, Vincerà! is a 24-part podcast series [ ... ]
football
Harry's Heroes, Vinnie Jones And Revenge At The Battle Of San...
When Vinnie Jones started crunching San Marino players left, right and centre, it was clear the friendly [ ... ]
football
Prodigal Talent Of The German Game Is Turning RB Leipzig Into...
This article first appeared in The Sportsman on 07/12/19 What were you doing at the age of 28? If it [ ... ]
football
''I Was Really Wasted'': When Jurgen Klopp Woke Up Hungover...
This article first appeared in The Sportsman on 05/09/19 Anyone watching the Amazon Prime documentary [ ... ]
football
Book Review - Yer Joking Aren't Ya?: The Story Of Middlesbrough's...
In 1997, Middlesbrough Football Club reached the finals of both the League and FA Cup, had the might [ ... ]
football
Carragher's Brilliant Podcast Shows The Greatest Games Are The...
What’s the greatest football game you’ve ever seen?  Jamie Carragher doesn’t [ ... ]
football
Red Bull And The Football Training Centre Of The Future... Today!
It is now 33 years since Red Bull sold its first ever energy drink. Pre-April Fool’s Day 1987 [ ... ]
football
On This Day Messi's Barcelona Tally Hits 500 In El Clásico Triumph
If you’re going to hit a milestone, and one that no one in your club’s illustrious history [ ... ]
football
The Secret Behind The Success Of Lineker, Shearer And Wright's...
The unavoidable hiatus to the broadcast of the BBC’s flagship football programme will not deny [ ... ]
football
Neymar Jr... Junior! Santos Like The Look Of Ronaldo-Imitating...
On March 7 2009, a slightly-built 17-year-old from Mogi das Cruzes, São Paulo, walked out onto [ ... ]
football
Business As Usual: A Beginners Guide To The Belarus Premier...
If you’re going out of your mind without your football fix, well we’re sorry you just haven’t [ ... ]
football
Why June 30 Could Be D-Day For The Fate Of Premier League Season
England captain Harry Kane has added his voice to the growing calls for the Premier League season to [ ... ]
football
You Heard It Here First - Brescia's Sandro Tonali Is Italy's...
Since winning the World Cup in 2006, it has been turbulent time on the international stage for Italy. [ ... ]
football
A Reunion With Ancelotti Could Resurrect Rodriguez's Stuttering...
No club chews up and spits out world class players quite like Real Madrid. Yet, their sense of entitlement, [ ... ]
football
'Quickly Kevin' Is The 90s Football Nostalgia Podcast To Beat...
While the majority of sports podcasts scramble to fill the minutes within the disruption of the [ ... ]
football
Where Did It All Go Wrong For Phil Neville And The Lionesses?
Winning, Phil Neville recently said at the SheBelieves Cup, is what would bring England’s women [ ... ]
football
''Drop A Few Hand Grenades'' Keegan's Advice To Scholesy The...
A packed out Wembley roared like one of those indomitable Three Lions to greet England’s new messiah. [ ... ]
football
Rise Of The Couch Coach: Coronavirus Causes 119% Surge In Football...
Thousands of us are flocking to virtual reality and gaming to help fill the void of no live football, [ ... ]
football
Review: Diego Maradona - Drop Yourself Into The Great's Chaotic...
When Diego Armando Maradona arrived at Napoli in 1984 for a world-record fee, the entire city ground [ ... ]
football
Arsenal's Tough Choice - Is Donyell Malen The Ying To Aubameyang?
Arsenal’s inability to manage the contractual situations of their biggest stars has plagued them [ ... ]
football
Robbie Fowler Is Making His Mark As A Manager With Brisbane...
The curtains came down on one of the last bastions of football standing in 2020 this week. Before the [ ... ]
This website uses cookies
Cookies help us and our partners provide statistics. By browsing this website, you consent to the use of cookies in accordance with our Privacy Policy and Cookies Policy.
Accept & Close