Football
News
The German netted his fifteenth goal of the season in the 2-0 win over Borussia Monchengladbach
Elliott Bretland
21:56, 16 Mar 2021

At Nurnberg, Ilkay Gundogan scored only eight goals in three seasons. At Dortmund he managed less than one every ten games and his biggest tally in one campaign at Manchester City before this one was six.

However, in the absence of Sergio Aguero this time around, it seems the midfielder has robbed the Argentine’s shooting boots. As Pep Guardiola's side beat Borussia Monchengladbach 2-0 on Tuesday evening in Budapest to reach the Champions League quarter-finals with a 4-0 aggregate victory, Gundogan plundered his 15th goal of the season to cement his place at the top of City's scoring charts. That’s right, he’s outscored Raheem Sterling, Gabriel Jesus and Kevin De Bruyne. In fact, he is now the top scoring German player within Europe's top five leagues across all competitions. He is on fire.

The strike at the Puskas Arena was an exquisite team goal expertly finished by the man of the moment. Phil Foden turned with such ease it looked like he was floating across the pitch. He drove forward and Gundogan made the perfect run, a run most strikers would be proud of, peeling left across the Monchengladbach defence. Foden found him with a no-look diagonal pass and Gundogan took a perfect first touch to set himself before poking the ball home past Yann Sommer.

For so long, he had been the man that keeps things ticking over in the midfield, previously letting David Silva and De Bruyne pull the strings when it comes to the attack. But this season, as City fly with confidence having notched their 24th win in 25 matches in Hungary, Gundogan has been everywhere. He has been like a dog taken off its leash. As soon as the ball is released he steams forward to fetch it and stick it in the back of the net. 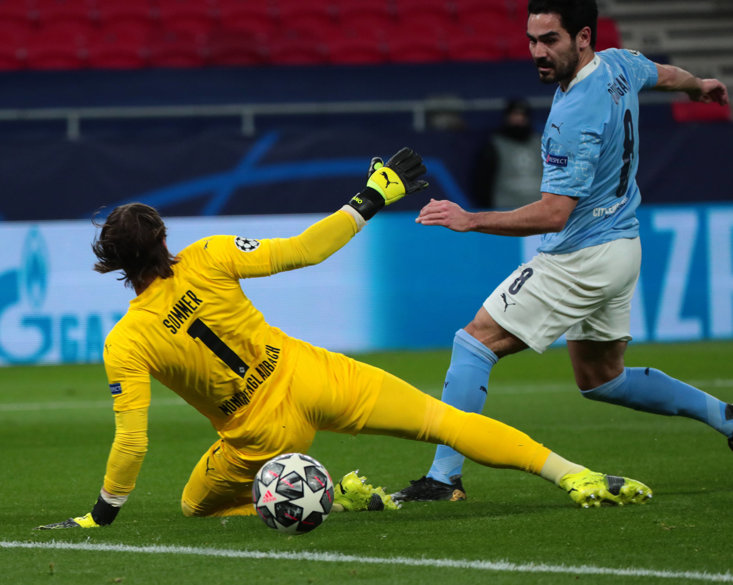 What is more incredible is his first Premier League goal of 2020/21 didn’t come until December 15th in a 1-1 draw with West Brom which preceded City’s winning run. He is the top scorer in the English top-flight since November 15th outdoing Bruno Fernandes, Harry Kane and Mohamed Salah.

City coach Pep Guardiola loves his teams to play football and express themselves and that attitude is clear to see in Gundogan. Those forward runs are coming natural to him and the goals are all the more amazing considering he is galloping from deep rather than finding himself in space as a number ten.

Before the game, Monchengladbach's social media team had jokingly dubbed the Premier League leaders as Manchester 'We Don't Even Need Strikers' City, after the team news was announced and showed playmaking winger Bernardo Silva was being deployed as a lone forward. As it proved, City really didn't need any strikers, for they had Ilkay Gundogan.

It was De Bruyne who got the opener though, unleashing a rocket of a shot on his supposedly weaker left foot which flew into the net off the crossbar after only twelve minutes. Gundogan doubled the lead six minutes later and it was job done. Monchengladbach were not scoring once, let alone the five they would need to advance.

"It was a good performance, we controlled the game from the beginning," Guardiola told BT Sport after the win. "This competition is tricky but after the two goals everything was easier - everyone in their position moved the ball quick.

"A lot of players like Phil Foden, Bernando Silva, they have a lot of quality, they help us a lot but everyone was so committed and we are delighted to be in the next stage."

Gundogan will be happy too. He is not a selfish player and that was clear, pointing to Foden for the sublime assist as his team-mates raced to congratulate him for scoring. He has hogged most of the goal headlines this season but everything he does is for the team.

Speaking to Sky Sports this week, he was asked to reveal his favourite strike. Pondering, never before having so many to choose from, he picked his second against Tottenham, explaining, "Not because of the goal I scored but because I saw the images of Ederson [who assisted the goal] on television after I scored.

"Seeing the happiness and the smile on his face was just great. It is not about my own personal success. In those situations, it is about the team."

Scoring goals gets you a certain amount of attention and Gundogan is adapting.

"It is kind of weird, to be honest,” he said of being City’s top scorer. “It is something that I am not so used to. I am not the sort of guy who likes to be the centre of attention but I just have to deal with it."

That didn’t stop him from netting again on Tuesday. Gundogan, and City, are unstoppable right now.