Few wrestlers have enjoyed a year like IMPACT World Heavyweight champion Moose. The former NFL star started the year, and ended it, holding versions of the world title. In the interim, Moose has teamed with wrestling icons, waged brutal chair-and-ladder infested wars, and ruined a Canadian hero’s moment by snatching his title in just seven seconds. The Sportsman spoke to Moose about all this and more.

You’re the IMPACT World champion. Previously, you had brought the defunct TNA World Heavyweight title back and declared yourself the champion. How do these two title reigns compare for you?

My character’s a little different in both runs. Right now as the IMPACT World Champion I'm a little bit more serious, maniacal. More of a villain, evil. Willing to do everything and anything to get his way, to hurt somebody. You know what I'm saying? When I had the IMPACT World Championship I was a different kind of heel. I wasn't as evil and vile and despicable as I am now. So both runs mean a lot to me but it's just the character that I am is different.

The way you won the title played into that despicable side, beating Josh Alexander in seven seconds after he’d just won the belt from Christian Cage. Do you feel like you’ll have a rematch with Alexander for the title at some point?

I don't know, I know he has a lot on his plate right now with JONAH, the ‘Top Dog’ or whatever he calls himself, having a bone to pick with him. So Josh is not any of my worries right now. And as we know already, in the main event of Hard To Kill I have a huge plate in front of me too. I have a seven-footer and Matt Cardona who I have to face off against. So I'm not worried about Josh and I'm sure he isn't worried about me right now.

You touched upon it there, in the main event of Hard To Kill you face W.Morrissey and Matt Cardona. What are your thoughts on your two opponents in that match?

I don't think Hard To Kill is going to be easy for me, I think I have a lot of work ahead of me. Matt Cardona has done a great job of getting the WWE off his shoulders. He can actually call himself a star, not that he wasn't a star in WWE, he just wasn’t as big of a star as he is now. He showed that he could be a guy you could put in the picture with top guys. And Will Morrissey, they both have shown that they could be top guys in any company. They've done a great job of doing that. So we have a huge matchup on January 8th, Hard To Kill and I'm looking forward to it. 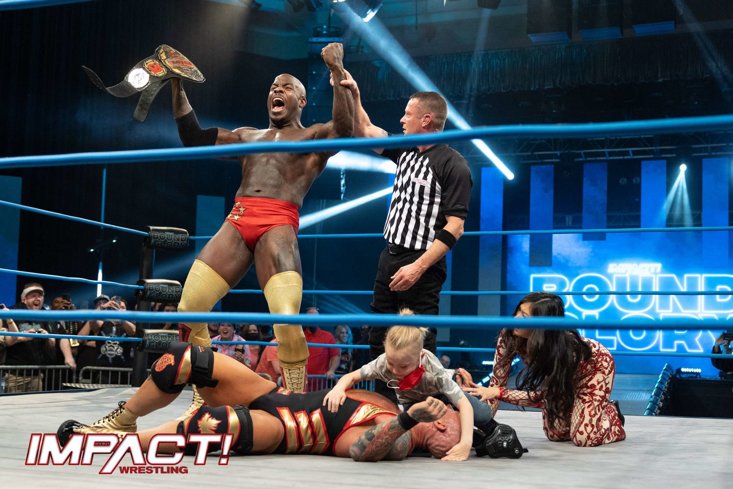 You got the opportunity to team with one of the all-time greats this year, when you competed alongside the legendary Minoru Suzuki. What was it like to work with Suzuki?

Oh, it's always good man. He's a legend in Japan and he has a huge following here in the States, it was amazing. I didn't get a chance to wrestle him, which I would love to at some point. But sharing the ring and getting some of his knowledge, it was big.

Oh I think it’s great. I think when a company is not wanting to work with another company, the only thing that hurts is the fans. But I think it's a good job when we all come together, especially for the fans. I think the fans win when we do that, so I'm happy it's happening and hopefully it keeps happening.

Through the IMPACT and AEW relationship, you got to work with Kenny Omega. What was it like to headline the Against All Odds pay-per-view against Omega?

Another standout match you had this year was your brutal Full Metal Mayhem bout with Eddie Edwards. What was it like wrestling such a physically-gruelling match?

Me and Eddie have a lot of chemistry, as the guy that I've wrestled in every kind of match you could think about. The match came off fantastic. We both were pretty sore the next day, and we both put each other through hell. But that's what one of those matches calls for.

Getting back to Hard To Kill. What can fans expect from what is set to be a huge show?

You have a dangerous seven foot wrestler in Will Morrissey, you're going to have a very rough-riding ‘Deathmatch King’ in Matt Cardona. We have the Good Brothers, I'm sure they're gonna be in action. You're gonna have great professional wrestling. And then you never know what surprises or who's going to show up because that's been a trend this whole past year.