Super League in 2019 has been skew-whiff to say the least.

At the top, St Helens have blown away the competition, wrapping up the League Leaders Shield well before the end of the season only to fluff their lines in the Challenge Cup Final last month, defeated by underdogs Warrington Wolves.

It still seems strange to call Warrington underdogs. After all, they’ve been second in the league for much of the season and they looked to be capable of pushing Saints all the way for the top spot with new recruit Blake Austin calling the shots.

Wigan have emerged as serious contenders after a turbulent start to the season but it’s the team in fourth - Ian Watson's Salford - who have been this year’s surprise package. They're a team that has become used to relegation battles but in 2019 they have a genuine chance of making the Grand Final which is held just across Barton Bridge at Old Trafford.

There has been a fair amount of drama at the foot of the table too where the prospect of automatic relegation for the bottom-placed team ensured an almighty battle to stay up. London Broncos, written off by many after their surprise promotion a year ago, have proved stubborn opponents and the fact they are still in with a chance of staying up at this advanced stage of the season is a credit to their highly-rated coach Danny Ward.

Even Super League heavyweights Leeds Rhinos had a flirtation with the Super League trapdoor while Wakefield Trinity, Huddersfield Giants and Hull KR are still not entirely safe.

On Friday, Salford go to Leeds, a fixture which in the past would have been marked down as a home banker. But this year’s Salford are an entirely different proposition and they know a win would secure them a play-off spot. Such a result is not beyond them on current form.

Last week, they beat an albeit understrength Challenge Cup winners Warrington at the AJ Bell Stadium which was their sixth successive win. It was the first time in their Super League history that they’d achieved such a winning streak and perhaps more impressively, it was the third time this year they’d beaten Warrington - two of those successes coming away from home.

BETFRED
@Betfred
One of the lowest budgets in the league. 💰
One of the smallest squads in the league. ✍
6 wins a row. ✅
Firmly in the play-off race 5⃣
Points difference of 177 ➕
Called up as Great Britain Assistant 🇬🇧
Ian Watson appreciation post 👏
@SalfordDevils 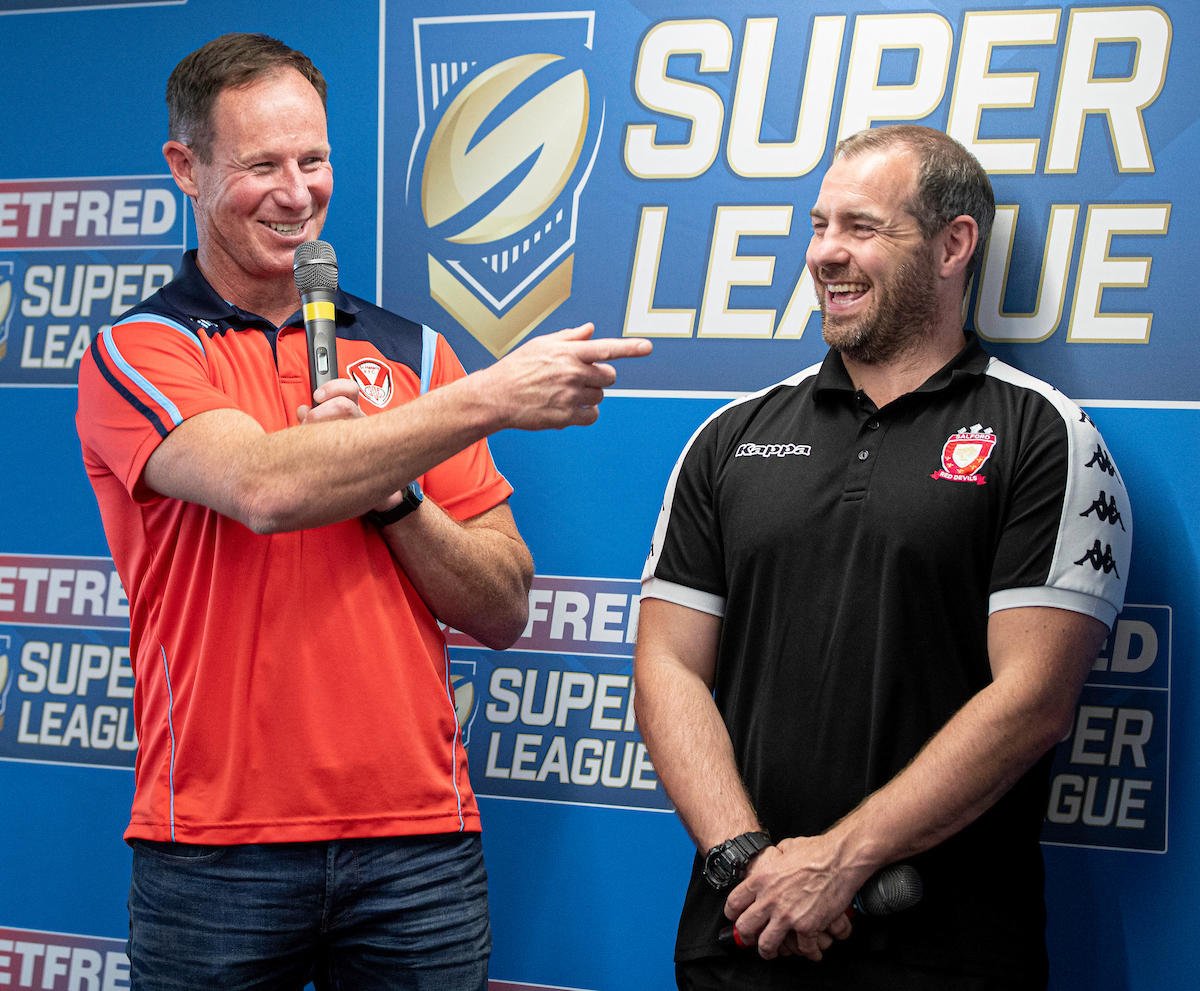 Some have dismissed Salford’s achievement, arguing the overall standard of the top flight this season has been well down on recent years. They are the same kind of arguments levelled at Leicester City when they won the Premier League in 2016. And while few could make a case for 2019 being a vintage Super League year, Salford don’t deserve to be just a sidebar in the season’s story.

Their key player, Australian half-back Jackson Hastings, could walk into any team in the competition and next year he will be playing on a bigger stage at Wigan. Hastings made the best debut I’ve ever seen, making tries and breaks for fun, before going off - apparently jetlagged - against Leeds. He did enough in that brief spell to suggest he was going to live up to the hype.

Hastings’ signing was seen as something of a risk at the time. Painted as a “bad boy” by the Australian rugby league press, he embraced life in Greater Manchester, becoming an instant hero and a positive force in the community. He helped Salford retain their Super League place in the 2018 qualifiers despite being suspended for two games - the two they lost.

Many expected him to leave the club before the start of the next campaign but he stayed and his role became even more important when another key player, half-back Robert Lui, was sold to Leeds. In a style almost indicative of Watson’s ability to get the best from players which has unsurprisingly drawn comparisons with Moneyball, he took Tui Lolohea from Leeds in return, slotting him into the Salford team where he produced the kind of performances which the Headingley crowds could have only dreamed of.

That’s not to say Salford are a one man team. The consistency of their spine, especially the dynamic full-back Niall Evalds, has been little short of amazing. Their pack is hard-working and honest, rarely getting bullied by even the very top teams. There's pace across the backline and reliability in defence.

Rugby Football League
@TheRFL
👏🔥 @SalfordDevils
👀 Would this effort from Salford on Thursday night get your vote for @Checkatrade Try of the Week...?
🏉 Send us your pick before mid-day tomorrow and it could feature in this week's shortlist!
12
123

Watson, who also played for the club, hinted recently that his players have only just started to realise how good they are, identifying a game against St Helens in May where the penny finally dropped. Salford lost that game 32-30 but they deserved to win, having been in the lead for long periods. A James Bentley try with 35 seconds on the clock broke Salford hearts that night but post-match Watson was not feeling sorry for himself, instead insisting that his team’s performance against the league leaders compensated for losing in such cruel circumstances.

It’s not surprising that success for Salford coincides with a settled managerial set-up. Prior to Watson’s appointment and under the stewardship of outspoken owner Marwan Koukash, the club had flitted from coach to coach and the turnover of playing staff was not conducive to a happy ship. Watson, who played for Wales, has also recently joined the Great Britain coaching staff to work with legendary Australian Wayne Bennett, fitting recognition for his progress.

The club narrowly avoided relegation in 2016 as they snatched a remarkable victory at Hull KR in the Million Pound Game, one of Super League’s most ridiculous concepts. Gareth O’Brien kicked a match-winning drop goal in extra time after 80 minutes where Salford were never actually in front.

Salford and their loyal fans are right to enjoy their time in the sun after such a turbulent few years which saw them leave their atmospheric old home - The Willows - for a purpose-built stadium in Barton. Like many similar relocations to out of town locations, the move has not gone without a hitch and attendances have suffered.

The club has worked hard to attract new fans and re-engage with lapsed Salfordians but it’s a tough sell for a stadium which isn’t close to a Metrolink stop and difficult to reach via public transport. An appearance in the Grand Final would change all that.

Salford Red Devils
@SalfordDevils
❤️ THIS IS WHAT IT MEANS!
🙌 How're we feeling today Salford fans?!
👏 Thank you to the 4,879 fans who made the trip down to the @AJBell_Stadium to support the lads last night!
💪 #TogetherStronger
56
336
More
rugby
Book Review - Pride And Passion By Warren Gatland
Halfway through this meaty autobiography, Warren Gatland, a confident and successful individual, comes [ ... ]
rugby
Why Rugby League Is Desperate For Government Help Amid Coronavirus...
On Sunday, rugby league had a rare moment in the spotlight. With no football on, Sky Sports invited [ ... ]
rugby
Book Review: Rory Best - My Autobiography
The last few years have been among the sunniest in the Ireland rugby team’s history. Yet [ ... ]
rugby
Eyewatering! 857 Million People Across The Globe Tuned In To...
Approximately 200 years ago, the world’s population was estimated at around 800 million people.  [ ... ]
rugby
Eddie Jones Admits ''I Don't Enjoy Coaching'' As Talks Linger...
Eddie Jones was not giving anything away when asked about his England future but did admit he doesn’t [ ... ]
rugby
New Look Wales Are Vulnerable To England's Intelligent Six Nations...
It’s no secret that, on their day, England have a power game to match most teams in world rugby. [ ... ]
rugby
Eddie Jones Is Determined To Squeeze Every Last Drop Out Of...
Eddie Jones’ team selection for England v Ireland got a lot of headlines, with five locks and [ ... ]
rugby
Huge Fall In Concussions At Rugby World Cup After Successful...
Rugby’s new high-tackle rule saw a huge decrease in concussion incidents at last year’s [ ... ]
rugby
England Channelled Their Inner Tyson Fury To Pummel Ireland...
Onslaught. According to the Oxford English Dictionary, the definition is: “an onset, assault, [ ... ]
rugby
Six Nations 2020: The Recent History Of England And Ireland's...
In a tournament packed with fierce and historic rivalries, England vs Ireland is a doozy. The history [ ... ]
rugby
Six Nations 2020: Can Wales' Defence Be The Difference Vs Recent...
Two nations once renowned for the flair have, in recent years, been written about for rather different [ ... ]
rugby
Six Nations 2020: Italy And Scotland Fight To Avoid The Wooden...
The match between Italy and Scotland has often been dubbed “the battle for the wooden spoon” [ ... ]
rugby
Russell Vs Townsend Is The Talk Of The Six Nations But What's...
Forget the Le Crunch, Calcutta Cup, England vs Wales, and the battle for the wooden spoon. This Six [ ... ]
rugby
Huw Jones: How A Sleepless Night Was The Making Of The Scotland...
It was a stranger’s bout of insomnia which brought Huw Jones to live out his Six Nations dream. [ ... ]
rugby
Eddie Jones Turns Defeat Into Victory With His Very Own Six...
It ended up being a threat more than a promise, but Eddie Jones' decision to name six forwards on [ ... ]
rugby
Owen Farrell Is A Leader Of Men - But Is He The Best Man To...
Alun-Wyn Jones has always been a leader. Ask anyone. But, for years, the softly spoken Sam Warburton [ ... ]
rugby
Meet The Englishman Teaching France To Play Like Wales In The...
It was in the home coaching box of the Stade de France that Shaun Edwards found himself on Sunday afternoon [ ... ]
rugby
Shaun Wane: A Proud Englishman And The Perfect Leader Of A New...
In appointing Shaun Wane as head coach, England’s rugby league team have injected everything that [ ... ]
rugby
Six Nations Big Questions - Why Do Italian Rugby Fans Keep Coming...
Here’s a stat for you - Italy have played 98 games in the Six Nations since they joined in [ ... ]
rugby
Six Nations Gamechanger - Amazon Launch The Most In-Depth Live...
Ever wanted to know the likelihood of a fly-half making a conversion or see just how effective your [ ... ]
rugby
''Absolutely Outstanding'' - Eddie Jones On That Time Fergie...
England head coach Eddie Jones has revealed to the England Rugby Podcast: O2 Inside Line exactly what [ ... ]
rugby
Six Nations 2020: Is It Time To Limit The Number Of Subs In...
In the run-up to the Six Nations this week, Nigel Owens has added his Welsh lilt to the growing [ ... ]
rugby
34 Players, 11 Different Clubs, 8 New Caps - Eddie Jones' Six...
Eddie Jones has named his England squad for this year’s Six Nations with 10 absentees from last [ ... ]
rugby
How Greece Beat Their Own Government To Set Up England World...
Under the cover of darkness, the coaches slipped away from the hotel with the passengers on-board unaware [ ... ]
rugby
Inspirational Captain Kolisi Takes Top Rugby Writer's Accolade...
The Rugby Union Writers’ Club has awarded one of their highest accolades to South Africa’s [ ... ]
rugby
New Coach Warburton Calls for ''Cool Heads'' From Six Nations...
Sam Warburton hung up his boots at the age of 29 and is now immersing himself in the world of coaching. [ ... ]
rugby
Sinfield Blown Away As Sell-Out Crowd Celebrates Rugby League...
Former Leeds Rhinos and England captain Kevin Sinfield has hailed the “unbelievable" show [ ... ]
rugby
Oops! These Are The Clumsiest Players And Teams Lining Up For...
The Six Nations is less than a month away as England, Ireland, Wales, Scotland, France and Italy gear [ ... ]
rugby
Book Review - Rugby: Talking a Good Game
Ian Robertson, the former BBC rugby commentator and one of its last distinctive voices of sport, left [ ... ]
rugby
''Many Things Went Very Well'' Claims GB Chief After Lions Tour...
The chief of UK rugby league has stunned Great Britain supporters by claiming “many, many things [ ... ]
This website uses cookies
Cookies help us and our partners provide statistics. By browsing this website, you consent to the use of cookies in accordance with our Privacy Policy and Cookies Policy.
Accept & Close