Boxing
News
The American says his attire was the reason Tyson Fury was able to beat him
Jack Porter
14:00, 25 Feb 2020

Few wouldn’t have expected Deontay Wilder to at least provide something resembling a vocal defence of his capitulation to Tyson Fury, after Fury entertained the watching world to a boxing masterclass at the expense of the Bronze Bomber in their blockbuster replay of the drawn encounter 14 months prior.

February 2020 in Las Vegas, Wilder, who had never previously suffered a defeat inside the ring, was floored twice before the Gypsy King claimed a stoppage victory in the seventh round and claim the WBC heavyweight title.

Quite ironically, Wilder, who was introduced to the unfamiliar scenario of being brought down to the canvas by Fury, was never going to take things lying down. The American pugilist was never going to slink back into the shadows quietly, with the expectation of him activating his rematch clause for a summer-time Part Trois, gaining predictable, but respectable, attention upon the backdrop of Fury’s celebrations.

Whilst Fury has gained universal plaudits for the manner of his victory, Wilder has now laid the blame of his own misguided decision before he had even entered the ring to face the Brit for a second time.

The Gypsy King opted to be carried into the MGM Grand Arena Pharaoh-style to the dulcet tones of Patsy Cline’s Crazy, Wilder instead followed up by sauntering through the arena accompanied by rapper D-Smoke, the boxer adorned in an intimidating, yet lavish costume, instilled with fiery red LED eyes seemingly designed to provoke fear into his opponent (Spoiler Alert: it didn’t work), the aesthetic would proudly have set him comfortably at a tea party alongside Sauron, the Black Knight from Monty Python, and Lord Buckethead.

His ‘blackness’ was the motive; from the black mesh across his face, the black cape that swirled around his back and the black skulls on each shoulder.  The battery-powered red lights weren’t isolated to the head, also running along his arms.

The 40lb outfit has ultimately come at a cost, according to Wilder, and the biggest cost of all - his title, and the first real blemish on his impressive 44-bout professional fighting career, with the weight of it to blame for his inability to efficaciously combat Fury. 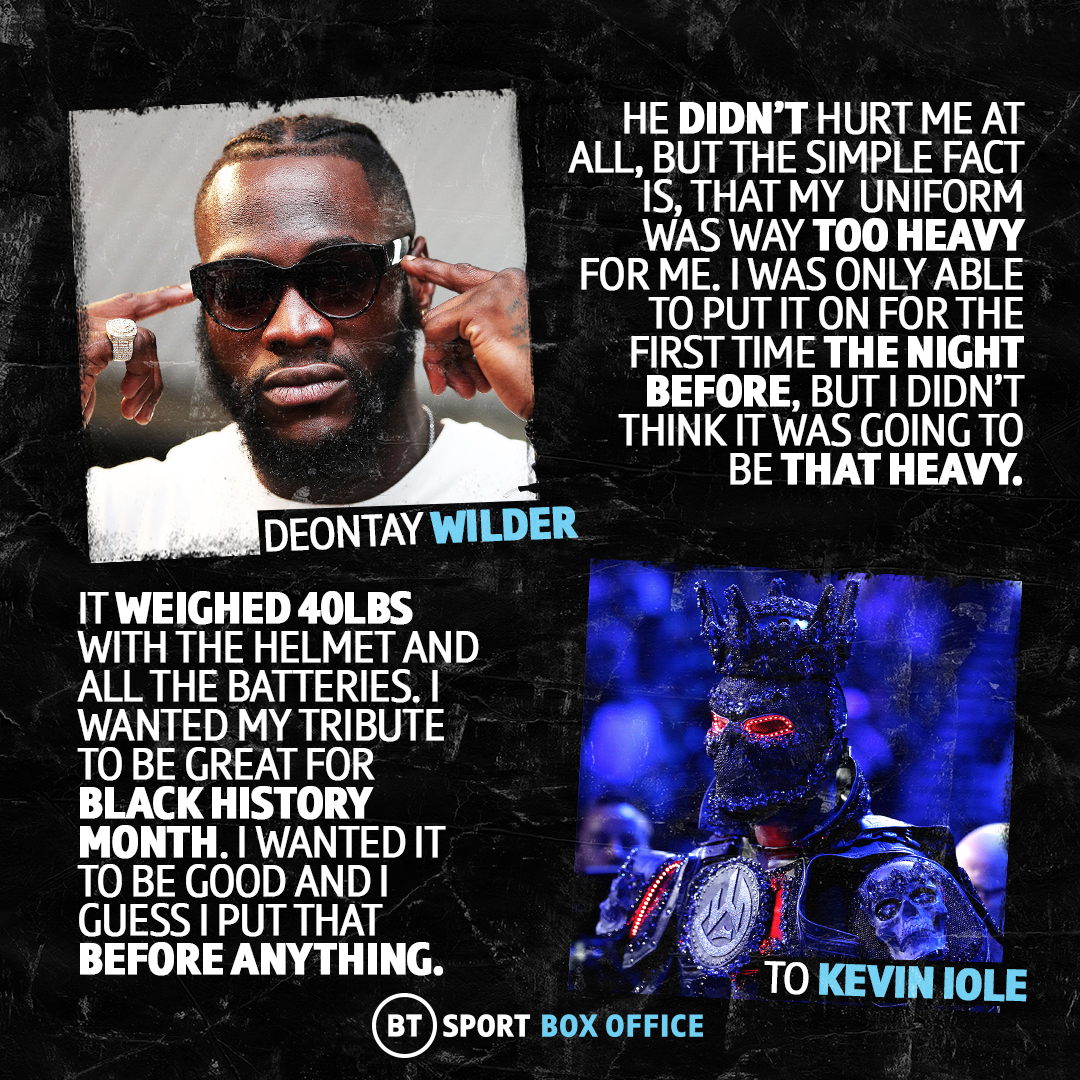 Wilder has deflected attention from the effectiveness of the fists of Fury - which left Wilder with a bleeding ear that had to be immediately stemmed in the aftermath in the locker room - to lay the blame on one particularly detrimental decision that was in no way inflicted by his opponent.

"My uniform was way too heavy for me,” Wilder told Yahoo Sports. He also admitted he had only tried the costume on for the first time on the night before the much-anticipated rematch.

“It weighed 40 pounds with the helmet and all the batteries. I wanted my tribute to be great for Black History Month … and I guess I put that before anything,” he added.

The Alabama native reportedly spent £31,000 ($40k) on the garb - created by Los Angeles-based costume designers Cosmo and Donato - purely for the ring walk, having sported similar menacing headgear throughout his career, claiming that the appearance adheres to his Bronze Bomber persona, Wilder has revealed that the masks have an energy that he ‘feeds off’.

“Putting the mask on is like a blocker, I zone in,” Wilder told TMZ before his latest battle with Fury, “Most definitely it’s a strange feeling. The mask is everything for me. When my mind transforms it is a scary feeling. It is a source of power that takes over and allows me to feel like I know I can.”

At the most recent marquee event against Fury, while the reason and the representation of Black History Month in his trademark is admittedly admirable, the decision has proven foolhardy. Wilder sacrificing success for statement, and a statement that could have been conveyed better, more effectively without the expense of his status as the heavyweight champion of the world.

Both the costume and the excuse now consigned to the vaults of boxing history, it’s something we’d be unlikely to see should a third bout between the two roll around later this year.