Heavyweight contender Dillian Whyte has hooked up with legendary trainer Buddy McGirt in a bid to rebuild his career. ‘Bodysnatcher’ lost to Tyson Fury in a challenge for the WBC and The Ring heavyweight titles in April. While that sixth-round stoppage defeat at Wembley Stadium took place just five months ago, Whyte returns to a division that has changed a lot since he last fought. Where does ‘The Villain’ fit into this brave new world?

Hiring McGirt feels like a sensible step. The former two-weight world champion has steered several illustrious world champions, including Arturo Gatti, Antonio Tarver, Paulie Malignaggi and Sergey Kovalev. McGirt also steers the careers of former super middleweight king Callum Smith and unbeaten WBO middleweight Janibek Alimkhanuly. In short, if you’re good enough then Buddy will get you there. He replaces Xavier Miller, who has worked with Team Whyte since 2019.

Whyte will move to California to plot his comeback. It will be the third time he has had to rebuild from a defeat but this time feels different. Losing to Anthony Joshua in 2015 was a wake-up call and Whyte knew ‘AJ’ would be rushed through to world level with no thought given to a rematch. While Joshua beat Charles Martin to become IBF champion in his very next fight, Whyte would next appear against Ivica Bacurin in an eight-rounder.

When Whyte was shockingly KO’ed in Eddie Hearn’s garden during the height of pandemic boxing weirdness, the route back was clearer. At 41 and having already lost world championship challenges to Joshua and Wladimir Klitschko, there was no clamour for Povetkin to get a title shot. This meant a convenient serving of revenge for Whyte, who knocked the Russian out six months after their first meeting.

But this time there is no clear path to redemption. Whyte’s disappointing showing against Tyson Fury was far from worthy of a rematch. Even if it were, British boxing is currently locked in the on-again-off-again soap opera of ‘The Gypsy King’ potentially meeting Joshua. But revenge is still on the mind of ‘The Villain’. If Fury/’AJ’ doesn’t happen, Whyte has offered to step in and fight Joshua instead. It would be a huge fight in this country, even if admittedly not on the scale as the proposed Fury-Joshua match. 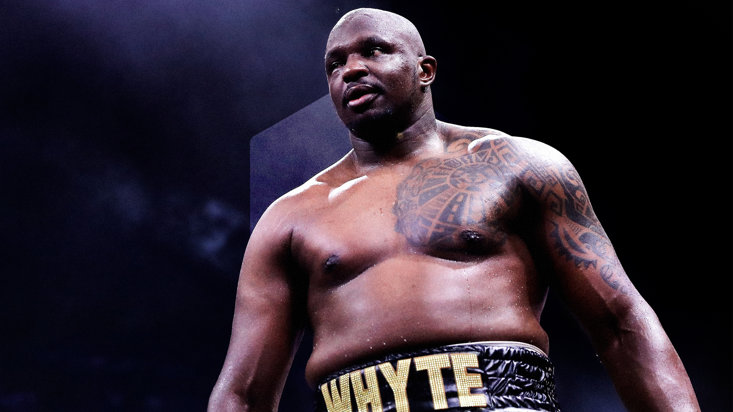 Another potential option is the man of the moment Joe Joyce. ‘Juggernaut’ is riding high off a knockout win over Joseph Parker in his first pay-per-view headliner. Joyce proceeded to call out almost every living heavyweight in his post-fight comments. Whyte was one of them, with Joyce calling a potential fight with the Jamaica-born star as “a car crash” and “a war”. As comeback fights go this would be ridiculously difficult for Whyte, but he has built a reputation as a fighter who never shirks a challenge. ‘The Villain’ has faced six former or future world champions in his career, the same amount as Joshua and more than Fury.

A lot can happen in five months. Fury has retired and come back three times since Whyte last fought. Joshua lost to Usyk and entered talks with Fury. Joyce had his coming out party, Daniel Dubois picked up the WBA ‘regular’ belt, Andy Ruiz Jr beat Luis Ortiz and Deontay Wilder announced his comeback against Robert Helenius. In less than half a year, the complexion of the heavyweight division has changed. Armed with Buddy McGirt, Whyte must now find out where he fits in.

x
Suggested Searches:
The Sportsman
Manchester United
Liverpool
Manchester City
Premier League
More
boxing
Tyson Fury On Retirement: I’m Not Built For A Normal Life
Tyson Fury returns to the ring this weekend when he puts his WBC heavyweight world title on the line [ ... ]
boxing
Mike Tyson, Floyd Patterson And Boxing's Youngest Heavyweight...
On this day in 1956, Floyd Patterson stopped the great Archie Moore in five rounds to become the heavyweight [ ... ]
boxing
Everything You Need To Know About Estrada Vs 'Chocolatito' III
Not all trilogies are created equal. But a rivalry poised at one win apiece, with each previous meeting [ ... ]
boxing
On This Day In 2015: Tyson Fury Ends The Wladimir Klitschko...
Tyson Fury walks into Tottenham Hotspur Stadium this Saturday as a proven commodity. As he makes his [ ... ]
boxing
What Does Dillian Whyte Have Left? Controversial Win Leaves...
Whatever you thought of the decision, something wasn’t quite right about Dillian Whyte’s [ ... ]
boxing
Tyson Fury vs Derek Chisora III: Everything You Need To Know...
Tyson Fury puts his WBC heavyweight title on the line this weekend when he meets Derek Chisora in the [ ... ]
boxing
Gorman Vs Wardley Is A Throwback Fight Worthy Of The British...
On Saturday night, Fabio Wardley and Nathan Gorman will honour one of the great British boxing traditions. [ ... ]
boxing
Five Blows From The Body Snatcher: Dillian Whyte's Greatest...
Dillian Whyte will be looking to bounce back to winning ways this weekend when he takes on undefeated [ ... ]
boxing
Carl Froch Vs George Groves And Boxing's Great British Grudge...
Nine years ago today, Carl Froch and George Groves collided at the Manchester Arena, waging the first [ ... ]
boxing
Dalton Smith: 'Get A Couple Of Million And I'll Smack A YouTuber!'
Dalton Smith is a star on the rise. The Sheffield super lightweight has just made the first defence [ ... ]
boxing
Zach Parker Vs John Ryder: Everything You Need To Know
The WBO interim super-middleweight title is on the line at the O2 Arena this weekend in a fascinating [ ... ]
boxing
Dillian Whyte Vs Jermaine Franklin: Everything You Need To Know...
Heavyweight contender Dillian Whyte will be looking to bounce back to winning ways this weekend when [ ... ]
boxing
Gervonta 'Tank' Davis And Ryan Garcia Agree To Mouthwatering...
WBA ‘regular’ lightweight champion Gervonta Davis has agreed a fight with unbeaten contender [ ... ]
boxing
The Weekend Boxing Preview: European Titles, Unbeaten Superstars...
After a star-studded weekend where old stagers Ricky Hatton and Floyd Mayweather took part in exhibitions, [ ... ]
boxing
Martin Scorsese At 80: Celebrating Raging Bull, The Iconic 'Anti-Rocky'
“And though I'm no Olivier, if he fought Sugar Ray he would say that the thing ain't the [ ... ]
boxing
Why Dmitry Bivol Should Make 'Canelo' Come Back To 175 Pounds...
Saul ‘Canelo’ Alvarez has targeted a May return to the ring, after having surgery on his [ ... ]
boxing
Fury-Wilder 4 And Usyk-Hrgovic: The Heavyweight Fights Nobody...
Ask any boxing fan which heavyweight fight they would cherish above all others and you’d get the [ ... ]
boxing
The Panel: Should Women's Boxing Move To Three-Minute Rounds?
Welcome to The Panel, where we speak to a group of star names from across the fight game about the big [ ... ]
boxing
A Tale Of Two Exhibitions: Ricky Hatton And Floyd Mayweather...
On 8th December 2007, Floyd Mayweather defeated Ricky Hatton in Las Vegas, with the WBC and The Ring [ ... ]
boxing
Tommy Fury vs Paul Bamba Cancelled: Is Fury Unprofessional,...
Tommy Fury’s stock has never been lower. This weekend, when due to fight Paul Bamba, he weighed [ ... ]
boxing
Redemption Day: Natasha Jonas Clinches The Treble Against Marie-Eve...
A year ago, Natasha Jonas’ two most recent fights were a pair of failed attempts to win world [ ... ]
boxing
Chasing Gold: Conner Tudsbury Determined To Become A Mancunian...
There was something of a media circus the day Moss Side Fire Station Boxing Club opened its doors in [ ... ]
boxing
Haney-Lomachenko, Stevenson-Cruz And More Ordered At WBC Convention
The World Boxing Council hosted their 60th annual convention, in which they laid out plans and policy [ ... ]
boxing
'You Want Homer To Fight Tatum?!': 26 Years Of 'The Homer They...
It was a heavyweight title fight like no other. Watched by 9.7 million viewers on its initial airing [ ... ]
boxing
Back From The Brink: Natasha Jonas Has Gone From Nearly Girl...
A year ago, Natasha Jonas had failed to win her last two bouts. The decorated amateur had seemed nailed [ ... ]
boxing
This Is Hitman Heritage: The Very Best Of Ricky 'The Hitman'...
Ricky Hatton returns to the ring this Saturday in an exhibition bout against legendary three-weight [ ... ]
boxing
Ricky Hatton vs Marco Antonio Barrera: Everything You Need To...
British boxing legend Ricky Hatton returns to the ring this weekend for the first time in nearly a decade [ ... ]
boxing
Ricky Hatton On Fighting Barrera, Hitting Campbell With Body...
British boxing legend Ricky Hatton returns to the ring this weekend for the first time in a decade when [ ... ]
boxing
Sunny Edwards Vs Felix Alvarado: Everything You Need To Know...
Flyweight world champion Sunny Edwards defends his IBF title on Friday in Sheffield when he collides [ ... ]
boxing
Logan Paul's WWE Career Is The Perfect Antidote To Jake's Boxing...
Logan Paul woke up on Sunday morning with a torn meniscus, torn MCL and a potentially torn ACL. The [ ... ]