Football
News
The Soccer Saturday host will leave the show at the end of the season
Simon Lillicrap
15:01, 02 Nov 2021

Saturday 3pm kick-offs are a tradition as old as time in the United Kingdom. The television blackout means that unless you are at a game, the best way to consume all of the football that takes place every weekend is Sky Sports’ now iconic Soccer Saturday and thanks to its riveting host Jeff Stelling, you feel part of the action.

Now, the man who has steered us through Saturday since 1994, has decided to call it a day at the end of the current season. He has been a key pillar of the sport for nearly three decades and for an entire generation, they have grown up with him as a face of football. He’s also seen a transformation in the game, from the early days of the Premier League to the global game we now see on our screens, with footballers that are paid huge amounts in comparison to their predecessors.

Yet despite all the change, Stelling has remained consistently brilliant. His natural sense of timing and humour adds another level to the show, while his close relationships with both his co-hosts and reporters at the grounds appears to be completely genuine.

Then we come to the almost-impossible logistics of his job. The amount of research Stelling does, and the amount of knowledge he possesses to deliver on the nose statistics whenever a goal happens, or a red card occurs - from the top of the Premier League down to the bottom of the National League is remarkable.

The way he glances down at his notes before looking down the camera while being fed information through his ear and then manages to form coherent and entertaining sentences on cue is a skill that has been perfectly honed over the last 20 years - and he hardly ever makes a mistake. More to the point, how on earth does he remember the names of all the reporters at grounds all over the country!

His links are sublime and his love for the game is almost unmatched. Yet the best of Stelling is arguably saved for the ‘rants’ he is now famed for. His impassioned speech about the city of Newcastle, the New Year’s honours list or even his hatred of VAR show him at his unfiltered best. These are the moments we tune in for, but the 66-year-old has also guided us through some of football’s most dramatic scenes. 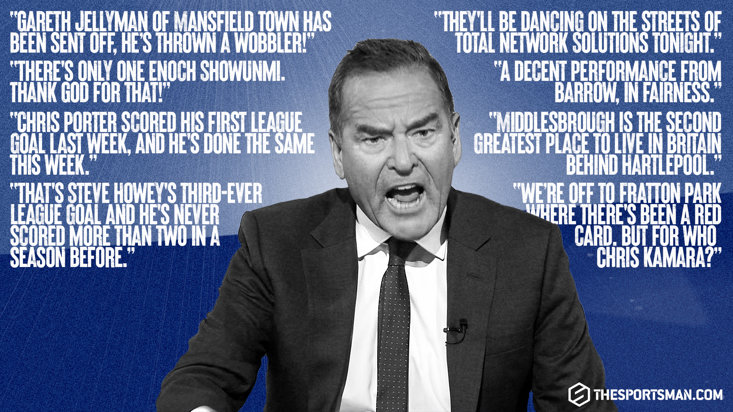 From Jimmy Glass’ last minute goal that saved Carlisle from relegation to dramatic final days, Stelling has always managed to convey the emotion in key moments. But what is a real credit to him and the show, is the fact that they have also produced incredible moments that you simply can’t see elsewhere. Chris Kamara’s “I don’t know, Jeff”, Charlie Nicholas’ hilarious attempt at glasses banter and even the studio’s reaction to the Aguero and Deeney goals have become must-see clips on YouTube - which just shows how lovable the format has become.

In an era where football content is streamed on every platform and highlights are instantly available on social media, the fact that a programme which essentially depicts former sportspeople describing football matches to you has been such a resounding success is remarkable.

Perhaps Laura Woods summed it up best when she posted on Twitter:

“I’ve always watched Jeff and thought he makes presenting look exactly how it should look. Really, really fun. But he also always gets the tone right. No matter the situation. And I’ve come to learn that’s quite rare. A giant of a personality that Sky won’t replace.”

A giant of a personality and a giant of a man. Jeff Stelling has been an unflappable figure on our screens for the last 27 years and will be sorely missed. He isn’t just unbelievable - he is almost irreplaceable.